Posted on November 30, 2012 by the drunken cyclist

It is the end of another month and thus time for another installment of the Ohmygod saga (the first installment can be found HERE, the second  HERE, and the third HERE). As you will recall, I used to be a cycling tour guide in Europe for several years. Through that job (yes, it is a bit difficult to call it a ‘job’) I met countless interesting people and have a few compelling stories to tell, but most of them pale to the story of Ohmygod, one of the clients that I had for two weeks. Some may wonder about the moniker, but the name chose itself really; it is what I uttered repeatedly during just about every interaction with him.

After helping Ohmygod scrape himself up off the ground (I did not bother to ask him what had happened or if he was OK once he was off the deck since he quickly remounted his bike and rode the remaining seven feet to the hotel front door) I put my bike in the garage and headed up to my room. It was about 6:30 at this point, so I had some time to possibly catch the end of the replay of the Tour de France stage before getting ready for dinner. While I really do like bike racing and watching it on TV, most races are only slightly more interesting than watching paint dry. Within minutes, I was asleep. I woke up and it was already close to eight so I went down stairs to see if any of my charges were milling about, waiting to go to dinner. The first night of the trip was a ‘free’ night (meaning they were free to go anywhere for dinner since they were on their own), but I usually go to dinner with at least a couple people instead of eating alone.

Tonight was different, however. While I would not have minded eating with Grumpy or Mr. Personality, the thought of spending my ‘free’ night with Ohmygod convinced me to skulk out of the lobby as quickly and as stealthily as I could. I made my way across town and had a nice dinner over looking the Loire River with a lovely bottle of Sancerre all to myself. After a glass of twenty year tawny for dessert, I headed back up to the hotel. Of course, I could not help passing by my favorite bar and as I did, I heard that distinctive laugh that indicated ‘American’. So I went in. Of course I went in mainly to get my drink on, but also to hopefully smooth things over in the bar. I had been in the bar countless times and I knew the people who ran it well. I thought I could help calm down the Yanks before they made our international reputation even worse.

Sometimes I really think I am an idiot.

I completely forgot that I told the three musketeers about my favorite bar in town. Surely enough, there they were, at a table just off the bar with Grumpy and Mr. Personality laughing hysterically as Ohmygod looked a little lost, even pathetic. For the first real time, I felt bad for Ohmygod—while Grumpy and Mr. Personality were both nice guys, it appeared that they were having a bit of fun at the expense of the third. Yes, he provides limitless fodder for ridicule, but I still felt responsible. Thus, even though I had entered the pub unseen by the trio (and I could have therefore escaped unscathed), I felt the need to join the ‘party’.

I was all ready to chastise the other two and come to the defense of Ohmygod when I plopped down at their table. After a few short minutes, I realized why Grumpy and Mr. Personality were laughing: Ohmygod was drunk. The look on his face that I perceived as being victimized was actually the inability to focus on anything–he was completely plastered. Apparently, the three of them went to dinner together (which made me feel bad for ditching them–but only for all of about seven seconds), where Ohmygod drank a single beer, while the other two shared a bottle of wine.

So how did he get so wasted on one beer? Apparently, he only ordered one beer at dinner because he is a “cheap bastard” (Mr. Personality’s words, trying to reaffirm his own moniker). When he got to the bar, though, he ordered another beer and then proceeded to ask just about every other patron in the place, as they got down near the bottom of their glass, if he could drink the rest of their beer. The stunned customers did not really know how to respond (partially no doubt, since Ohmygod was asking in English and all of the other people in the joint were French). Ohmygod took this moment of inaction as acquiescence and would snatch the beer, chugging the remains before they knew what happened. To my amazement, all of the victims reacted with bewildered laughter (that’s the French for you–avoid all conflict, particularly when someone else is breaking the rules–they also might have thought the guy was a deranged serial killer and did not want to become the next victim, but I did not take a poll). This act continued until he was sufficiently sloshed that he could no longer hone in on his victims.

Seeing that Grumpy and Mr. Personality were also well on their way to inebriation, I decided that I needed to escape. Yes. I am a horrible person. I know that. The way I looked at it though, I was going to have this guy on my trip for two weeks and I needed to pace myself.

So I slipped out.

Yes, I know where I am going when I die.

The next morning, I head down for breakfast. I sit there for about an hour, but none of the three come into the room. I knew that Grumpy and Mr. Personality would be more or less fine (I had given them the route and run down of the day and they actually seemed to be paying attention).

Nope. Not worried about them.

I am worried about Ohmygod since I have never known him to miss a free meal (breakfast was included with the hotel).

I decide to go to his room to get him moving since I did not see him at breakfast. When he answers the door, he is in the same biking gear that he wore to the bar the night before (although he ditched the tights for biking shorts). Today is actually the first day of riding (if you discount the ‘ride’ from the station that ended rather abruptly), so I decide to cut him some slack. He is not packed, although he appears to have eaten. I know he is not packed since there is crap everywhere–he had only been in the room for about 10 hours total, but it seems that it might take at least that long to get it back to ‘normal’. I figure he had eaten, though, since he still has most of a croissant (?) on his chin and in the folds of his mouth. I realize it is entirely possible that the remnants might be from the meal the previous evening, but there is no time (nor desire) for clarification.

Before I can even utter a word, a gasp, a sigh, or ponder the opening paragraph of my resignation letter, he tells me that he has a problem.

He says that he has been robbed–he can’t find his wallet which contained all of his money and his identification. 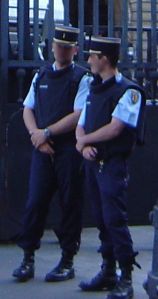 In my many years as a tour guide, I only really wanted to avoid three things: having to take a client to the hospital (since more than likely that would involve blood and I get queasy opening a bottle of ketchup), having to go to an Embassy or Consulate to deal with multiple levels of bureaucracy, and dealing with the French Gendarmes. After receiving this information from Omygod, I realized that all three were distinct possibilities in the next few hours. We were going to have to go to the gendarmes to report a ‘crime’, then the Canadian embassy and lastly I would have to go to the hospital so they could treat my aneurism.

See you next month….

I have been an occasional cycling tour guide in Europe for the past 20 years, visiting most of the wine regions of France. Through this "job" I developed a love for wine and the stories that often accompany the pulling of a cork. I live in Houston with my lovely wife and two wonderful sons.
View all posts by the drunken cyclist →
This entry was posted in Travel, Wine and tagged Biking in France, Blois, Loire Valley, Ohmygod. Bookmark the permalink.