Recounting the Worst Ten Days in my Life (This Should Be Fun): Part Five—The Hospices de Beaune

Late last fall, what first seemed as a rather innocuous email turned into a press trip to both a region I had never visited (Beaujolais) and an event of near mythic proportions (Hospices de Beaune). I took the opportunity to also spend some time visiting some dear friends in Paris before turning southward.

My trip to France came on the heels of the Wine Bloggers Conference where I got very little sleep, and coupled with a sleepless overnight flight, I was at best on fumes. My greatest fear–being ill during two rather important wine-centric events–was a distinct possibility.

After a brief stay in Paris and a wonderful dinner in Savigny-lès-Beaune, I feared that the lack of sleep would finally catch up to me….

Before going to the Hospices de Beaune, I honestly did not have a firm grasp of what it was. I knew that it was an annual celebration of Burgundian wine centered around an auction for charity, but that was about it. I knew that the term was used for both the auction as well as the physical building in the center of Beaune; a former charitable hospital that provided care for the poor. 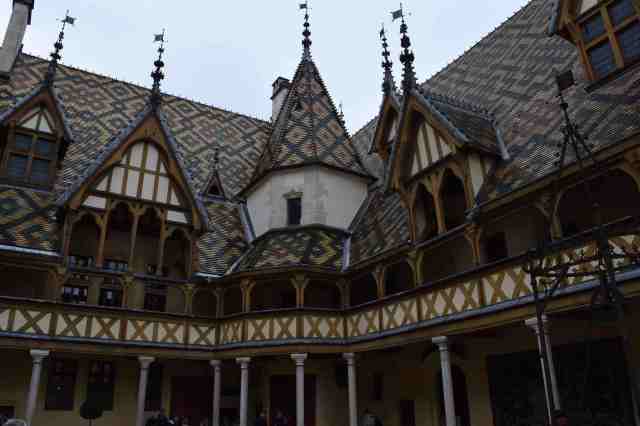 I have been to the Hôtel-Dieu countless times…

Nicolas Rolin established the Hospices de Beaune in 1443 at a time when the residents of Beaune were destitute, suffering from results of the Hundred Years’ War and the Bubonic Plague. He recognized the need for a hospital to serve the residents of the town and construction of the Hôtel-Dieu (a hospital for the needy) was started soon thereafter.

…and it truly is a remarkable structure even on a gloomy day.

In 1453, the Hospices received the donation of its first vineyard, the beginning of what would become over 60 hectares (138 acres) of mostly Premier and Grand Cru vineyards throughout Burgundy. Over the years, those vineyards served as the major source of income for the Hospices (which remained an active hospital until 1970).

For over 150 years, the wines produced from those vineyards have been auctioned off, in barrel, shortly after harvest on the third Sunday in November in what has become known as the Hospices de Beaune (it is officially called the “Venue des Vins des Cuvées de la Récolte du Domaines des Hospices de Beaune” but shortened for obvious reasons). The money raised is used both for the upkeep of the Hôtel-Dieu as well as improving the modern hospital. 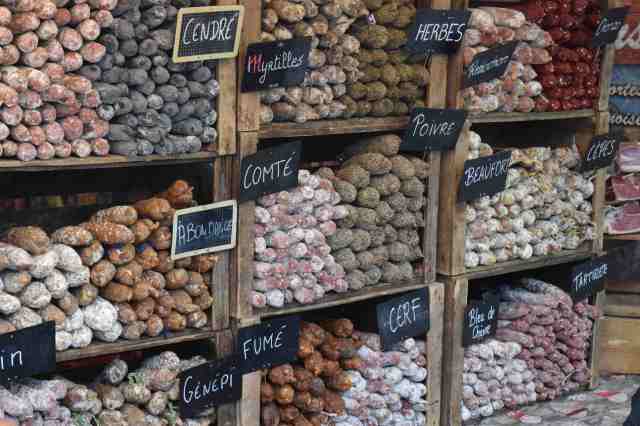 There are hundreds of stands set up all around the town, for purveyors of sausage… 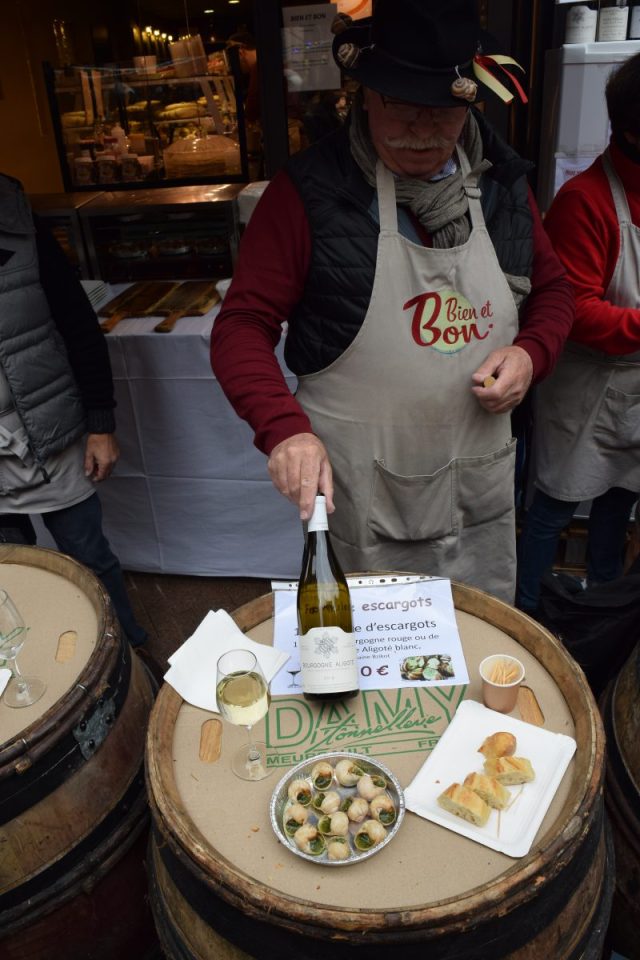 …and of course, snails, perhaps the Burgundian speciality.

I, of course, had one of the worst colds of my life (I am pretty sure it had to be the flu), but there were two events that I simply could not miss. The first was the private tasting for the press of all the wines up for auction on Saturday afternoon. After the walk around tasting the day before, I immediately went to bed and stayed there for about 16 straight hours.

The tasting was to start after a lunch provided by Les Vins de Bourgogne, which like all of the other ancillary meals and parties, I skipped. I simply did not have the energy nor the olfactory ability to appreciate any of it. So I stayed in bed until the last possible moment before the tasting. Good thing. I needed to conserve as much as I could to brave the hordes.

The crowds in the streets of Beaune during the three days of the Hospices are intense. 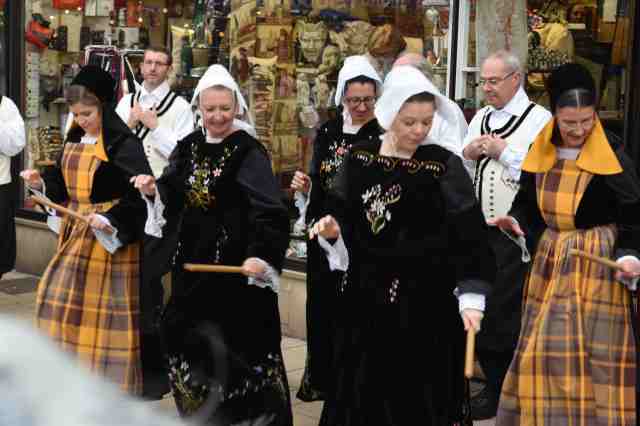 And there are performing folklore groups…

I made it back to the Hôtel-Dieu just as the tasting was about to start and then something hit me. I had not experienced it for days, so it was a bit odd, but … I was able to smell! It was some sort of Hospices miracle, but as I sat down to taste through all the wines being auctioned off, my body realized the significance and decided to pull itself together just enough to experience the wines.

The journalists assembling for the tasting.

As is the custom in Burgundy, one starts a tasting with red. This was the most richly intense wine of the tasting. Whoa.

But this was the best red, at least for me. Intense red berries and mocha, with a finish that lasted for minutes. Whoa. 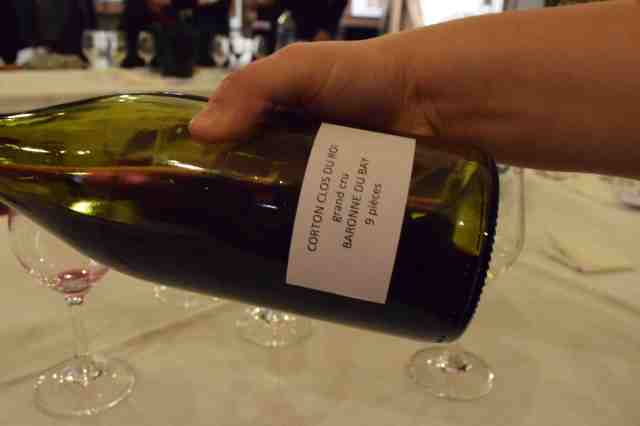 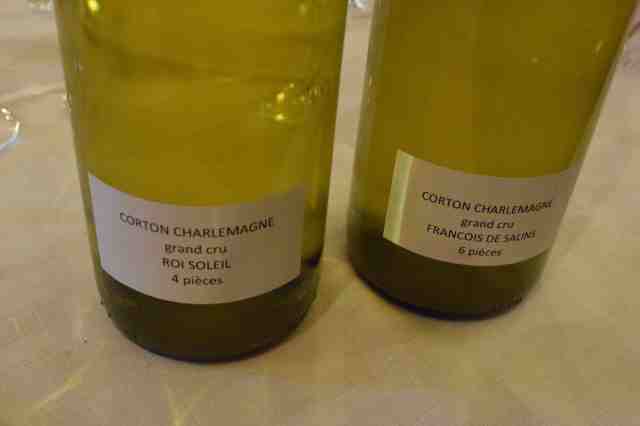 Then it was on to the whites. Here were two of my favorites, but the Bâtard-Montrachet was clearly the queen of the whites. 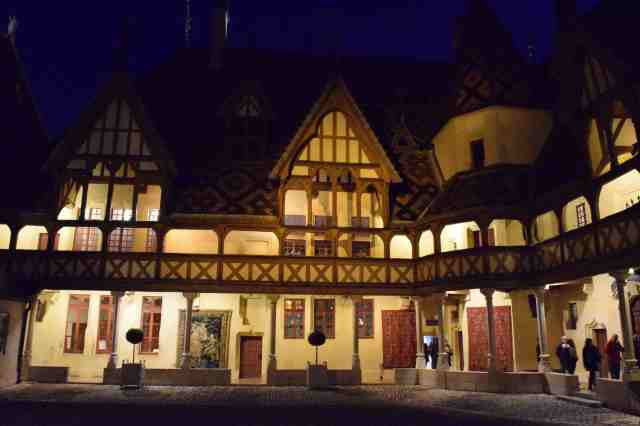 By the time I left, night had fallen.

And I had to fight the crowd to get back to bed.

I finally did eat, chicken with a dijon mushroom sauce that I was able to whip up. And yes, I had wine. I was sick, not dead.

The following day was the second must-attend event: the auction itself. I had planned to stay for the whole event, but I just couldn’t—I felt like complete crap and sitting through a three-hour auction was just not going to happen. I did stay for a few pictures, but then rushed back to bed. I was going down to Beaujolais the next day—the “real” purpose of my trip to France.

The auction hall, right across the street from the Hôtel-Dieu.

This guy is just dying to bid.

After a bit of time, I just had to leave and go back to bed, but I would need to fight the crowd once more. They had gathered to watch the auction outside on the big screen. 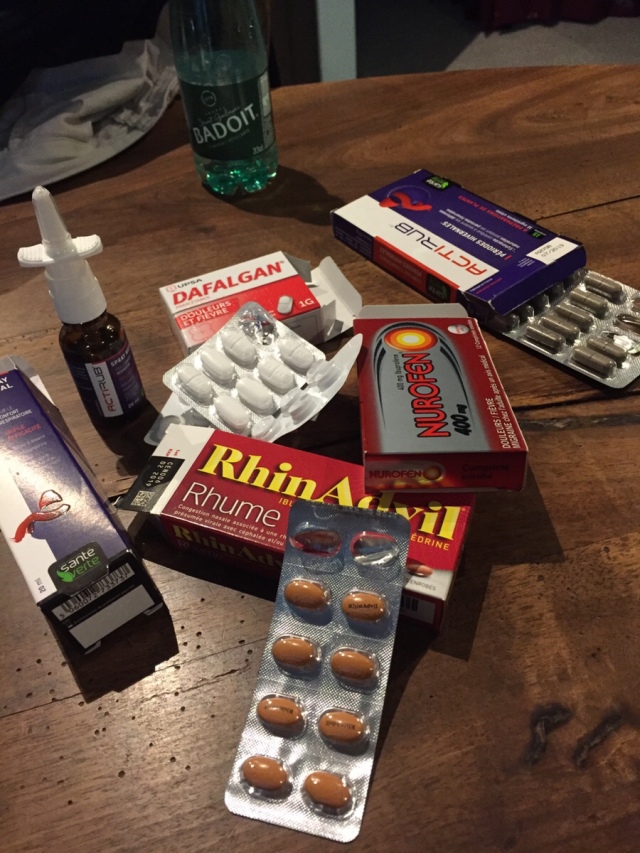 Another round of drugs awaited.

I have been an occasional cycling tour guide in Europe for the past 20 years, visiting most of the wine regions of France. Through this "job" I developed a love for wine and the stories that often accompany the pulling of a cork. I live in Houston with my lovely wife and two wonderful sons.
View all posts by the drunken cyclist →
This entry was posted in Burgundy, Chardonnay, Pinot Noir, Wine. Bookmark the permalink.

2 Responses to Recounting the Worst Ten Days in my Life (This Should Be Fun): Part Five—The Hospices de Beaune