An Unbelievable Find in Montbard

The day was much like any other over the course of the previous fortnight, the ride had been challenging, but far from “hard.” It was the penultimate night—the group would be breaking up the following evening in Dijon, the capital of Burgundy.

On the way to Montbard, we passed through Epoisses, where we had lunch with the best cheese in the world, of course.

We were in Montbard, a rather nondescript, small (population ~6,000) industrial town in the Côte-d’Or Department of Burgundy, about 75 kilometers northwest of the town that is synonymous with mustard, snails, and wine. There are no vineyards anywhere near Montbard, however. In fact, there is not much of anything in the town with two notable exceptions: The Abbey of Fontenay, a UNESCO World Heritage Site, about 10 kilometers out of town, is perhaps the most important Cistercian abbey in the world, and the TGV train station where about half of the trains from Paris to Dijon stop.

I had last been in Montbard almost a decade ago, and to my best recollection, it had not changed. Not one iota. The hotel, the same spot I stayed nearly 10 years prior, was largely unchanged as well—I remembered the hotelier, a perfectly nice woman, now in her mid-40s, who, after a bit of prodding, seemed to remember me as well (in sleepy little French towns, I doubt they encounter many 6’4” Americans). As I headed to my room, off in a little nook of the second floor, I also remembered the exposed beams of the 16th-century structure, causing me to nearly double over to avoid a severe head trauma (I doubt the builders envisioned 6’4” Americans either).

Like many hotels in France, it had an attached restaurant where we would be dining in just an hour or so. I had no specific memory of the last meal I had there, but I am sure that it was fine. In fact, I am sure that it was more than “fine,” since it is my contention that it is very difficult to eat poorly in France. The French take great pride in their cuisine and it seems that everyone got the memo—one has to actively look to find a regrettable dining experience anywhere in the country.

As we sat down for the meal, I performed my role of translating the menu and explaining the available options. Once complete and the clients were contemplating their selections, I turned to the wine list to order a couple of bottles for the table. The group had been particularly fond of bubbles (which was, of course, fine with me), and there was a nice Crémant de Bourgogne front and center on the first page.

Then I turned the page.

This must be an error.

As if on auto-pilot, I rose and made my way to the owner of the hotel, the woman who had recognized me/remembered my freakishly tall stature. I asked her if what I saw was correct. She assured me it was. “Is it a half bottle?” She assured me it was not, and I returned to the table as the server was there to take the meal order. As client after client voiced their preferences, I stared at the listed wine at the top of the second page of the list:

My eyes then drifted right, to the price:

To see a 30-year-old wine on a list in France is not all that rare, but in a tiny town not known for tourism or much of anything else? Yes, I was intrigued and tried not to be giddy. The wine, from one of the biggest negotiants in Burgundy, comes from one of the top vineyards for Chardonnay in the world. New releases of the wine usually go for at least twice that price, and this one was 30 years old.

Sure, it represented about 1/5 of my “pay” for the two weeks, but I do not lead bike trips in Europe for the remuneration—I do it for the experiences, for the elation of riding my bike in a country I love, to experience joie de vivre.

And there would hopefully be a lot of joie to vivre in that 750 ml.

Before I ordered the bottle, I asked our server if I would be required to pay for the bottle if it were bad—there is considerable risk when buying an older bottle, particularly a white, and Burgundy is no exception. Many white Burgs can oxidize prematurely, rendering the wine undrinkable (but that seems to affect only wines produced since 1996, for some unknown reason).

Her response was blunt but courteous and accompanied by a subtle shoulder shrug: “Oui, désolée.”

It took me precisely two seconds of contemplation to order the bottle.

The owner brought out the wine in an ice bucket and started to open the bottle. I stopped her. If I was going to be on the hook for the cost regardless, I was going to be the one who opened the darned thing. I asked if she had an “Ah-so” opener. No luck. All she had was her flimsy waiter’s corkscrew that she probably got for free.

As I was trying to free the cork from its nearly three decades of captivity, everyone in the kitchen suddenly showed up to watch—it was their last bottle of the wine, and they were there as if to see it off, to celebrate its drinking.

As expected, the cork was not in great shape.

I managed eventually to remove the cork, albeit in two pieces, and immediately offered the owner a glass—I figured since it had been in their possession for so long, she was dying to know how it was. She graciously accepted, but stopped me after I’d poured only an ounce or two. I watched as she passed it around to the staff, each first smelling, then taking the slightest of sips. They were ecstatic, which only added to the joy of the wine, and I had not even so much as smelled it yet.

1988 Louis Latour Bienvenues Bâtard-Montrachet: Retail 300€? As soon as I saw this on the list for 122€. It called to me. Screamed to me. Whom am I kidding? It accosted me. A deep slight color suggested some oxidation, but oh my god the nose. Coffee. Carameled pineapple. Or is it yellow apple? Deep and amazing, this is a wine that I first thought could change a life, but holy cow this could alter history. How do you describe a wine that you yearn for, you dream about, you read about, you lust after and it delivers on every aspect? That’s just it–you can’t. As I type this, tears are starting to form and my mind is becoming cloudy. The palate is certainly oxidized and at first odd, but then you realize that you’re drinking magic: caramel, hints of citrus, a decided sherried note. The finish might be the longest, most intense white Burg I can remember. Intense flavors, lasting acidity. Whoa. While certainly not a “perfect” wine, this is certainly as close as I have tasted in a while. Outstanding Plus. 97-99 Points.

I am not sure if the others in the group realized how good the wine was—I know my thoughts are high up on the list of wine geekiness—as the slight oxidation is a bit of an acquired taste. But I left the dining room that night, I caught the owner’s eye, and we simultaneously smiled and nodded at one another. She knew. 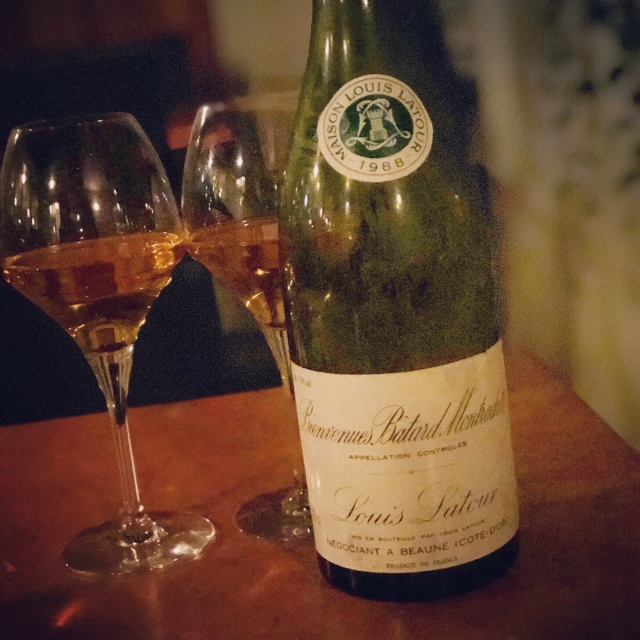 I have been an occasional cycling tour guide in Europe for the past 20 years, visiting most of the wine regions of France. Through this "job" I developed a love for wine and the stories that often accompany the pulling of a cork. I live in Houston with my lovely wife and two wonderful sons.
View all posts by the drunken cyclist →
This entry was posted in Burgundy, Chardonnay, Wine. Bookmark the permalink.

6 Responses to An Unbelievable Find in Montbard