I started this blog in 2012 as a creative outlet where I could write about a few of my passions. Initially, I thought that I would write equally about wine and cycling and those areas where the two intersect (hence the “Drunken Cyclist” moniker–more on that below). 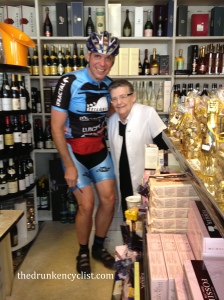 With Mme. Salvatore at her incredible champagne shop in Epernay, France (she’s the one in white).

Not too far along my focus became almost exclusively on wine for one simple reason: I found the more compelling stories involved wine–from the vineyard, to the tasting room, to the table. Just about every time there is wine in a glass, there is a story to be told.

And I am a story-teller.

While I take my writing seriously, I try not to take myself all that seriously. My goal, above all else, is to make people smile by chipping a bit of the mystique off of wine, since at its base it is a beverage that is intended to bring joy to those who consume it.

I have been an avid consumer of wine all my adult life, first being introduced to it while studying in Strasbourg, France. After graduating from college, I began my career in education as a high school teacher of French, math, and history. During the summer, I would relocate to France, spending the warmer months as a cycling tour guide through most of the country’s wine regions: the Loire Valley, Burgundy, Provence, Alsace, Bordeaux, the Dordogne, the Jura, and Champagne. 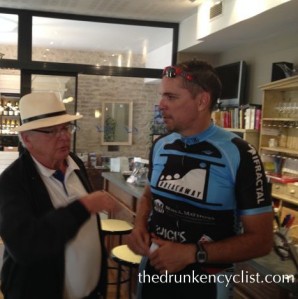 With Olivier Leflaive in Puligny-Montrachet–I could listen to his stories for hours while sharing a bottle or two. I also love his hat.

Those trips were a lot of fun, of course, but they also taught me that there is a lot more to wine than what you find in the bottle. There is history, culture, tradition, and above all else, people with great stories to tell.

I still lead an occasional tour in Europe, but also find the time to visit the many great wine regions in the U.S. I have visited most of the wine regions in California numerous times, often by bike, and have ventured into Oregon, Washington, and New York, always in search of great wine, and a compelling tale.

*As for the name of this blog. I do not in any way mean to suggest that anyone should ride a bike inebriated (and yes, I get asked that all the time), but calling the blog “The Guy Who Rides a Bike Hard in the Morning So He Can Enjoy a Nice Bottle of Wine With Dinner and Not Feel Guilty About It” was a bit cumbersome as a title. I have thought about changing it several times, but I have been counseled against it–once you have made a bit of a “name” for yourself, you really can’t then go and change that name.