Posted on August 1, 2013 by the drunken cyclist

It is the end of another month and thus time for another installment of the Ohmygod saga (the previous installments: Part One, Part Two, Part Three, Part Four, Part Five, and Part Five ‘B’, Part Six, Part Seven, Part Eight, Part Nine, Part Ten, Part Eleven–or you can check them out in the menu up top). As you will recall, I used to be a cycling tour guide in Europe for several years. Through that job (yes, it is a bit difficult to call it a ‘job’) I met countless interesting people and have a few compelling stories to tell, but most of them pale to the story of Ohmygod, one of the clients that I had for two weeks. Some may wonder about the moniker, but the name chose itself really; it is what I uttered repeatedly during just about every interaction with him.

In the previous installment (Part Eleven), we left the town of Chenonceaux and headed for Tours, a larger city in the Loire region. On the way, while I was eating lunch in Amboise, I saw Ohmygod zoom by and perform a rather remarkable cycling feat….

I sat back down and finished my lunch while pedestrians continued to shuffle by. Several of them who obviously witnessed the episode were still shaking their heads in astonishment. There was even one teenage girl trying to recreate the entire event for her younger brother (who had apparently missed the spectacle), complete with sound effects. The boy seemed enthralled by his sibling’s enthusiastic retelling but also disappointed for not being an eyewitness himself.

I paid the check and hopped back on my bike, there was still another 25-30k of riding, plus stops for a wine tasting or two in Vouvray. As I got to the bottom of the hill and crossed the Loire river, I stopped for a second as I always do when leaving a town to take it all in. Leaving Amboise, I wonder how different the view must now be as compared to when Leonardo da Vinci undoubtedly stood where I now was and I determine that likely little has changed. I also wonder if this will be the last time that I visit the town–one of the towns that I studied way back when in the ninth grade. 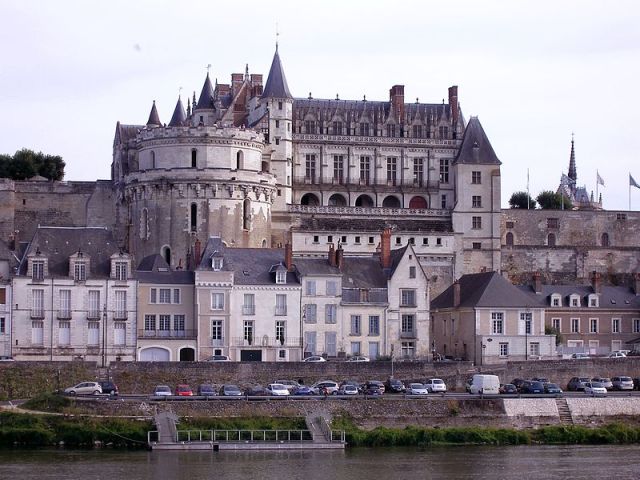 I do not often get all that melancholic on rides, but for some reason, the Loire causes me to reflect more than other areas of France. At some point, I should examine….

All of a sudden, I came crashing back to reality.

I find myself on my side with my overloaded bike weighing down on my left leg, which is pinned underneath. For a moment I remain rather dazed, not entirely sure what just happened. I look down at my bike and notice that my front wheel is horribly out of place, since it is resting in the middle of my frame, but at the same time spinning. Eventually, I realize that my bike is indeed still intact and the other wheel is that of another bike–one that clearly just struck me, knocking me to the ground. As I prepare to look over my right shoulder to confront the perpetrator, I have at the ready several choice French curse words that I learned during the year that I played basketball in the country.

I should have known.

There he was, his long gray hair matted to his face, staring at me as if he had never seen me before in his life, with a rather large gaping hole in his biking shorts.

The first thing to enter my mind?

“Great, there goes half his wardrobe.”

Ohmygod was up rather quickly and it seemed obvious that he had been through this routine many times before. After he extricated his bike from mine, I untangled my legs, hoisted my bike off of me, and stood up.

I turned to him to seek an apology or at least an explanation, but he was no longer there. I scanned the immediate area: no sign of him. It had only taken me a few seconds to get up once he removed his bike from the top of mine, but evidently that was enough time for him to vanish into thin air. After performing a more careful surveillance of the environs, with still no trace of Ohmygod, I made a quick assessment of the damage: other than some minor scrapes and my handlebars being slightly askew, there were no serious issues with body or bike.

Nonetheless, I stood there for quite some time, not entirely sure what my next move should be. My “job” as the guide was actually to make sure that all the clients were ahead of me so that in case there was some sort of problem, I would eventually happen upon them and theoretically provide some sort of assistance. If I were ever to happen upon any of the clients riding along the route, I needed to stay with them—maintaining my position as no further along than the last of the group.

My initial thought was to hop on my bike and ride like hell so as to get ahead of Ohmygod and avoid any possibility of having to ride the next 25 kilometers with him, but there was that stupid sense of responsibility that I could not get out of my head. There was a small chance that he was actually ahead of me on the route, since the next turn that needed to be negotiated was a mere 100 meters away, along a rather narrow, unmarked street. After making that turn, he would have been immediately out of sight, but I highly doubted that this is what had just transpired since he had been heading in the wrong direction (back toward Amboise) when he t-boned me. He also had voiced his disdain numerous times for the directions provided by the company, preferring instead to follow the local road signs (which certainly had caused him to ride on the highway from time to time).

I stood there for a good five minutes, looking and feeling like a complete moron trying to decide what to do. I am not sure if I was waiting for some sort of divine intervention to elucidate my next move, or if I was still a little groggy from the impact. I glanced down at my watch and realized that it was a quickly approaching 3:00. I had told Grumpy and Mr. Personality that I would be at the Cave des Producteurs (a wine co-operative) in Vouvray by 4:00, so I needed to get moving. I decided to ride the route at a pretty good clip and if I came across Ohmygod, I would use the rendezvous in Vouvray as an excuse to pick up the pace, leave him behind, and not be forced to ride with him.

I motored along at a pretty good clip, convinced that I was ahead of Ohmygod and thankful that was the case–I was riding into the wind and if he had been up the road, I was sure I would have smelled him.

I made pretty good time and pulled into Vouvray well before 4:00. I turned up to go to the Cave des Producteurs, where I saw Grumpy and Mr. Personality were waiting outside for me. While I was locking up my bike, Grumpy told me that they had just pulled up a few moments before, so I did not feel too guilty. As we walked up to the entrance, I thought I saw a bike zoom through town up the road and I could have sworn it was Ohmygod. I debated asking my two companions whether they just saw him, but I decided that it could not have been him–if it was, he would have ridden from Amboise in roughly the same amount of time as I did.

That would have been tough to admit.

So it wasn’t him. 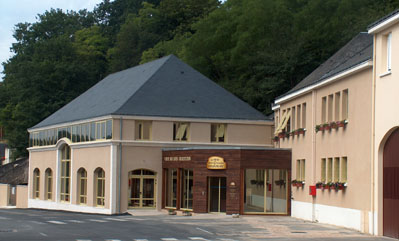 We made our way into the tasting room and up to the counter. The best Chenin Blanc in the world is made in Vouvray and the Cave des Producteurs puts out a solid, reasonably priced product. We started with their sparkling wines and then progressed to the still wines. After we had a few glasses in our rear view mirror, I began to contemplate if I should confide in Grumpy and Mr. Personality what I found in Ohmygod’s room earlier that morning. Just thinking about seeing that empty condom wrapper on his hotel room floor sent a shiver down my spine and unpleasant images racing through my mind. It is rarely a good idea to talk about a client with other clients on the trip, but I needed some assistance processing this one.

After moving on to the Demi-Secs (half-sweet) and the Moelleux (sweet) wines, I decided to take the plunge and get it off my chest.

Instead, I went the in-another-life-I-would-have-been-a-private-investigator route:

“So, how did things go in the bar last night after I left?”

Grumpy replied, becoming increasingly animated: “It was pretty calm until this woman started hitting on Ohmygod. We were both convinced it was a joke, but we were stunned when they left the bar together.”

At that point I think all the color must have drained from my face and my chin must have dropped down in between my knees. I could not believe what I just heard. Grumpy continued to talk, but I did not hear a word–all that I had learned in my life, everything I had believed, each of the people I had dated–I began to question it all.

I was on the ropes. And it did not feel good.

I glanced over at Mr. Personality and he was desperately trying to repress a snigger.

I was finally able to tune back in to Grumpy: “… and so we followed them out of the bar and on the way back to the hotel, they were arm in arm and then Ohmygod reached down and started grabbing her b…”

It soon became clear that this was not an uncomfortable laugh or even a laugh of incredulity. They were laughing.

I just love that.

After catching his breath, Mr. Personality explained: “We planted the wrapper in the room–we knew you did a once trough of the rooms in the morning, so we thought we would mess with you.”

Grumpy: “To see if your head would turn all the way around.”

Have I mentioned that Grumpy (like Ohmygod) is Canadian?

Have I mentioned that I hate Canadians?

I have been an occasional cycling tour guide in Europe for the past 20 years, visiting most of the wine regions of France. Through this "job" I developed a love for wine and the stories that often accompany the pulling of a cork. I live in Houston with my lovely wife and two wonderful sons.
View all posts by the drunken cyclist →
This entry was posted in Chenin Blanc, Humor, Loire Valley; Vouvray, Ohmygod, Travel, Wine. Bookmark the permalink.

33 Responses to Ohmygod–Part 12 A Mystery Solved