It is the end of another month and thus time for another installment of the Ohmygod saga (the previous installments: Part One, Part Two, Part Three, Part Four, Part Five, and Part Five ‘B’, Part Six, Part Seven, Part Eight, Part Nine–or you can check them out in the menu up top). As you will recall, I used to be a cycling tour guide in Europe for several years. Through that job (yes, it is a bit difficult to call it a ‘job’) I met countless interesting people and have a few compelling stories to tell, but most of them pale to the story of Ohmygod, one of the clients that I had for two weeks. Some may wonder about the moniker, but the name chose itself really; it is what I uttered repeatedly during just about every interaction with him.

In the previous installment, we were in Chenonceaux, finished dinner, and headed over to the Son et Lumière show at the famous castle right around the corner.

After the Son et Lumière show, we headed out of the castle grounds and around the corner to the hotel. I quickly polled my trio and the consensus was to have a drink or two. There was only one bar in town and it usually only stayed open as long as there were enough patrons to justify it.

In the U.S., if there were an event like the Son et Lumière, which brought several hundred people into town, the bars would all be open, likely selling beer at a makeshift counter on the street. In France, this seems to be rarely the case—in many such situations I have found businesses often close early, in order to avoid the crowd and get home at a reasonable hour. I am far from a hardened capitalist, but I am convinced that the French are generally averse to making money. Given the recent series of events at dinner and the history of taking Ohmygod to bars, I was not so secretly hoping that the bar would be closed; I was certainly in support of finding a shuttered bar, championing French determination to snub their noses at “American Greed”.

Yet again, however, my weeks of using up all my good karma were coming back to taunt me—the bar was open.

We sauntered in and as soon as we sat down, Ohmygod informed me that he did not want to drink any more wine and he was going to go back to drinking beer. I suppressed the desire to inform him that he had just been drinking beer with his compatriots and that the only wine I had seen him drink at all was the few drops that remained in the bottle after the spectacle at dinner. In the interest of replenishing my karma, however, I decided to refrain. I figured that he had been in training for years and he had no doubt developed considerable muscle memory, thus hoping to avoid any type of catastrophe associated with his lack of coordination. There were countless other ways that he could make my evening even worse; I was just hoping to (even slightly) reduce the odds.

The evening at the bar was relatively harmless, surprisingly. Sure, Ohmygod needed the server to repeat the beers available four times again (there were only two) and he berated first the server, then the bartender for the fact that there were no free bar snacks available. He began to protest that it was in violation of the Geneva Convention, but I said if he would be quiet and return to his seat, I would buy him another beer. He quickly acquiesced and returned to our table, but the devilish grin he was sporting either indicated that I had just been had or he was quite satisfied with passing gas at that exact moment. 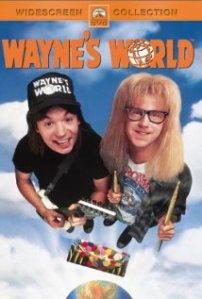 At the table, Mr. Personality decided he wanted to get to know Ohmygod a little better. After Mr. Personality bought him yet another beer (at least his fourth beer in the previous hour), Ohmygod began to open up. Here is what we discovered: He works at a Public Access TV station about 20 miles (30k) outside of Toronto as an Assistant Technician, a job he has had for the last 7 years (which brought to mind a certain film). Prior to his job, he was a student at a Community College (also outside of Toronto) where he studied Film and Television Production.

He finally left after his mother convinced him that the instructors in his program were idiots and they were just keeping him there in order to take all his money. Speaking of his mother, he had lived with her all his life. When Grumpy asked if he ever considered moving out, Ohmygod seemed confused and a little agitated—clearly the thought had never entered his mind.

The conversation then shifted to his love life.

As much as I have to admit I was curious, I really feared what he would say next. I took the opportunity to excuse myself and return to the hotel. On the short walk just across the street, I contemplated the wisdom of my decision; I had convinced myself that my presence was needed at all times in order to help avoid or at least mitigate the inevitable social disaster. As I slipped the key into the door, however, I decided that I would try and let go. Yes, he was technically my responsibility, but I also needed to tend to my own relative sanity.

Besides, how bad could it be?

Yes, I actually thought that.

The next day, I made my way down to breakfast a bit on the late side for a couple of reasons. First, I really did not want to run into the clients for fear of learning what may have transpired after I left the bar. Earlier, at dinner, I had supplied them with the route sheet (essentially directions on how to get from point A to point B) as well as a verbal layout of the day’s ride, including the highlights and possible lunch stop, to prepare them for the day (Ohmygod no doubt lost the route sheet, but he never read them anyway [“They slow me down”] so I refused to feel guilty).

OK I lied. That was really the only reason to come down to breakfast at the last minute.

None of my three amigos had signed up for the single room supplement, which normally meant that they would rotate: One would be in a single the first stop, while the other two shared a double. The next stop, one of the duo would get the single and so on. After the first two nights in Blois, Mr. Personality and Grumpy both agreed to share a room the rest of the trip, giving the single to Ohmygod for the remainder.

If you need that explained, you really need to start reading this whole story from the beginning.

As was now standard procedure, I would swing by Ohmygod’s room once he left to assess the damage. This time, since it had only been one night, there was far less carnage. There was his abandoned route sheet (anticipated), several empty cans of beer (no surprise), one of his cycling jerseys that had a noticeable stain in his rear pocket (no doubt from a three day old croissant), and an empty condom wrapper. 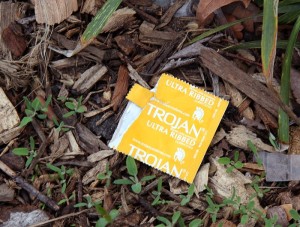 I had no idea what to do.

I was shocked. Appalled. Amazed. Disgusted. And maybe a little proud. OK, not proud. Intrigued? Similar to the way that Jane Goodall observed her primates.

I tried really hard to un-see what I had just seen. Really hard. I focused on determining what else might be an issue with the room. It was no use. That little yellow packet with the torn, but still attached top half, was staring me down like an assassin. I had but one choice.

I got the heck out of there.

As I walked down the hallway, I had not one but three shivers slicing through my spine. I started going through all the possible reasons. There is no way that it was there from the previous occupant. Perhaps it had somehow become stuck to the bottom of his shoe? I was grasping at straws, determined not to rely on Occam’s Razor.

At least the town of Vouvray was along the route—I would be stopping for a wine tasting. 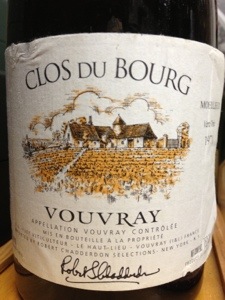 I have been an occasional cycling tour guide in Europe for the past 20 years, visiting most of the wine regions of France. Through this "job" I developed a love for wine and the stories that often accompany the pulling of a cork. I live in Houston with my lovely wife and two wonderful sons.
View all posts by the drunken cyclist →
This entry was posted in Humor, Ohmygod, Travel, Vouvray, Wine. Bookmark the permalink.