The other day, one of my vinophiles was asking me about her wine storage. She was worried that she would not be able to keep a wine for more than a day or two. After a few questions, I learned that the basis of her concern was the fact that she did not have a “real” wine refrigerator. As a result, she “only” could keep her wine in the basement, under the stairs. This was the reason that she was not able to keep any wine in the house—she would drink it as soon as she got it for fear that it would go bad without proper storage.

At that point, right then and there, I decided to go on a little “mini-rant”. Throughout my decade or more of serious (my wife says obsessive) wine buying, I read and hear often that wine needs to be stored on its side, free from light and vibration and at a constant 55-59 degrees. I can certainly agree with the bulk of that statement. If you are going to keep your wine for more than a few months, keeping the wine on its side will keep the cork moist and therefore retain the seal, keeping air out of the wine. Air is generally good when drinking wine, not good when storing wine.

Extended exposure to light is also not a particularly good thing when you are trying to keep the bottle around for more than the average amount of time a bottle is aged in this country (that would be roughly three hours for those of you wondering–the vast majority of wine is purchased for immediate consumption). This does not mean that if the bottle is purchased during daylight hours that you have to stuff it under your shirt to get it from the car to the house. It does mean, however, that you should likely avoid wine shops that like to display bottles in their store front window despite the six hours of afternoon sun (yet another reason you should not buy wine from the Pennsylvania Liquor Control Board–the state owned wine monopoly).

In most contexts in life, extended vibration is not a good thing either. This means that the ever so popular storage space of right on top of the refrigerator is not such a great idea. Those energy sucking behemoths vibrate constantly (and generate quite a bit of heat while trying to keep your veggies cold) which unsettles the wine, placing it in a permanent state of bottle shock.

It is the last part of that directive (at a constant 55-59 degrees) with which I take umbrage. Certainly, given the choice of storing wine at a constant 55 degrees or not, all other things being equal, I would store the wine at the constant temperature. The key here is not “55 degrees” but rather “constant”. The real enemy of wine storage is rapid fluctuations in temperature, not any cellar that happens to creep up over 60. I am not suggesting that wine can be stored at high temps as long as they remain constant–but as long as the temperature is kept around 70ish, there really is very little to worry about here.

I have what is known as a “passive” cellar. I tell people that and it sounds rather impressive and well thought out. All it means is that I do not have the wine in a temperature and humidity controlled environment. Basically, it means I am a cheap bastard. For a while I thought about building a legitimate cellar in my basement, but it was going to set me back several thousand bucks, which could (and did) buy a lot of wine instead.

So I read a bunch and talked to a few people that I respect and the there was a rather strong consensus that a passive cellar that avoids dramatic heats spikes is more than sufficient. Then why all of this insistence on 55 degrees?

The cynic in me is convinced that it is yet another money grab–there is a rather huge industry in wine storage and they all want you to think that keeping the wine at 55 degrees is the single most important factor after you purchase a bottle. 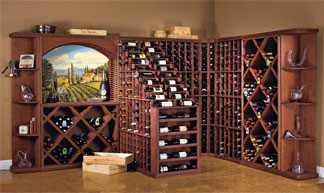 This is not my cellar. (From Wine Enthusiast)

Of course they want you to believe that–it will make you run out and buy a wine fridge or build a controlled cellar. That means money for them. 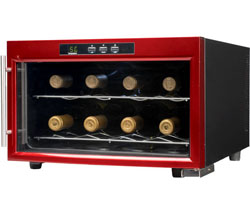 Nothing says “waste” like a wine fridge for eight bottles.

Certainly, if you are buying wine as an investment (which is not really a good idea, but hey, it’s your cash), you will need to keep it in a controlled environment since the stooge that eventually buys it (hopefully) from you will want to know about the storage conditions. Also, if you are planning to store the wine for a couple of decades, it probably is a good idea to get some sort of “legitimate” cellar. But really, I am just hedging my bets on that last statement since I don’t necessarily believe it. Winos in Europe laugh at all the money we Americans spend on keeping wine at 55 degrees. They have been storing wine in their cellars for centuries without any fancy refrigeration and those wines continue to hold up very well in passive cellars.

There are no doubt many out there that will think what I am saying is blasphemous or downright moronic. That I am somehow going against the predominant paradigm.

That’s OK, I can handle the heat.

I have been an occasional cycling tour guide in Europe for the past 20 years, visiting most of the wine regions of France. Through this "job" I developed a love for wine and the stories that often accompany the pulling of a cork. I live in Houston with my lovely wife and two wonderful sons.
View all posts by the drunken cyclist →
This entry was posted in Rant, Wine and tagged constant temperature, pennsylvania liquor control, Wine Cellar, wine fridge, wine monopoly, wine preservation, wine refrigerator, wine storage. Bookmark the permalink.