Last month, we started the Monthly Wine Writing Challenge (#MWWC1), which was won by the Armchair Sommelier. This month, she therefore has the  honor of hosting the Challenge and choosing the new theme. Her choice, “Trouble” first gave me some pause, but like Talk-a-Vino, when I mentioned it to my wife, she gave me the stink-eye, laughed, and said “Oh, I am sure you can come up with something.”

Even though the rules state that the post should be under 1000 words, I have not been one for following rules much. Thus, here is part two of my entry, in case you missed it, part one can be read HERE.

The plan was to hit Wine Library first and then drive the couple miles to East Orange. I spent a bit of time at the wine shop since there is nothing even close to it in Philly and they had a very nice selection of champagnes–so I bought a few bottles (hopefully the wife would not realize it).

I jumped back into the Prius and made my way to East Orange with more than just a little trepidation. The plan was simple–if the house looked too sketchy, I would just keep driving and head home.

On the way, I got a call from Ernesto and he let me know that he would not be able to meet me since he had some “buisness” to attend to. I was not to worry, though, since his wife was home and she would complete the transaction. Call me an idiot, but this actually made me feel better about the whole situation since there was at least one person in the world who placed some amount of trust in Ernesto. In my mind, this made him “trust-worthy.”

When I arrived in East Orange, I was surprised–it actually seemed like a cute little town–there were nice little bungalos and people outside working on their gardens. In fact, there were a lot of people out–sitting on their porch, washing their cars….

It was Friday–do any of these people have jobs?

I kept driving and I was actually feeling pretty good about the situation–growing up, I had found myself in much worse neighborhoods in Detroit and I survived, so this was going to be a breeze..

I found the street and pulled up to the house. The house. How should I put this? The house was clearly the absolute worst looking house that I had seen in the town. Where to start? Well, there was a one ton truck in the front yard, with a small tree growing out of where the engine should have been.

There was no grass to speak of, but there were plenty of weeds, at least I assume they were weeds, and they were all at least waist high. The front door was at least three different colors. I guess it could have been more if the door were intact–the lower right hand corner of the door–from just below the handle–was missing. If I had to guess, it appeared as though it had been chewed through, but that is just a guess.

So what did I do? I parked the Prius. I am not sure why I did not just keep driving as I had promised my wife.

I am pretty much an idiot.

As I started to walk up to the house, I noticed a few more things. First, the house was surrounded by a chain link fence and the gate was closed not with a latch, but with a coat hanger. Second, on the walkway just beyond the gate that leads up to the house, there were dozens (and that is not an exaggeration) of piles of….

That leads to the third thing: the dogs. By the time that I stepped out of the car, two very large pitbulls (and about six smaller pitbulls) had been going completely apeshit (no pun intended): running around, trying to jump over (or through) the fence in order to rip into my nice pale flesh.

After a moment of contemplating my existence on this earth, I heard a woman’s voice from behind the door. She had not opened the door, but since the door was only partially there, communication was easily facilitated.

“Are you Jeff?” she screamed.

For a second, I had no idea what to say. Was it not obvious? What other 6’4″ white guy, wearing a red polo shirt, corduroy shorts, Birkenstocks, and driving a red Prius might she be expecting that day? I considered saying I was a Jehova Witness, which is really the only other plausible explanation, but I refrained.

She then proceeded to unlock what sounded like twelve deadbolts even though it was clear that even someone my size would have no trouble gaining entry to the house through the gaping hole in the door. Eventually she emerged and started yelling at the dogs to shut up (it was actually much more graphic than that, but I have used one “colorful” word already…). She deftly avoided the huge mounds of dog feces on the walk (clearly she had done that before), parted the sea of dogs and came over to un-coat hanger the gate.

So I followed her.

What is worse than an “idiot?”

All of a sudden, the dogs were my best friends: jumping up on me, running around and through my legs, licking me constantly (although that could have been just them getting a little taste of their eventual meal…).

Avoiding the crap mines was a little more difficult since I have rather large feet and the dogs were not making it easy to walk where I pleased. I made it to the steps leading up to the door without apparently soiling my Birks and I noticed that two of the five steps were missing. Gone. This required essentially leaping from one step to the next to avoid the chasm in between. The steps that remained seemed as if they could go any moment as well, so with each step, a different year in my life passed before my eyes.

I really need a word that surpasses “idiot.”

We walked in the door and there was a bit of a breezeway–it was not quite a room, nor was it a porch, but it was a covered area that ran the length of the front of the house, and was only five feet deep. Latisha asked me to wait there and she would go get the wine.

As I stood there, I took out my phone and dialed “9-1” I then put the phone back in my pocket with my finger on the “1”. If I was going to go down, at least I was going to get one more call in. The way the house looked, there was no doubt that the authorities had already mapped out the quickest way to get there.

I looked to my right.

There was mounds and mounds of crap (not the dog variety): shoes, clothes, paper, food wrappers.

I looked to my left.

There was a huge engine (which I assume either came from or was intended for the large truck in the front “yard”) right there in the house.  I am not sure how they got it in there since there was no way it could go through the door (even if the door were open).

Then I peered through the next door that led to the rest of the house. There was even more crap–way more than what was “stored” in this little breezeway section. It was incredible. I saw a shoe under a mound of other clothes and such and I actually thought there might be a foot still in it (but no way to know if the foot were still attached to its owner).

Just then Latisha returned with a shoe box. In it were five bottles of wine.

In a shoe box.

Actually, it was even a bit smaller than a shoe box.

She then started pulling the bottles out one by one, holding them by the neck, and turning them rather violently to read the label. (Imagine the motion of an agitated customer in line at a dry cleaners, quickly motioning to look at his watch every two seconds. Now put a wine bottle in his hand. Bingo.)

She then would hand me the bottle and I would utter a little mini-apology to the wine–saying that they were safe now and everything was going to be alright.

After she handed me the last bottle (which were all huddled behind me as if they were toddlers afraid of a stranger), I counted the $200. (This was a completely moronic move since I had exactly $200 on me–not a penny more–if I was going down, they would not get anything else–kind of made me feel a bit like a gangster in my corduroy shorts.)

After I gave her the money, I gathered up the orphans and started back to the mine field.

I figured this was it, the gig was up. I waited to hear the sound of a gun being drawn (I have no idea what that sounds like, but I was trying to not pee my corduroy, gangster shorts.)

I slowly turned back toward her and she reached into her purse.

I figured it was too late to find religion, so I might as well face it. This is what I get for being a complete idiot (I really need a better word).

She pulled her hand out of the purse.

Pointed her fist toward my face.

Handed me a business card.

“I am a real estate agent here in East Orange. Give me a call if you need someone. You never know!”

I smiled (I think), turned, hopped over the missing steps, played hopscotch through the dog crap, petted one of the dogs (idiot), threw open the coat hanger and made a B-line for the Prius. I carefully placed the bottles in the styrofoam shipper and sped off (well I did not really “speed” since that would have ruined the gas mileage.)

I made it back home, unscathed and I recounted the story to my wife.

“Imbecile” was all she said. 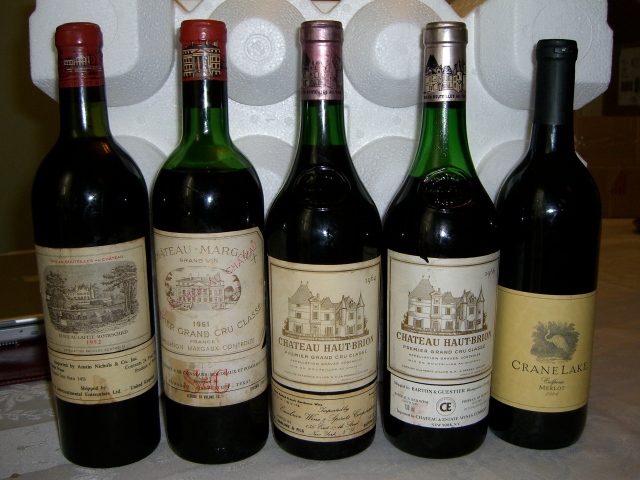 I have been an occasional cycling tour guide in Europe for the past 20 years, visiting most of the wine regions of France. Through this "job" I developed a love for wine and the stories that often accompany the pulling of a cork. I live in Houston with my lovely wife and two wonderful sons.
View all posts by the drunken cyclist →
This entry was posted in Bordeaux, Cabernet Sauvignon, Humor, Merlot, Wine. Bookmark the permalink.