Tales From Sonoma: Anthill Farms Winery and What if?

Posted on December 8, 2014 by the drunken cyclist

This is my entry in the Monthly Wine Writing Challenge (#MWWC13).

I guess like many a wine blogger, back in the recesses of my tormented mind, there is a desire to become a winemaker. After spending the majority of my adult life drinking wine just about every night and spending most vacations in or near wine regions, I can’t help but think “what if?”

What if, when I had lived in California (and was still relatively young) I had quit my job and moved just a few miles north to wine country and found a job in the wine industry?

What if instead of moving back East to be with my now wife, I had convinced her to move back to the West Coast?

Then I start thinking about it more and I realize (or rationalize) that I am an East Coaster at heart—I love the grit, the attitude, the history that surrounds us every day. Besides, I further rationalize, I know next to nothing about making wine and it would take years of grunt work, not to mention going back to school, to gain the experience and knowledge that it would take to become a viable “winemaker”.

Every once in a while, though, those “what if” questions pop back into my head, and it takes me a while to suppress them once again.

One such instance occurred on my last trip out to Sonoma. I was planning another visit to Dry Creek Valley, and I realized that there was a bit of a hole in my schedule, so I thought I would try to squeeze in another tasting or two. As I was researching to find another potential spot, I came across Anthill Farms Winery. 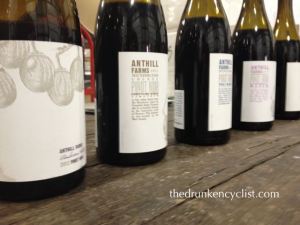 I first tasted Anthill wines back in February at the In Pursuit of Balance trade tasting in New York City this past February, and had made a note to try to visit them at some point in California. The address on their website indicated that they were not only on Dry Creek Road, but after a quick Google search, I discovered that they had the same address as the Family Wineries Cooperative Tasting room—a place I had been to several times and passed countless more. There are several other wineries in the cul-de-sac, many of which I have visited at one time or another: Papapietro Perry, Peterson, and of course Kokomo Winery.

But I had never noticed Anthill Farms in that neck of the woods.

Nonetheless, realizing that my taste buds could use a little Pinot break, I contacted Web Marquez, one of the owners of Anthill to set-up a tasting. My taster-in-crime, Loie of Cheap Wine Curious, joined me and after a few minutes of searching, we found the nondescript building that housed Anthill.

Web welcomed us in and gave us a brief recap of the Anthill story:

Three people comprise the entirety of Anthill Farms, and they come from three different parts of the country: Web (Virginia), Anthony Filliberti (Sonoma) and Dave Lowe (Kansas). They met by serendipity as twenty somethings back in 2003 when they independently landed jobs as cellar rats at one of the pinnacles of Pacific Pinot, Williams Seylem. After their first crush had finished, they took a road trip together to Oregon, driving up the coast to visit wineries in the Willamette Valley. 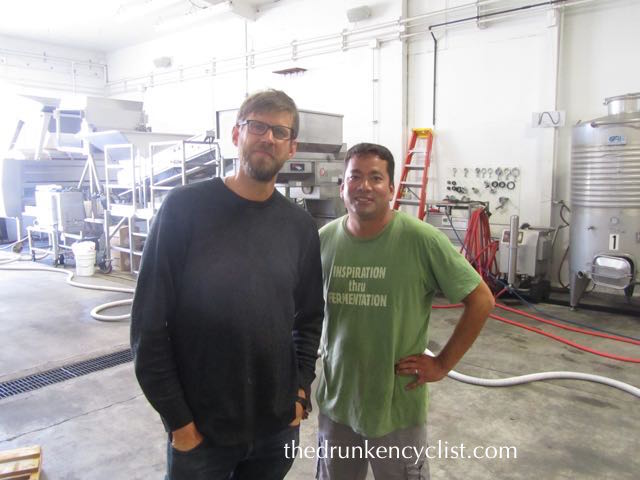 Along the long drive, they had plenty of time to talk and contemplate their futures in the wine industry. On the way back to Sonoma, encouraged by the small-scale of some of the Oregon winemakers that they visited, they sketched out a plan to start making their own wine despite not having much capital to invest (even eleven years ago, the $9,000 they initially invested was a paltry sum), nor really any technical winemaking background.

They started (and remain) small, purchasing their fruit from all over Sonoma and Mendocino Counties, making their wine at the Papapietro Perry facility. Eleven years after that road trip to Oregon, the three are still together, which I found amazing, particularly in an industry where there is frequent movement from one winery to another. Web, although he has surely heard that before, shrugged it off—they have a bit of a formula to make their wines that they have essentially applied since the beginning, and thus, there is really no reason to disagree. 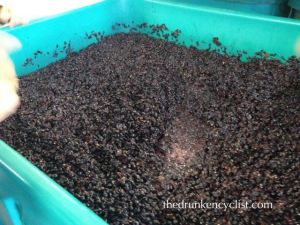 After the hour or so tasting, we headed over to the Papapietro Perry building where Anthill makes their wines and peeked in one of the fermenters from the recently completed harvest.

As we started tasting through some of Anthill’s wines, I was again surprised—this time at Web’s take on Pinot Noir. For years, I have read and heard that Pinot is the most finicky of grapes—that it is hard to grow and gives winemakers fits. Not so, according to Web. Even though they do not own their own vineyards, they have considerable input as to how the vineyards where they source their fruit is managed. Web stressed that Pinot really not that hard to grow—but it can be difficult to get vine and fruit in balance to make interesting wine. Their approach is fairly straightforward: treat Pinot essentially like a white grape and do everything to limit oxidation during the winemaking process.

In all, Anthill produces six vineyard designate wines, three from Sonoma and three from Mendocino County, all priced at $46. There are two regional wines, both $34, and, depending on the vintage, one or two Syrahs.

2012 Anthill Farms Pinot Noir Tina Marie Vineyard: Retail $46. From the Green Valley area of the Russian River Valley appellation. A funkier nose with bigger fruit—by a lot. A bit of pomegranate on the palate with a long finish. Outstanding. 90-92 Points, maybe more.

2013 Anthill Farms Pinot Noir Campbell Ranch Vineyard: Retail $46. Meatier fruit, but very tight, as it was just bottled a week ago and not yet released. Once the fruit mellows a bit this will be fantastic. Outstanding. 92-94 Points.

2012 Anthill Farms Syrah Peters Vineyard: Retail $34. Considerably darker, as one might expect. Another funky nose, but rich fruit and balanced. This is the type of Syrah I really like. Outstanding. 91-93 Points.

After the tasting, as we drove away, I started to wonder ”What if” again. Is it possible that I had been a mere stroke of serendipity away from being knee-deep in winemaking? I envisioned a life on the West Coast, living in wine country, making wine, and riding my bike up and down the coast all year long. That thought stayed with me for a while until we came to a stop sign and a car pulled out in front of us, violating basic stop sign etiquette.

Instinctively, I laid on the horn, and I was back in East Coast mode—I likely would have had a few choice words for the driver had I been alone.

I then realized that I certainly made the right choice, but I know the ”what if?” will be back, on my next trip to wine country.

I have been an occasional cycling tour guide in Europe for the past 20 years, visiting most of the wine regions of France. Through this "job" I developed a love for wine and the stories that often accompany the pulling of a cork. I live in Houston with my lovely wife and two wonderful sons.
View all posts by the drunken cyclist →
This entry was posted in Pinot Noir, Syrah, Tasting Notes, Wine, Winery Visit. Bookmark the permalink.

12 Responses to Tales From Sonoma: Anthill Farms Winery and What if?