Posted on September 24, 2015 by the drunken cyclist

Brace yourself. I am about to make a bold statement:

Yeah, I know, it blows your hair back a bit.

As I have written countless times on this blog, my first real love in wine was and is champagne, but the bubbles only account for about 10% of my cellar (I am only counting champagne here, not other sparklers). After I got my nose tickled in Champers, it was not much of a stretch to move on to Pinot Noir. After all, Pinot is one of the three main grape varieties in champagne and I find the more Pinot there is in the bubbly blend, the more I like the wine.

The problem with Pinot is that it is tough to find a good one under $30. A couple of months ago though, I wrote an article (Pinot for Paupers) that tried to do just that. And while I did find a few wines that were relatively inexpensive while also being relatively tasty, they were few and rather far between.

For the most part, however, I stand by my assertion that “good” Pinot does not come cheap. Why is that? Well, there are a host of reasons: it generally prefers a cooler climate, which can cause problems both in the Spring and Fall; perhaps more than any other variety, Pinot yields need to be low (as yields increase, flavor goes down significantly); and perhaps the biggest reason–fans of Pinot are willing to pay to get the good stuff.

So what is the difference between a less-expensive Pinot and the heavy hitters? The main difference I have found between good “paupers” Pinot and “princes” Pinot has to be on the midpalate–that period of tasting a wine after the initial impression and before the finish. The lesser wines tend to disappear midway through whereas the more expensive wines maintain a constant presence, often expressing a variety of flavors and sensations.

Here are a few “Princes” that I have sampled over the last few months (yeah, tough “job”, I know) that have really stood out. Five of the six are from Oregon (coincidence?) while the Laetitia is from the Arroyo Grande Appellation in San Luis Obispo County, California.

2012 Hyland Estates Pinot Noir Select Whole Cluster: Retail $150. There was only one barrel of this bad boy made, which might help to define the tariff. While I am rarely in this rarefied air, I can say that this wine is fantastic–a translucent crimson that emits allspice and a bit of oak. There was also a bit of heat on the nose, which I did not expect from a 13.4% wine, but on the palate, a whole different story. Everything falls into place wonderfully: black cherry, some earthy smokiness, and an incredible finish. The wine also shows some tannin on the backend–no doubt this wine has a long (perhaps very long) way to go. This does not get a whoa, however, it gets three. Easily. Outstanding. 93-95 Points.

2013 Laetitia Reserve du Domaine Pinot Noir: $42.  Richer than the Estate (Laetitia’a $25 Pinot) with darker fruit-more muscle here, a real bruiser with black and blueberry. Plenty of acidity to go around as well, particularly on the finish. If you like a little bigger Pinot, this is for you. Personally, I would wait at least a couple of years to let the fruit calm down a bit. When it does? Yowza! Outstanding. Now 90-92 Points. In a couple of years? Perhaps more. 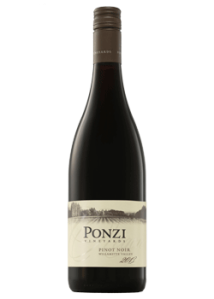 2012 Ponzi Pinot Noir Willamette Valley: Retail $40. Fruity (blackberry), forest floor, and funky initially on the nose, but that blew off with a little time. Really nice black cherry and quite tart on the palate–the acidity lasts all the way through and finishes with a bit of crushed rock. Very Good. 88-90 Points.

The next two wines come from Mark Vlossack’s St. Innocent Winery in Salem, Oregon. I met Mark back in 2010 at the International Pinot Noir Celebration, but I doubt I hardly made a blip on his radar as I had yet to garner my international fame from writing this blog (in case you were wondering, I am still waiting for that to happen). Mark makes some of the most age-worthy Pinots in Oregon, which makes them dead-center in my wheelhouse. The two wines sampled below sold out shortly after I received them, but the 2013’s have just been set free. Even though the 2012 vintage was uniformly hailed by the critics, I am really looking forward to the more difficult 2013 wines as Mark tends to really shine in rainy years.

2012 St. Innocent Pinot Noir Zenith Vineyard: Retail $42. Very rich initially (mocha and raspberry), which was surprising for an Oregon wine. On the palate, the acidity shows up front and center. The fruit and mocha are still there, but certainly in check. Earthy, with depth and verve, this is certainly my kind of Pinot–it does not shy away from the fruit while staying true to the more restrained nature of the variety. Outstanding. 90-92 Points.

2012 St. Innocent Pinot Noir Freedom Hill Vineyard: Retail $42. Dark for a Pinot, really dark. On the nose? Black cherry and earth with a touch of cassis. Where it counts? The fruit is certainly forward, but not overpowering. Dark, but just short of brooding, then the earthiness kicks in. This is a pup, a mere babe, that has so much to give, but it requires patience, a lot of patience. Three years? Perhaps. Five, ten years? More like it. Patience is a virtue to be sure… Outstanding. 90-92 Points now. 92+ in a couple of years…

2012 Soléna Domaine Danielle Laurent Legacy Pinot Noir: Retail $100. I first tried this at an Oregon wine tasting at the Wine Bloggers Conference and I was impressed. I left with a bottle from the host of the tasting who wanted me to try it at home. Whoa. That’s right. Whoa. An earthy nose with some dark berry fruit thrown in. Solid weight throughout with plenty of introspection and verve. Yeah, this is a solid whoa, maybe two. Outstanding. 92-94 Points.

I have been an occasional cycling tour guide in Europe for the past 20 years, visiting most of the wine regions of France. Through this "job" I developed a love for wine and the stories that often accompany the pulling of a cork. I live in Houston with my lovely wife and two wonderful sons.
View all posts by the drunken cyclist →
This entry was posted in Pinot Noir, Wine. Bookmark the permalink.

12 Responses to Pinots for Princes