If I Had To Choose…

Posted on November 12, 2015 by the drunken cyclist

My day job is not all that exciting, which is why I never really talk about it here. In fact, it is rather boring and it involves a lot of numbers so if you ever find yourself with a case of insomnia, give me a call and I could put you right to sleep by telling you what I do.

I use this quite a bit at work.

So why do I do it? Fair question. I do it for a number of reasons: I am pretty good at it, I now have a boss that is fantastic (that was not always the case), and I can come and go pretty much as I please as long as I am getting the work done. I never have to go in early, and rarely have to stay late. I never, ever bring work home with me, and the thought of going in on the weekend is laughable. I can choose to work at home, or go into my office (which I usually do by bike) and I might have a meeting every other week (and that is pushing it).

I never set up the phone in my office, so I rarely get calls from anyone other than my wife and it seems as though everyone thinks rather highly of my work.

On top of all that, I am paid rather well.

But it is rather boring.

I say all this not to boast or brag (and certainly not to have anyone feel sorry for me), but to emphasize that I work to live, not live to work. My job enables me to pay some bills, but it also allots me the free time to write, travel, and think what and where I want most of the time, which I consider a huge upside.

I think about a variety of subjects, but one that has dominated my thoughts recently was this:

If I had to choose to live in another country (for whatever reason–I will leave that up to your imagination), where would I go?

If you have read this blog even once before, you likely know the answer: somewhere in France. While that is right most of the time there are many reasons that I would not always choose France: it is fairly expensive, Paris is great but congested, and then there are the French. I love the French people, but they tend to have this self-righteous indignation that wears thin after about 37 hours.

So where else would I go? Well, it would have to be a place with some semblance of wine culture.

Italy? Far too image conscious for me.

Germany? Far too serious and regimented.

No, if I had to choose where else to move, for me, right now it would have to be Spain. I have not spent a ton of time in Spain, and almost all in the Basque region in the northwest part of the country, but that would be my target. Sure there are problems there, but on this International Tempranillo Day (the red variety of much of Spain), I would vote for the Iberian Peninsula as my current “if I had to choose” destination.

What would be yours?

For your Tempranillo Day enjoyment, here is a solid, modern style (read more fruit and less stuffiness) interpretation of Rioja: 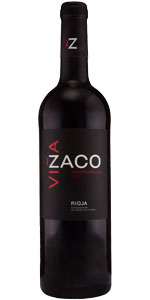 2014 Viña Zaco Rioja: Retail $15. 100% Tempranillo. Rioja is one of the main reasons that my next country might be Spain. It is close to the Basque region, which I love (even though the Basques on the Spanish side tend to be a little disgruntled), and France is but a hop skip and a jump away. Rioja as a wine region is one of the more versatile in Spain with racy whites (made from Viura) and reds (from Tempranillo) that range from brooding, austere, age-worthy tannic monsters to this wine: a fruity and approachable crowd pleaser that drinks well right out of the screw-top bottle. Black cherry and licorice with just the right amount of tannins to hold it all together. This would be a hit by itself or better yet, with a nice paella packing a bit of a spicy punch. Very Good. 88-90 Points.

I have been an occasional cycling tour guide in Europe for the past 20 years, visiting most of the wine regions of France. Through this "job" I developed a love for wine and the stories that often accompany the pulling of a cork. I live in Houston with my lovely wife and two wonderful sons.
View all posts by the drunken cyclist →
This entry was posted in Rioja, Tempranillo, Wine. Bookmark the permalink.

33 Responses to If I Had To Choose…