A Trip to My Own Back Yard: Va La Vineyards

Posted on December 11, 2015 by the drunken cyclist

This past fall, I gathered up a couple of my wine drinking cycling buddies and organized a ride through the Brandywine Valley here in Southeastern Pennsylvania. The roads are gently rolling and lightly travelled (for the most part)—near ideal for getting a good ride in. The Brandywine Valley is also home to some of the best wineries in the state, so I mapped out a route that would take us by three of them: Penns Woods Winery, Va La Vineyards, and Galer Estate.

Last month, I wrote about the visit to Penns Woods were we met the magnanimous and bigger than life Gino Razzi, but we were just getting started. After a quick ten-mile ride, we found Va La Vineyards on the fairly traffic heavy Route 41 in Avondale, PA. I had read as much as I could about the winery and its owner, the enigmatic Anthony Vietri, but that is not really saying much. Va La’s website is bereft of information—entertaining and thought-provoking certainly, full of quotes from others about their experiences at Va La, but it does not provide much insight into the man or the wines.

Through various blogs and interviews by the local press, I was able to glean that after a couple of decades in the Hollywood film industry, Anthony and his wife Karen wanted to leave it all behind and start a winery. After looking in California for a suitable property, the couple decided to return to Anthony’s childhood home of Avondale and grow their grapes on the farm that has been in his family since 1928.

My first impression as we got off our bikes, was the distinct smell of manure wafting through the humidity laden air—Va La Vineyards is sandwiched between a concrete factory and a mushroom farm (which relies heavily on composted manure). Not exactly a Hollywood vision for a winery locale. 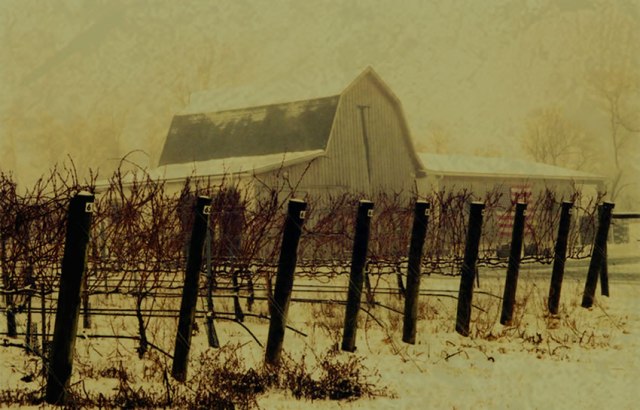 No, it was not quite like this when we visited. From valavineyards.com

Va La is tiny even by Pennsylvania standards, producing fewer than 800 cases annually, but as we made our way into the tasting room and upstairs for the tasting (no small feat in cycling shoes), I was struck by the size of the facility—it could easily hold several dozen people.

As we started with La Prima Donna, Va La’s famed white wine, I was wondering when or if Anthony might show up, and more importantly, what would he be like? I had tried to find out more about his life in Hollywood online, but after hours of searching, I really could not find much.

I did, however, find an article in the Wine Enthusiast, that listed ten much sought after wines “mostly California cult pours [that] are nearly impossible to score” that are available at restaurants across the country. On the list? Harlan ($1,850), Sine Qua Non ($1,600), and Screaming Eagle ($3,750).

Midway through La Prima Donna (the first of many of Va La’s wines that caused me to contemplate the meaning of life), Anthony quietly entered the tasting room. Despite working in the fields “chained to a tractor” most of the day, Anthony certainly has a flair about him. A reserved confidence that is both humble and proud, one who seems comfortable with himself.

He also reminded me of an Italian General in World War I. But maybe that is just me.

General Luigi Cadorna. Give him a different hat, shave the mustache, and…

The winery only produces four wines: a white, a rosé, and two reds. All are essentially field blends and the “recipe” for each is rarely the same. He started with over 30 varieties planted, but has “whittled that down a bit” to about two dozen. Vietri is constantly changing the varieties in the vineyard, taking out poor performing grapes and replacing with those that seem to fare better. When I asked when he might be comfortable with the make-up of the vineyard, he chuckled and said “I have never really thought about that.”

2012 Va La Prima Donna: Retail $42. A blend of Tocai, Malvasia Bianca, Viognier,
Pinot Grigio, and Petit Manseng. Great nose with the Tocai really coming through. Austere on the palate with ginger and white flower at the forefront. Initially, I was a bit underwhelmed, but after a few seconds in the mouth (and no doubt warming a bit), it becomes zingy and focused. I imagine that this wine changes several times over the course of consuming the bottle. Outstanding. 90-92 Points.

All of Va La’s “front” labels are technically the back label. Vietri, in a desire to keep the design simple and unobtrusive, put all the required information on the “back label” which he told the TTB was the front label.

2013 Va La Silk: Retail $32. A field blend of “Corvina Veronese, Barbera, Nebbiolo,
Carmine, Petit Verdot, etc.” (I love that little “etc.” at the end there). Alright. I do not make many proclamations on this site, but I will here: if possible, get yourself a bottle of this wine. Not only will it change your conception about East Coast wines, it will completely pull the rug out from under your stance on rosé wines. Normally, I shy away from saignées, since, well, they usually are just not that good (mainly lacking the requisite acidity). Served near room temperature, this all red wine saignée challenges all of your senses (I did not verify that it challenged my hearing, but I am pretty sure it did): a bit funky and stewed on the nose, but rich and yes silky with intense flavor on the palate. This is a wine that is hard to describe but it is oh so good. This gets a Whoa. And then another. Whoa. This wine will not only challenge your conception of a rosé, it might cause you to question what you have been doing your entire adult life. Outstanding. 93-95 Points.

2013 Va La Barbera:  Retail $50. Technically, Va La only makes four wines, but in years when there is sufficient fruit to make a stand alone varietal wine, Anthony listens to the vineyard and makes a varietal wine. Such was the case in 2013 with Barbera (this wine is 100% Barbera from five different clones). Va La’s first Barbera since 2005, this is deep and dark, even on the verge of brooding with a perfumed nose of caramel, cashews, and tobacco. The wine spent 15 months in oak, but is by no means a heavy-handed wooden beast. Quite the contrary–supple and round, with just enough acidity on the palate, this is wonderful. Great fruit with near impeccable balance. Another Whoa. Outstanding 91-93 Points. 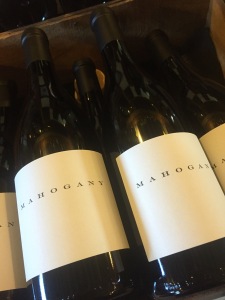 2012 Va La Mahogany: Malvasia Nero, Barbera, Sagrantino, Carmine, Lagrein, Charbono, Teroldego, and Petit Verdot. This wine spent a whopping 27 months in oak, and as such it was decanted for several hours before we arrived. Darker still than the Barbera and more perfumed with blackberry and dark chocolate. On the palate, big and bold, almost the antithesis of Anthony’s personality, but it stops short of being one of those “in your face wines” so clearly there is plenty of Anthony in the bottle. I am not a big red kind of guy, but this is truly wonderful as the multitude of different components meld together into a cohesive whole. The wine is wonderful now, but could easily take on a decade in the cellar. Outstanding 92-94 Points.

Overall, the tasting at Va La was memorable and I hope to be back soon, to perhaps pick away at what makes Anthony tick and to see if there is indeed a little General in him.

I have been an occasional cycling tour guide in Europe for the past 20 years, visiting most of the wine regions of France. Through this "job" I developed a love for wine and the stories that often accompany the pulling of a cork. I live in Houston with my lovely wife and two wonderful sons.
View all posts by the drunken cyclist →
This entry was posted in Barbera, Carmine, Charbono, Corvina, Lagrein, Malvasia Bianca, Malvasia Nero, Nebbiolo, Petit Manseng, Petit Verdot, Pinot Grigio, Sagrantino, Teroldego, Tocai, Viognier, Wine. Bookmark the permalink.

18 Responses to A Trip to My Own Back Yard: Va La Vineyards