The Key to Camping? Foursight

Way back in September, I was out with my family in California for a wedding. It was not your typical wedding by any stretch: It was just off Highway 1 on a farm in a remote section of Mendocino County (one could argue that most of Mendocino County is remote, but…). It was in a barn on an old dairy farm with no running water, makeshift showers, at least 15 miles from anywhere that you might actually want to be.

And we were camping.

It was advertised to me as “glamping” since there were several tents pitched that included platform beds, working lamps, even a nightstand.

But we did not get one of those, since I RSVP’d too late.

Instead, we had my little one person tent that I had not used in over a decade, and we borrowed another tent from my wife’s brother, that would supposedly sleep all four of us, if need be.

Our tent, which we put up in 50 mile an hour winds. You can see the fancy-pant tents in the background.

Why go through all of this? Two reasons: First, the bride was a captain of one of my basketball teams. She was certainly not the greatest player skill-wise that I ever coached, but without a doubt she was the fiercest competitor and had the biggest heart of any athlete I have ever had the pleasure to coach.

In other words, she was one of my favorites.

It was a stunning ceremony.

Second, the wedding venue was about a 30 minute drive from the towns of Philo and Boonville, which are the epicenter of the Mendocino wine industry.

We loaded up the car with myriad snacks, sunscreens, Jarts, sleeping bags, and a cooler filled with, among other items, close to a case of wine and started off on the three-hour drive from Antioch to Elk, CA (population 208), which was the closest town to the campsite/wedding venue. 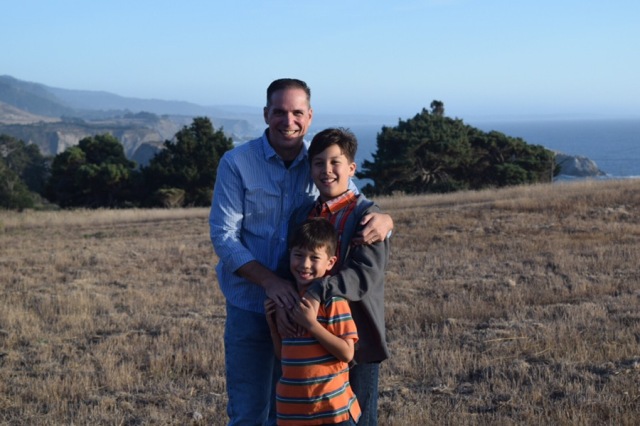 The drive through Mendocino was stunning, particularly the Redwood grove of Hendy State Park along Route 128.

Bowling Ball Beach is not far away.

We had three days of camping, but I had only made one appointment for a wine tasting (in part to appease my wife who felt that we should at least try to experience the outdoors–whatever that means), at Foursight Wines in Boonville.

The winery is a family affair, Bill and Nancy Charles planted their eponymous vineyard in 2001 and their daughter Kristy and husband Joe Webb run the winery, which was established in 2006. Even though the winery and vineyard are relatively new, the Charles family has been in Mendocino County for the better part of a century, starting in the lumber business before turning to farming.

By any stretch of the imagination, Foursight (founded in 2006) is a small winery, producing a mere 1500-2000 cases depending on the year. Joe and Kristy are committed to making wine “the right way” and as such they have never inoculated their wines, relying on completely native yeasts for both the primary and malolactic fermentations..

While most wineries release wines as soon as possible, Joe and Kristy decided from the beginning that they would hold back their wines at least another year, giving the wines more time to mature. This is rare, particularly for small wineries since the need to get cash flowing is real, but it shows the commitment they have to produce quality wines, which certainly was evident during the tasting. 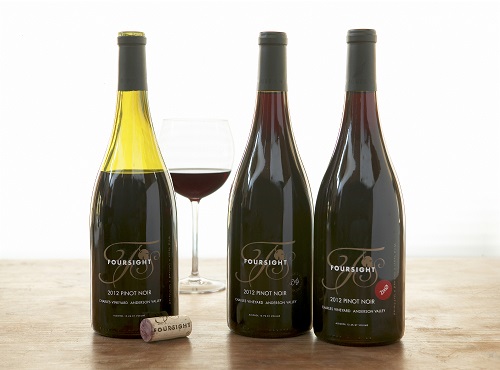 2013 Foursight Wines Charles Vineyard Semillon: Retail $28. Aged in a combination of stainless steel and French oak (mostly neutral, but it serves to round out the wine a bit), this is the only consistently produced Semillon in Anderson Valley. Tropical notes of pineapple picked at 20-21 Brix, which is certainly low by most standards, but it was done to maintain acidity. Fermented with wild yeast and is unfined and unfiltered (so basically, pretty hands off) Really nice. Very Good to Outstanding. 88-90 Points.

2013 Foursight Wines Charles Vineyard Unoaked Pinot Noir: Retail $25. 33% Whole Cluster to add some tannin, and the fruit was harvested a little riper than their other wines since they knew there would be no oak. Kristy sometimes serves it chilled (think Beaujolais). Bright cherry nose, big fruit flavors. A different approach that works. Very Good. 87-89 Points.

The Basket Press at Foursight

2012 Foursight Wines Zero New Oak Charles Vineyard Pinot Noir: Retail $38. 2-5 year old barrels. 30% whole cluster. Gorgeous nose black cherry. Starts off a bit thin but with time en bouche this really takes off. Very nice. I realize that this was likely made with early consumption in mind, but I would like to see where it is in a few years once the fruit dies down just a touch. Very Good to Outstanding. 89-91 Points.

2012 Foursight Wines Charles Vineyard Pinot Noir: Retail $46.  40% whole cluster and 40% new French oak, with both fermentations occurring naturally (no yeast inoculation). Another one that starts a bit slowly but really kicks in on the mid palate, with a wonderful finish. There is no doubt in my mind that this wine simply needs a bit more time (particularly after I tasted the ’09). Still, it is Outstanding now, but a bit of patience will certainly be rewarded. 90-92 Points (with perhaps 92-95 potential).

2012 Foursight Wines “Clone 05” Charles Vineyard Pinot Noir: Retail $49. 100% Pommard from two different blocks with two different rootstocks. Best nose of all the wines thus far, reminiscent of a rich cherry cobbler. I could sniff this for a while. On the palate, this clearly gets a “Whoa”: Rich but not bold and considerable depth this is really fantastic Pinot. Outstanding. 92-94 Points.

2013 Foursight Wines Paraboll Pinot Noir: Retail $54. Foursight purchased the rights to use the “Paraboll” name from Londer Vineyards when the Londers sold off their somewhat legendary holdings. Joe and Kristy maintain the same blend that was used by Londer, which only produced the Paraboll in the best years. A bit of a departure from their other wines as this is a much bigger style. They leave the fruit 10-12 more days on the vine and have a more aggressive oak program, which results in a fruitier Pinot with a smokier nose. Definitely bigger and even softer than their other wines, but it is still quite tasty. Outstanding. 91-93 Points.

Kristy offered us the rest of the bottle to take back to the campsite. We said yes.

2009 Foursight Wines Charles Vineyard Pinot Noir: Retail $50. 20%new wood. 30% whole cluster. At the end of the tasting, Kristy asked if I would like to try one of their library wines. I tried not to answer too quickly seeing that we had just met and I did not want to frighten her. It was a different vintage, of course, but if this is any indication of the (at least shortish term age-ability) of Foursight Wines, well, in a word, whoa. Still great fruit, but more complex flavors and depth. Outstanding. 93-95 Points.

After our wonderful time with Joe and Kristy, we visited a few other wineries in the region, but it was Foursight that certainly stood out. It will not be the last time we visit Foursight or Mendocino, but I am pretty sure the next time we wont be camping.

I have been an occasional cycling tour guide in Europe for the past 20 years, visiting most of the wine regions of France. Through this "job" I developed a love for wine and the stories that often accompany the pulling of a cork. I live in Houston with my lovely wife and two wonderful sons.
View all posts by the drunken cyclist →
This entry was posted in Pinot Noir, Semillon, Wine. Bookmark the permalink.

4 Responses to The Key to Camping? Foursight