Searching for Identity in Bottles of Wine

When I was a kid, I really did not think much about my heritage. I knew I was born in Ohio to parents who were also born in the state, but I did not know much beyond that. I did know, however, that my last name, “Kralik” (kray-LIK) was the subject of much derision by my classmates throughout middle and high school (Crap-lick, Crack-lick, and Cray-fish being the most “clever”).

For years I did not think about it much—I actually tried to block it out. There were plans to change my last name on my 18th birthday, but once I found out it involved money, well….

I remember I had asked my father about our family history a couple of times, but let’s just say that my father is not the most conversant nor introspective person on the planet. The most I ever got out of him was: “My great grandparents came from Yugoslavia, I think.” (Probably not, since “Yugoslavia” did not become a country until 1918 and did not adopt that name until a decade later, but pointing out that my father was wrong was never a good idea.)

As one might imagine, “Yugoslavia” is not the most glamorous word that could come out of one’s mouth when asked to indicate one’s country of origin, but being a bit of a history buff, I decided to roll with it. I discovered that my last name was likely of Serbo-Croatian origin, which made sense since it could be written using the Cyrillic alphabet (which is used in Serbia):

In college, I travelled to Yugoslavia on my way to Turkey—I remember distinctly being packed on a train with thousands of chain-smoking locals, stopping  at the Italian/Yugoslav border and having a Kalashnikov pressed firmly against my left temple for a few very tense moments.

It was on that train, right before getting off in Sarajevo, that a kind Serbian indicated that my last name was indeed Serbian and translated to “Rabbit hunter for the King.”

That was fine for me at the time (primarily since the Serbs sided with the Allies and the Croats were pals with the Nazis), but then a fellow by the name of Slobodan Milošević gave Serbs somewhat of a bad name.

So I decided that I would be Croatian instead.

On that same trip back in college, I had planned to spend some time along the Yugoslavian (Croatian) coast, but a few tense days on a Greek ship in the Mediterranean quickly put an end to that plan.

Ever since, I have been determined to get back to my “homeland” and one of these days I will, until then, I will have to settle on tasting a few wines from the region, which is burgeoning into an Eastern Europe wine region worthy of note. 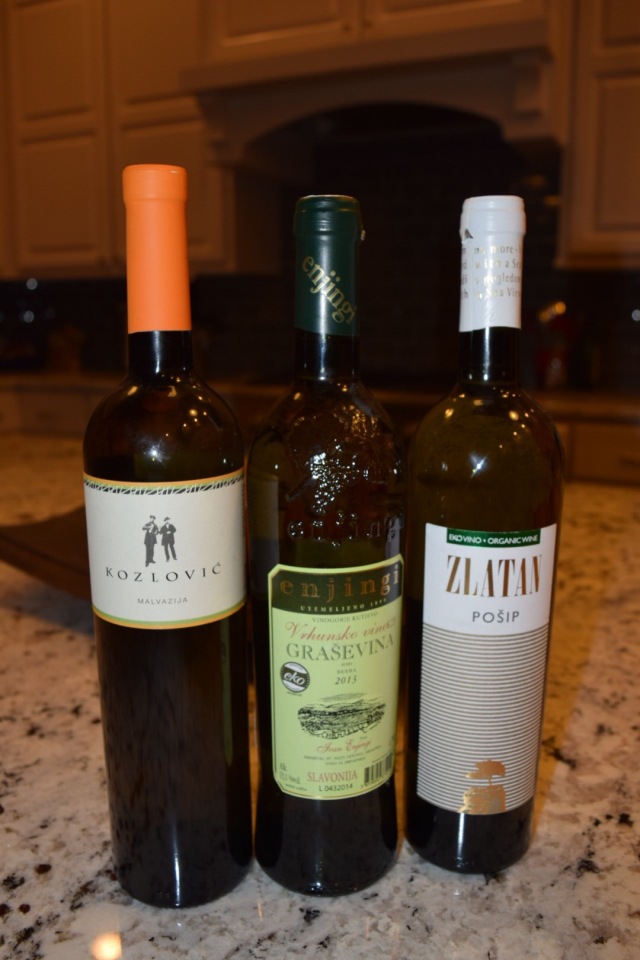 2014 Kozlovic Malvasia Istria Croatia: Retail $20. 100% Istrian Malvasia. Pale yellow with a slight green tinge in the glass with stone fruit and grapefruit galore, there is also a touch of funk that is certainly appealing. Light and lively on the palate without any oak the minerality shines through. Nice depth, but the finish is a bit brief and thin. Still, Very Good. 87-89 Points.

2013 Enjingi Grasevina Kutjevo, Croatia: Retail $23. 100% Graševina (Welschriesling). Unrelated to Riesling, this wine variety is the most widely planted in Croatia. Pale yellow with a slight green tinge, apple, a bit of peach, and herbal notes of mint and sage. Good acidity and considerable minerality, this has a gravitas to it that some might not appreciate, but this is a wine to search out for nothing else than the experience. It requires a bit of time in the mouth, to get past the somewhat gritty mineral aspect and to its rich, luscious side. Outstanding. 89-91 Points.

2014 Zlatan Pošip Sjeverna Dalmacija, Croatia: Retail $22. 100% Pošip (po-ship). Certified Organic. A golden-yellow with apricot, fig, and smoky funk (again, a good thing for me), originally from the island of Korcula, this is a hybrid of two other grapes there. Rich and unctuous on the palate, a really interesting wine. Plenty of acid, but also weight with a lingering finish. Very Good to Outstanding. 89-91 Points.

2008 Roxanich Teran Re Istria, Croatia: Retail $35. 100% Teran. Dark crimson without much indication of bricking (age). Teran, apparently, can be rather harsh, thus this was aged for five years in large oak barrels (3,800-7,000 liters). Considerable Brett on the nose, masking the dark red fruit, but announcing its Old World heritage. An interesting combination of austerity up front, followed by rich red fruit and a decided meaty aspect. A captivating wine that is reminiscent of better Chianti Classico. Outstanding. 90-92 Points.

2014 Pilizota Plavina North Dalmatia, Croatia: Retail $15. 100% Plavina. Touted on the label as “Croatia’s most underrated coastal red grape.” While I have no reference to confirm or challenge that assertion, I can say that it is a compelling wine: ruby red color that glistens translucently in the glass with red berry fruit and a touch of menthol. The grapes come from rocky soils that abut the Adriatic. A delicate, lovely wine with depth and balance. While comparing it to an Old World Pinot might be unfair to both, it certainly would pair nicely with both meatier fish (salmon), grilled chicken, and pork. Outstanding. 89-91 Points.

2013 Pilizota Babić North Dalmatia, Croatia: Retail $18. 100% Babić. Certainly darker than the Plavina with blacker fruit and mint. A heftier wine made from one of the regions more widely planted and well-respected varieties, the wine has luscious fruit at the front, mostly plum and black currant, which is nicely tamed by the tartness through the mid-palate. This is a wonderful wine right now, but one could wait another year or two easily. Outstanding. 89-91 Points.

2011 Zlatan Plavac Mali North Dalmatia, Croatia: Retail $23. 100% Plavac Mali. The back label boasts that “In Croatia, if you are having guests over…and they bring a bottle of Zlatan…it usually means they like you and that you’re special.” Well…. I am usually more than an ounce skeptical reading copy like that, but this inky-dark, blackberry jam of a wine delivers. Wow. Rich and ripe all the way through, but it finishes with noticeable tannic grip that screams “Keep me for (at least) another five years!” But how could you do that to your friends who anointed you with such a bottle? You can’t. Drink it with them, proving how special you are. Outstanding. 91-93 Points.

I have been an occasional cycling tour guide in Europe for the past 20 years, visiting most of the wine regions of France. Through this "job" I developed a love for wine and the stories that often accompany the pulling of a cork. I live in Houston with my lovely wife and two wonderful sons.
View all posts by the drunken cyclist →
This entry was posted in Babić, Malvasia Bianca, Plavac Mali, Plavina, Pošip, Teran, Welschriesling, Wine and tagged Babić, Plavina. Bookmark the permalink.

12 Responses to Searching for Identity in Bottles of Wine