Posted on February 12, 2018 by the drunken cyclist

2008 Amelle Zinfandel Buck Hill Sonoma County: Retail $24. I asked my wife to pull a bottle from the cellar without my knowledge. She had writ large with the cellar and she chose this. I would like to say that I was perplexed, but I was not. I knew this from the jump. Black currant and blackberry with touches of black pepper and eucalyptus. Whoa. I knew immediately that this was “my” Zin, a Pinot lover’s Zin. A cold climate Zin. An Amelle. Whoa. Outstanding. 92-94 Points.

NV Paul Berthelot Champagne Eminence: Retail $45. 45% Pinot Meunier, 30% Pinot Noir, 25% Chardonnay. Wow. A totally different ballgame from the last bottle that I received from Last Bottle. The first one had been corked, and the second was drab and lifeless. This one? Whoa. Yeasty with lemon and stone fruit on the nose, and exceptionally delicious on the palate. Great fruit, length, and depth. Whoa. Outstanding. 92-94 Points.

2007 Failla Pinot Noir Keefer Ranch: Retail $50. We are big fans of Failla, but our stock is dwindling, so it is a relatively rare occasion that we open a bottle. More than a decade out, this is really an amazing wine. Cloudy in the glass surprisingly, with Black cherry, earth, and verve. Whoa. On the palate still vibrant and tart, with said black cherry and spice. Incredible. Outstanding. 92-94 Points.

2005 Dutch Henry Winery Argos Hillside: Retail $70. 40% Cabernet Franc, 33% Merlot, 27% Cabernet Sauvignon. I asked my wife to go pick out a red from the cellar. She brought this back and I tasted it blind. Dark and opaque in the glass with black currant and blackberry and a smidge of green. On the palate, holy goodness. Integrated and full, with plenty of verve. Finish near off the charts. Outstanding. 91-93 Points.

2003 Chateau St. Jean Cabernet Sauvignon Cinq Cépages: Retail $80. 78% Cabernet Sauvignon, 10% Merlot, 7% Cabernet Franc, 3% Malbec, and 2% Petit Verdot. Enduze decant for about an hour. Ever so slight indication of stewed fruit but an incredible nose: Coffee grounds with black raspberry and cassis. Whoa. On the palate? Whoa again. Rich and full, this is close to mind-blowing. This is still fruity, deep, and velvet on the tongue with a length finish. Whoa again and again. Outstanding. 94-96 Points.

2005 Villa Erbice Amarone della Valpolicella Vigneto Tremenel: Retail $70. 60% Corvina, 20% Corvinone, 10% Molinara, 10% Rondinella. I don’t drink a ton of Amarone and this is far from the top of the heap, but this is pretty stellar. Stewed and saucy with a porty-cassis nose. Rich and Port-like on the palate without the heat. Fruity and fun, not world-blowing, but a hit playing British Trivial Pursuit. Very Good to Outstanding. 88-90 Points. 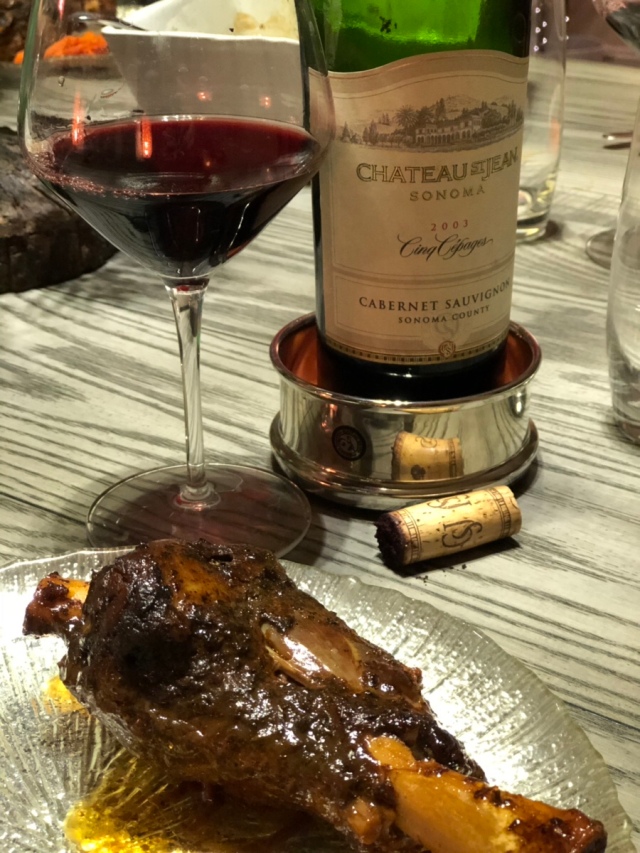 WINE OF THE WEEK: Even though I never really think about it, looking at my cellar, it is probably safe to say that I am a bit of a wine collector. When I started buying wine, I would make purchases with the idea of laying the wine down for a bit, to let it age. It dates back to perhaps the two wines that sent me down the path to wine obsession. I do not remember the producers, but I certainly remember the wines. I was leading a bike trip in Burgundy probably about 20 years ago (maybe less—but it was before the switch to the Euro) and we were at a restaurant in Dijon that had an incredible wine list at ridiculously reasonable prices.  It turns out there were several wine geeks on the trip, and they wanted to spend a little extra and taste some older wines. The first was a 1962 Beaune, a 30+ year old wine that was on the list for about 400FF (roughly $65). Wee bought two. And both were sublime. So we ordered another, but dove a little deeper—a 1976 Chambertain, a Grand Cru from one of Burgundy’s greatest vineyards for 700FF (about $120). And it was ethereal—a wine that transformed me into a fanatic. Both wines were categorically different from any Burgundy that I had tasted prior, which I attributed to the age of the wines. Returning to the California after the summer in Europe, I realized that it is very difficult to acquire wine with any significant age on it—and that the best (only?) way to drink older wines was to buy them and wait. That approach drove my wife crazy for years as she wanted to drink the wines as soon as we got home from the winery.

These past couple of years, though, as we have been “harvesting” many of those older wines, she has curiously stopped complaining. These past few weeks, we have been going through a few more of those wines since we learned that our neighbors, with whom we have shared many a bottle, would be moving out of state. We took the 2003 Chateau St. Jean Cabernet Sauvignon Cinq Cépages over to their house and it was clear that the extra age had served it well, and the pairing with braised short ribs heightened the wine too. But there was a third factor, an additional element that can elevate a wine even further, more than a few extra years in the cellar or a perfectly prepared meal. No, the one element that elevates wine to its highest heights is sharing the bottle with friends. We wish our friends well, of course, but we will miss the many nights we spent together over a wine with a few years on it.

I have been an occasional cycling tour guide in Europe for the past 20 years, visiting most of the wine regions of France. Through this "job" I developed a love for wine and the stories that often accompany the pulling of a cork. I live in Houston with my lovely wife and two wonderful sons.
View all posts by the drunken cyclist →
This entry was posted in Cabernet Franc, Cabernet Sauvignon, Chardonnay, Chenin Blanc, Corvina, Corvinone, Malbec, Merlot, Molinara, Petit Verdot, Pinot Meunier, Pinot Noir, Rondinella, Zinfandel. Bookmark the permalink.