Posted on February 19, 2018 by the drunken cyclist

2007 Cargasacchi Pinot Noir Cargasacchi-Jalama Vineyard: Retail $35. Another month or so further on, and not surprisingly, is still stellar. Fairly dark and brooding with eucalyptus, pine and dark berry fruit arranged in an alluring amalgamation in the glass. The wine is just as fabulous on the palate with rich, dark fruit, plenty of earth, and hints of tannin on the finish. Just short of a whoa. Outstanding. 91-93 Points.

2008 1789 Wines Pinot Noir Single Vineyard, Chehalem Mountains: Retail $45. I met the winemaker, Isabelle Duarte back in 2010 when I was out in the Willamette for IPNC. She was, and is, the winemaker at De Ponte which was my host winery for the event. While her wines for her main employer were stellar, her own label wines were meatier and sexier. Dark red berry fruit, savory, and herbal (sage). Well-balanced and lovely, this is in a fabulous place right now. The tannins on the back-end indicate that there might be some more integration to go–hard to imagine this getting even better, but it just might. Outstanding. 92-94 Points.

NV Gruet Winery Brut Rosé: Retail $15. 100% Pinot Noir. If you are a fan of the bubbles and you don’t have a healthy stock of Gruet from New Mexico in your cellar, ready for the mid-week pop, well, you just have not been paying attention. I love this wine for a ton of reasons, but near the top has to be its color: a vibrant pink with medium bubbles. But also good fruit, verve, and esoteric wine geekiness (waaay affordable sparkling wine with a French pedigree from New Mexico?). Not a world beater, but for under $15? Giddy-up! Very Good to Outstanding. 88-90 Points.

2005 Domaine / Maison Vincent Girardin Santenay 1er Cru La Comme: Retail $50. 100% Pinot Noir. We had friends over and as she sometimes does, my wife heads into the cellar and pulls out a wine for us to taste blind. Darker in the glass, in both color and aroma, than one would consider “typical” for a red Burgundy. One could argue that Santenay is not a “typical” Côte d’Or appellation nor is 2005 a “typical” vintage. Santenay is the southern-most appellation and is known to be more rustic and coarse. 2005 was seen as a near “perfect” vintage with both quality and quantity. This wine is dark, opulent, and rich, which flies in the face of the its light, earthy, and introspective reputation. This is certainly more New World in style but clearly comfortable in its skin.. Outstanding. 91-93 Points.

2010 Simonnet-Febvre Chablis 1er Cru Côte de Léchet: Retail $40. 100% Chardonnay. Well, now, that’s better. The last bottle of this wine was technically “good” but it was not what an eight year-old 1er Cru Chablis should be. A bit dark in the glass. No, it is pretty darned dark, particularly when one considers that Chablis is usually lighter than more southern Burgundies. In the glass, some classic Chablisienne aromas of lemon and wet rock. On the palate, there are hints of oxidation, but it is mostly rich fruit and plenty of minerality. Outstanding. 90-92 Points. 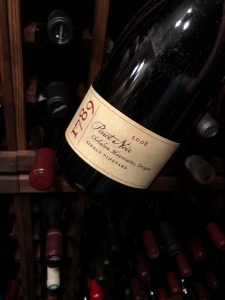 WINE OF THE WEEK: It seems as though I went back to basics this week—as I have mentioned before over the course of my six-year span of writing this blog (once again, I forgot to properly mark my blogiversary), I have mentioned that the roots of my wine appreciation are firmly in the wines and vines of Champagne; it was the first region that I researched and studied with an academic approach. As many know, Pinot Noir and Chardonnay figure prominently in the production of champagne and after feeling relatively confident with my understanding of the region, I branded out to other regions. My second region to study? Burgundy, the home of Pinot Noir and Chardonnay. Thus, this week felt as a return, a re-centering of sorts, as I only popped bottles that contained one or the other of those noble Burgundian varieties. I was pleasantly surprised by both of the Burgundies I opened this week: the ’05 Girardin Santenay La Comme was sublime and the ’10 Simonnet-Febvre Chablis Côte de Léchet was more of what it should be—the last bottle of it I had opened was close to tragic. As I mentioned in the note, all of the NV Gruet Winery wines should be plentiful in any cellar—the value there is simply off the charts. That leaves the two American Pinots. The ’07 Cargasacchi was nothing short of stellar, but the 2008 1789 Wines Pinot Noir Single Vineyard was close to other-worldly—I cringed when my wife selected this for me to taste blind—I think it has several years to go before maturity—but at the same time I was delighted. I would much rather open a wine a day to early than a day too late.

I have been an occasional cycling tour guide in Europe for the past 20 years, visiting most of the wine regions of France. Through this "job" I developed a love for wine and the stories that often accompany the pulling of a cork. I live in Houston with my lovely wife and two wonderful sons.
View all posts by the drunken cyclist →
This entry was posted in Chardonnay, Pinot Meunier, Pinot Noir. Bookmark the permalink.