On National Rosé Day (June 9th), I invited a few writers here in Houston to my house for what I believe to be was the largest blind tasting of American True Rosés in history. What is a “True Rosé”?

Well, there are essentially three ways to make a rosé wine. The first, which is rarely practiced outside of sparkling wine production, is simple blend of red wine and white wine. The second, which is widely practiced around the world, is called the “Saignée Method” where shortly after a red grape crush, a portion of the grape juice (after brief contact with the skins) is bled off (“saignée” means “bled” in French).  This bled off wine is then vinified as if it were a white wine.

The third option is what I call a “True Rosé.” In this process, the grapes are raised, picked, and processed with the idea of making a rosé in mind. True Rosés are therefore not a byproduct of red wine production, they are intentionally or purposefully made. They are True Rosés. 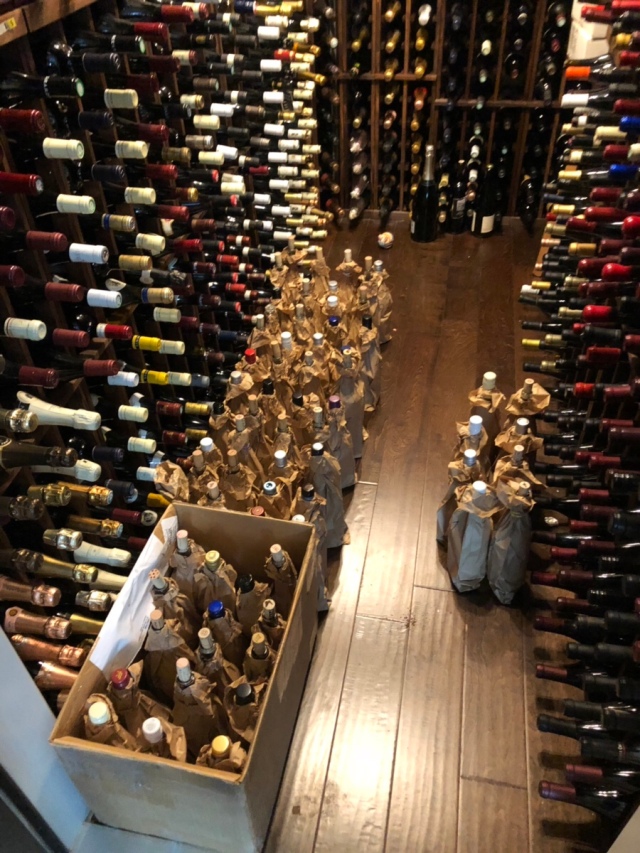 Since this is my last post on the tasting that we staged at our humble abode this past June, I thought I would write a bit about my general perceptions, my pre-conceived notions, and end with a healthy dose of statistics (which will likely put most to sleep, but is firmly in my “geek zone”).

Simply put, there is no getting around the fact that 68 wines at one sitting is a sheet-ton of wines to try. No I know that there are a ton of “professional tasters” that are just getting warmed up after 60 plus wines, but I will reserve judgment on what I think about that practice (it’s stupid—so much for being reserved).

Tasting that many rosés in a short time, I learned a few things:

I contemplated running a host of complex statistical analyses: ANOVA, non-parametric t-tests, even various regressions (linear, multiple, logistic, stepwise). In the end, I decided on running several correlations since they are the easiest to understand, and I no longer have access to sophisticated statistical software.

Basically, a correlation is used to determine whether two variables are related or connected (the word interdependent is also used). The test used results in a number between 0 and 1 where zero indicates no relationship and one defines a “perfect” correlation. The number can either be positive or negative, depending on the nature of the relationship. In a positive correlation, as one variable increases, so does the other (the longer you ride a bike, the more calories you burn), and a negative correlation implies an inverse relationship (the more you drink, the less coherent you become).

Our stats class over, here are the correlations that I ran:

The relationship between age of the wine and relative quality (as perceived by me):

Perceived quality and order in which the wine was tasted:

There is a common phrase among statistical types: “correlation does not imply causation.” In other words, just because two variables are correlated does not necessarily mean that one causes the other, but there does seem to be some sort of weak relationship  between perceived quality and age of the wine (older rosés generally rated higher). An interesting finding for those who think that rosés should be consumed as young as possible (and lends some credence to my theory that True Rosé can age).

One could also argue that there seems to be a weak negative correlation between perceived quality and when it was tasted in the line-up (i.e., that later tasted wines generally scored lower), while that certainly is a concern, statistically speaking it did not reach the 0.3 threshold, so it is dismissed as little to no correlation.

Aren’t you sorry you did not pay more attention in that Stats class in school?

A couple of weeks ago, seven of us tried 68 American Rosés on Saturday, trying to find the best. As promised, I am publishing my actual notes from the tasting, which we tasted in 17 flights of four wines. Here are flights 13-15. 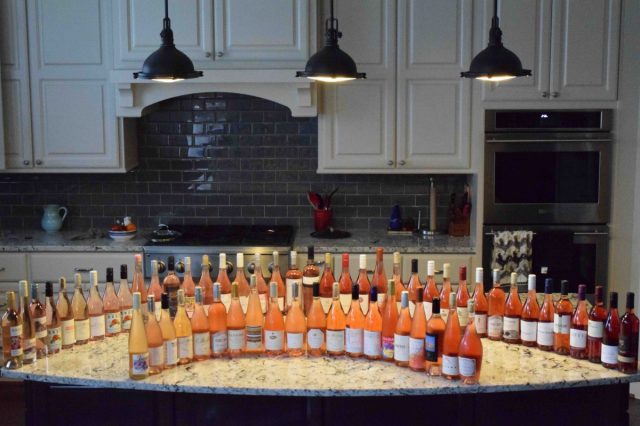 Almost all 68 (I received a few more after this photo).

2017 Wilakenzie Estate Pinot Noir Rosé, Willamette Valley, OR: Retail $23. Light pink. Strawberry and a touch of funk. Good fruit, moderate acidity, really nice. This is perhaps the best one in a while. Outstanding. 90-92 Points.

2017 Onward Rosé of Pinot Noir, Redwood Valley, CA, Hawkeye Ranch: Retail $22. Really pale. Closed on the nose with not much fruit, but on the palate, I have to say, there is some subtle complexity here. This might need some time. Now? A silent killer, in a few months? Could be a cold-blooded assassin. Very Good to Outstanding. 89-91 Points.

2017 J. Bucher Rosé of Pinot Noir, Russian River Valley, CA: Retail $25. A touch of menthol on the nose, but surprising weight on the palate, with rich fruit, good tartness, and a relatively short, but vibrant finish. Very Good to Outstanding. 89-91 Points.

2016 Passaggio Tempranillo Rosé, Clarksburg, CA: Retail $32. Really light in color and fairly closed on the nose. Eventually, a bit of red fruit. Also closed on the palate, but after a bit of time en bouche it began to sing: complex flavors and above average finish. Nice. Very Good to Outstanding. 88-90 Points.

I have been an occasional cycling tour guide in Europe for the past 20 years, visiting most of the wine regions of France. Through this "job" I developed a love for wine and the stories that often accompany the pulling of a cork. I live in Houston with my lovely wife and two wonderful sons.
View all posts by the drunken cyclist →
This entry was posted in Cabernet Franc, Counoise, Grenache, Pinot Noir, Wine, Zinfandel. Bookmark the permalink.