By the time you are reading this, I will have theoretically landed in Paris and will be on a train to Auxerre, a city in the northern part of Burgundy, where I will be doing a bit of “research” before my cycling trip begins there in a couple of weeks. This week, I did a little “research” at home before I left, drinking through a few Chardonnays.

2011 Mer Soleil Chardonnay Silver Unoaked: Retail $25. While few in the wine world would mistake a Wagner wine for a Burgundy, I decided to open this during my own little “Burgundy week” since I was going to the neighborhood pool and really did not know whom I might encounter. I bought a few of these several years ago despite the hefty ceramic bottle (a gimmick I still don’t understand). The previous bottles have been fine, as was this one, but clearly it is not getting any better, so drink up. Deep golden color as it is poured out of the ceramic (gimmicky) bottle with honeyed lemon, an iota of funk, and some spice. Not nearly as bad as I feared when I saw the color, with that honeyed aspect up front and center. There is also a slight oxidized note, but that works well with the honey. Not what most envision when they think “Chardonnay” but it works, at least for me. Very Good. 86-88 Points.

2010 Domaine Du Mont M. Bressand Viré-Clessé: Retail $24. 100% Chardonnay. Viré-Clessé is a relatively new appellation in Burgundy, located in the Mâconnais, just north of Beaujolais. It is one of the few spots in the region that one can find (relatively) reasonably priced Chardonnay—doubtful that one would mistake it for one of its more famed brethren to the north (e.g., Meursault, Chassagne-Montrachet), but there are some solid wines coming out of the region. Like this one. I bought a few bottles of this from the oppressive Pennsylvania Liquor Control Board (PLCB) for the reasonable price of $13. The first bottle was good, the second was better, and this one? Straight up baller. In a Goldilocks-type paradigm, this last bottle from the new-ish Southern Burgundy appellation knocks it out of the park. Golden color, honeyed nose of peach and pineapple, this is closer to a Chenin from Vouvray than a Chard form the Côte-d’Or. What to make of it? Impressive and Outstanding. 91-93 Points.

NV Piper-Heidsieck Champagne Extra Dry: Retail $45. 50-55% Pinot Noir, 30-35% Pinot Meunier, 10-15% Chardonnay. (While technically not a Chardonnay, there is some in there, and I felt like bubbles, so it counts for “Chardonnay Week.”) Way back when, as I started this fun but expensive voyage of wine appreciation, I was living in Sausalito, California on a shoe-string budget (insert “teachers should get paid more” comment here). In order to fuel my insatiable need to learn more about wine (without necessarily paying for it), I would attend tastings at my local Beverages & More store. They happened to be led by none other than Wilfred Wong, wine storyteller extraordinaire and über nice guy. I remember distinctly the sparkling wine tasting that he held one chilly (for Greenbrae) winter evening. We tasted through a bevy of bubbles, but the Piper-Heidsieck Extra Dry really stood out and it remains a favorite to this day. Rich fruit (lemon and pineapple), plenty of minerality, and oodles of yeasty goodness. Not sweet by any means, but the extra sugar in the dosage rounds out the vibrant acidity just enough. Very Good to Outstanding. 89-91 Points.

2005 Simonnet-Febvre Chablis Grand Cru Les Preuses: Retail $75. 100% Chardonnay. I am heading to Chablis shortly, so I decided to pop this nearly 13 year-old wine in preparation. I originally bought four of these bottles from the Pennsylvania Liquor Control Board (PLCB) for a pittance. I should have known: two of the first three bottles were bad–oxidized and virtually undrinkable. This fourth bottle? Certainly oxidized, but not as badly as the other two. In fact, as the wine warmed, this wine became decidedly better. While not completely “fine” this is exhibiting some of the characteristics that one would expect from an older Chablis: enhanced minerality, richness of flavors, a subtle nuttiness. I like it. I do. But it is not what it should be and I have to toss it on to the growing heap of oxidized white Burgs. Flawed. 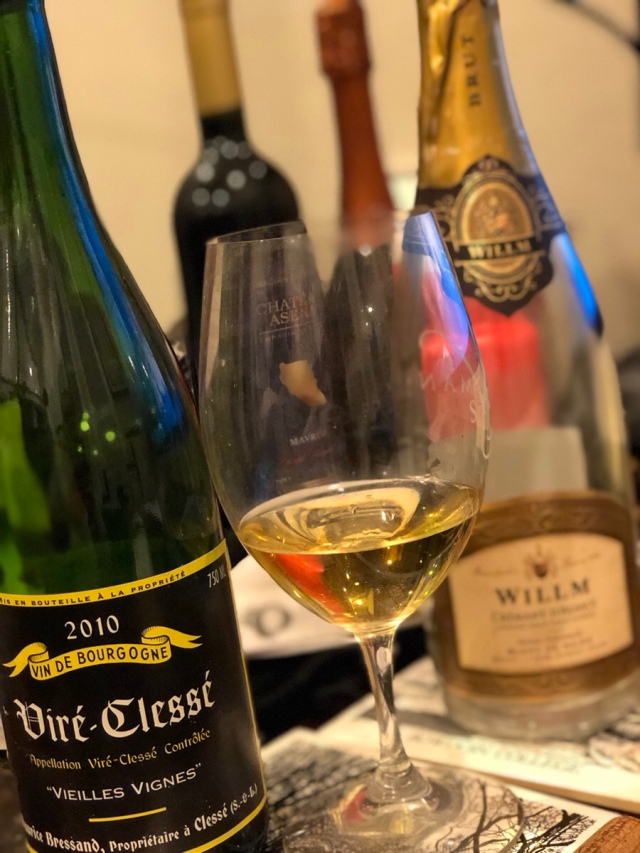 WINE OF THE WEEK: Choosing this week’s Wine of the Week was fairly straightforward for once. I am in the airport, waiting for my flight to Dallas where I will then catch a flight to Paris, so it makes sense that a French wine needs to be selected as WotW. Since one of the three was flawed, the choice was whittled down to two, and while Piper-Heidsieck is one of my favorite champagne  producers, I am headed to Burgundy shortly after I land at Charles de Gaulle airport. Thus, the 2010 Domaine Du Mont M. Bressand Viré-Clessé Vielles Vignes takes the top honor this week. While I won’t actually be as far south as Viré-Clessé, I am taking some creative liberty here (I am actually going to be in Chablis, but the Simonnet-Febvre Les Preuses, was a pretty solid disappointment and selecting it would be a kin to choosing a Most Valuable Player on a team that won only one game all year–those of you that followed my travails coaching my son’s basketball team this year know of what I speak).

I have been an occasional cycling tour guide in Europe for the past 20 years, visiting most of the wine regions of France. Through this "job" I developed a love for wine and the stories that often accompany the pulling of a cork. I live in Houston with my lovely wife and two wonderful sons.
View all posts by the drunken cyclist →
This entry was posted in Champagne, Chardonnay, Pinot Meunier, Pinot Noir. Bookmark the permalink.