Recounting the Worst Ten Days in my Life (This Should Be Fun): Part Eight—Home Stretch

Posted on September 13, 2018 by the drunken cyclist

Late last fall, what first seemed as a rather innocuous email turned into a press trip to both a region I had never visited (Beaujolais) and an event of near mythic proportions (Hospices de Beaune). I took the opportunity to also spend some time visiting some dear friends in Paris before turning southward.

My trip to France came on the heels of the Wine Bloggers Conference where I got very little sleep, and coupled with a sleepless overnight flight, I was at best on fumes. My greatest fear–being ill during two rather important wine-centric events–was a distinct possibility.

After a brief stay in Paris and a wonderful dinner in Savigny-lès-Beaune, I feared that the lack of sleep would finally catch up to me and it did, in a big way during the Hospices de Beaune. I was sicker than I had been in a very long time, spending hour after hour in bed, rising only to attend a few events.

I then made my way down to Beaujolais, where I was among a handful of journalists tasting through many of the current releases of producers of Moulin-à-Vent, one of Beaujolais’ ten Cru Villages, which can produce some of the most structured and longest lasting wines from the region.

On the morning of the big tasting, I woke with considerable trepidation as we were to taste around 125 wines that day in precisely three hours. As the result of some rather divine intervention, though, my sinuses cleared up and enabled me to smell that morning.

After the marathon tasting in the morning, we had a quick lunch and then we were off; each journalist selected three wineries to visit and we would have about an hour and a half at each stop before returning to the hotel for a farewell dinner.

Although I was able to smell still, I was exhausted after a solid week of being ill and sleeping only intermittently. I had hoped for an hour or so for a quick nap, but there was no time in the schedule for such dalliances, so I was off to my first stop, Château Bonnet. 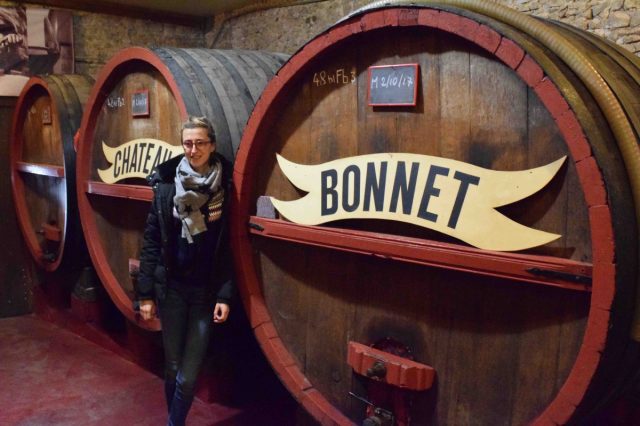 Château Bonnet was built in 1630, when Sir Bonnet, a member of the Mâcon City Council, purchased what was an old hunting lodge and proceeded to plant the first vines of the estate. Pierre Perrachon purchased the estate in 1973, and he quickly set out to restore the château and acquire more vineyards (most notably in Juliénas). When Pierre retired in 2004, he passed the property to his son, Pierre-Yves.

A sign hanging at Château Bonnet: “Human Life Expectancy: 57 years for a water drinker. 70 years for a wine drinker. It’s your choice.”

Today, Pierre-Yves still runs the property, but he has hired on his daughter, Charlotte, as the head winemaker, making her the third generation Perrachon winemaker. The estate is now 20 hectares (46 acres), 2.5 (5.7 acres) of which are in Moulin-à-Vent and they produce between 60-80k bottles (5000-8000 cases) a year.

The barrel room at Bonnet.

There is not a lot of white wine produced in Beaujolais, but ChIateau Bonnet’s is particularly tasty.

My second stop was the Château du Moulin-à-Vent, one of the venerable estates in the appellation. The first mention of the domaine was in 1732 (when it was known as the Château des Thorins–the name of the hill where the estate sits), but it was likely producing wine in the area since the 16th Century. Once the AOC (Appellation d’origine control) was established in 1936, the name changed to the current: Château du Moulin-à-Vent.

The building itself at Château du Moulin-à-Vent dates from the early 19th Century.

The Parinet family purchased the domaine in 2009 (only the second time in its history that the estate has been sold) with a renewed commitment to quality. They have replanted many of their 37 hectares (85 acres) and have focused on highlighting the differences between the individual vineyards. Annual production is right at 80k bottles (8k cases), but that will likely increase gradually. 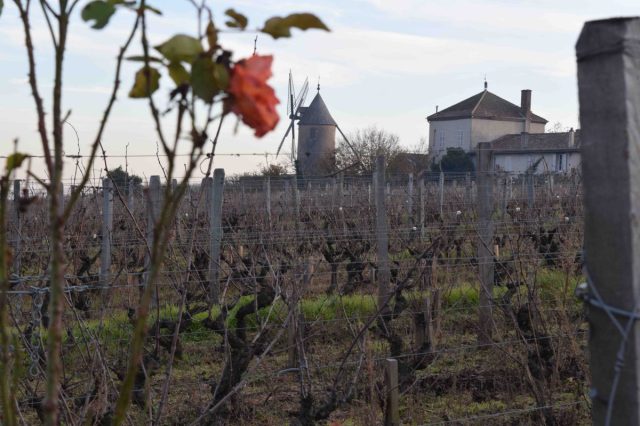 The actual moulin-à-vent (windmill) among the vines. 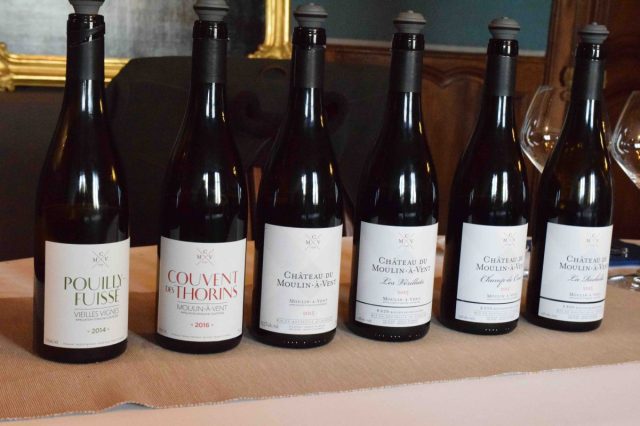 I tasted through the Château’s range of wines.

With the sun setting, I had one more visit….

My last stop was at Château de Chénas, not only the bigger producer in Moulin-à-Vent, but the largest producer of Chénas, another of Beaujolais’ ten cru villages. Like Château du Moulin-à-Vent, Château Chénas is centuries old, dating from the middle ages; the building itself was constructed in the 17th Century.

The barrel room at Chénas.

Perhaps a disappearing phenomenon in France, the Château de Chénas is a wine cooperative. Over 100 grape growers contribute to the Domaine where the Chef du Cave, Didier Rageot, crafts the fruit (which comes from eight of the ten cru villages) into a few dozen wines.

Plenty of evidence that Beaujolais can age for years, even decades.

The Château de Chénas currently produces 500k bottles (83k cases), but has the capacity for nearly three times that figure. One of the reason for the difference? There has been a steady decline in the number of growers that see the co-op as a viable outlet for their fruit. Many have decided to make their own wine while others are being purchased and consolidated by outside entities.

I had plenty of work to do with Didier, including several older vintages. 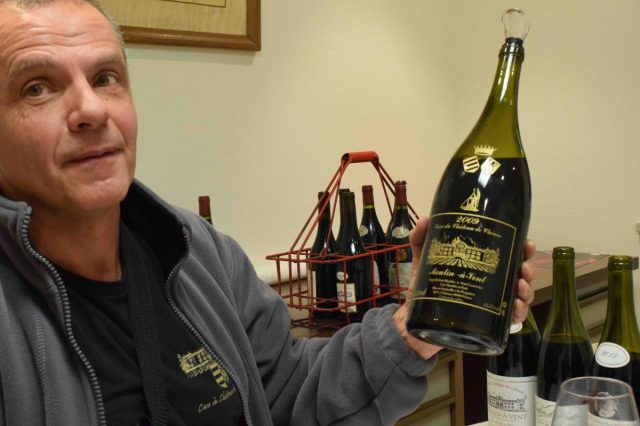 2009 was perhaps the best vintage in the history of Beaujolais and this magnum of Moulin was phenomenal.

After a wonderful stop with Didier, it was back to the hotel for more old vintages and a bit of dinner. 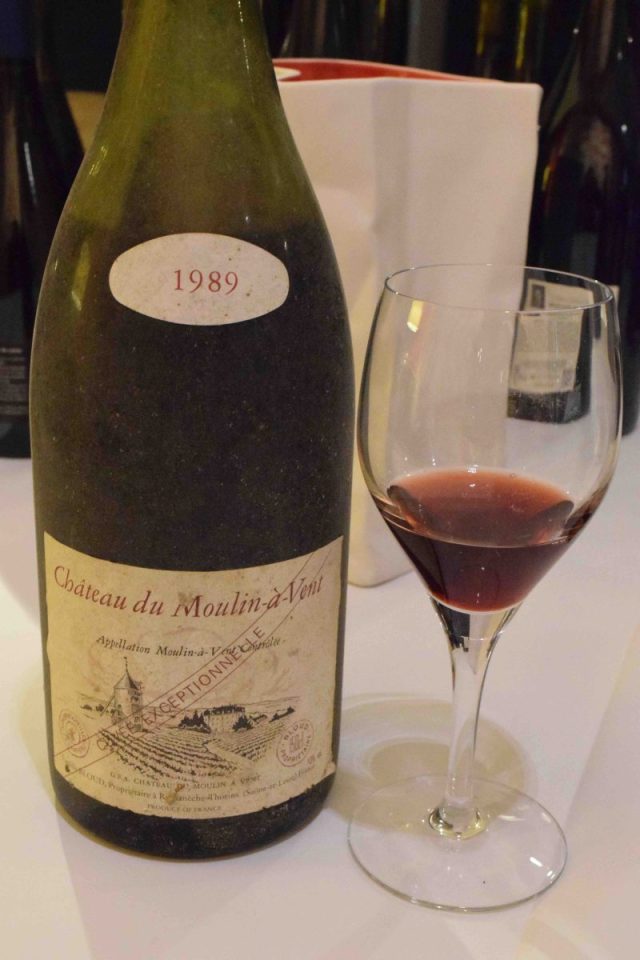 I tried to stay until the end of the dinner, but with my bed just a flight up, and a long flight ahead of me the next day, I turned in fairly early. While I was feeling marginally better in the morning (I chalk that up to tasting close to 130 bottles of Moulin-à-Vent the day before), I was still hurting on the flight–in fact my ears became so blocked I could not hear and it felt as if there were ice picks in them.

After another day or two home, I was out of the proverbial woods and well on my way to “normal.” While my first trip to Moulin-à-Vent was shrouded in misery, I really can’t wait to get back and explore more of the region.

I have been an occasional cycling tour guide in Europe for the past 20 years, visiting most of the wine regions of France. Through this "job" I developed a love for wine and the stories that often accompany the pulling of a cork. I live in Houston with my lovely wife and two wonderful sons.
View all posts by the drunken cyclist →
This entry was posted in Beaujolais, Gamay, Wine. Bookmark the permalink.

1 Response to Recounting the Worst Ten Days in my Life (This Should Be Fun): Part Eight—Home Stretch