My First (but not last) #WWander in Walla Walla

Posted on September 26, 2018 by the drunken cyclist

Next week, the Wine Bloggers Conference (#WBC18) returns to Walla Walla, Washington, having first visited the region in 2010. I was fortunate enough to visit the appellation for the first time just a few weeks ago, ahead of the conference, where I received an incredible overview of the AVA from the fine people at the Walla Walla Wine Alliance.

My intention for the week, upon the suggestion of the aforementioned Alliance, was to spend a few days in Walla Walla, visit the region’s wineries, and ride my bike for an hour or two each day in n area that is purportedly replete with stellar rides and stunning topography. The Wine Alliance has a program called #WWander Walla Walla with ten different itineraries to explore the AVA, each designed by the winemakers themselves.

My response did not take much deliberation: “Sure!”

The night before my trip, which also happened to be a “significant” birthday for my wife, I dusted off my bike carrier and packed up my bike while carefully preparing a (hopefully) special meal for my wife. Both the meal and the packing went surprisingly well, and the following morning I loaded my bike into the car and headed to the airport.

Arriving at the terminal, as I pulled my bike box out of the rear hatch, I had a sinking feeling: I realized that I had forgotten to include my saddle in the box with my carefully packed bicycle.

Normally, that would not be a big deal, particularly since there are two fine bike shops in Walla Walla (Allegro Cyclery and the Bicycle Barn), where I could stop in and pick up a saddle. It was slightly more complicated, however, since the seatpost was also still attached to the saddle. And said seat post, given that I am, according to my brother, “freakishly tall,” needed to be fairly long.

That could prove to be a problem.

Undeterred, my gracious host for the week, Liz Knapke of the Wine Alliance, started filling me in on the Walla Walla story while shuttling me to tastings. She answered all of my questions with aplomb, from the mundane (“How many wineries?” “About 125—it depends on how you define ‘winery.’”) to the historical (“Um, what’s up with the name?” “It’s a town so nice, they named it twice! Actually, it comes from a semi-nomadic Native American tribe that eventually settled in the area. It means ‘land of many waters’, which is a bit confusing, since there is not a ton of water here.”)

The Walla Walla AVA is divided up into five relatively distinct areas: Eastside, Westside, Southside/Oregon (roughly 2/5 of the planted acres in the AVA are in Oregon), Downtown, and the Airport. Over my four days in Walla Walla, I visited at least a couple of wineries in each region (with the exception of the Airport, which is apparently a bit of a warehouse district of wineries).

While each winery certainly identified with their part of town, so to speak, they seemed just as in tune with where they were in the chronological hierarchy of wineries in the region—it seemed that each winemaker would first let me know what “number” winery they were in the appellation (e.g., “We were the 10th bonded winery in Walla Walla.”), starting with the first, Leonetti Cellar (established in 1977).

Since my brain functions much better when it is coping with numbers rather than geography, here are a few of the wineries and wines that stood out on my trip to Walla Walla in order of their founding.

The second oldest winery in the Walla Walla AVA, Woodward Canyon, is located on the Westside of the appellation, right next door to the #3 Walla Walla winery, L’Ecole No. 41. A stop to one necessitates a visit to the other. At Woodward Canyon, I was hosted by Jordan Dunn-Small, the daughter of founders Rick Small and Darcey Fugman-Small, who produced the first vintage of Woodward Canyon back in 1981. Jordan delightfully recounted her youth, growing up in Walla Walla, as we tasted through many of the current offerings.

2017 Woodward Canyon Chardonnay, Washington: Retail $44. A blend from two sites. Nice tree fruit, yellow apple. Nice tart, light oak and only partial malolactic fermentation. Almost Chablis style. Very nice. In what would become a theme for the week, while only 5% of the vineyards in Walla Walla are planted to white grapes, there are some terrific whites made there (although often the fruit comes from the broader Columbia Valley Appellation). Outstanding. 90-92 Points.

Jordan and the Artist Series Cab.

Another Walla Walla stalwart, is also on the Westside: Reininger Winery, founded in 1997. It turns out that Chuck Reininger, owner and winemaker, is also quite a cyclist. However, we did not get the chance to ride as he was busy with harvest and I had been busy trying to get my bike to work (more on that in the next article).

Reininger CPR Red Wine III: Retail $90. Sources the fruit from “everywhere.” Inspired by the solera system where each year, wines from the current vintage are blended with the wine remaining from the previous vintages. This blend has nine different vintages and eight varieties. Chuck takes about 20% of the wine and bottles every year then tops off with new vintage. Nice dark fruit with a bit of oxidation and mocha. Wow. Very nice. Great fruit, incredibly balanced. Really long finish. Ok. Whoa. Outstanding. 92-94 Points.

2013 Reininger Merlot, Walla Walla: Retail $37. 96% Merlot, 4% Cabernet Sauvignon. Perhaps the best Merlot I had all week. Still great fruit, five years out, with black pepper and sage. Rich and weighty with plenty of spice and some chewy tannins. Outstanding. 91-93 Points.

Reininger Desiderata 20: Retail $150. 33% Malbec, 27% Cabernet Sauvignon, 13% Carmenere, 13% Cabernet Franc, 7% Merlot, 7% Petit Verdot from five vintages. Dark fruit of blackberry and plum. Whoa. Mocha and an ounce of black pepper. Subtle initially on the palate, but after a few seconds it really wakes up and brings the power, but in a subtle, reserved way. Great fruit and spice with a killer finish. Whoa. Outstanding. 92-94 Points. 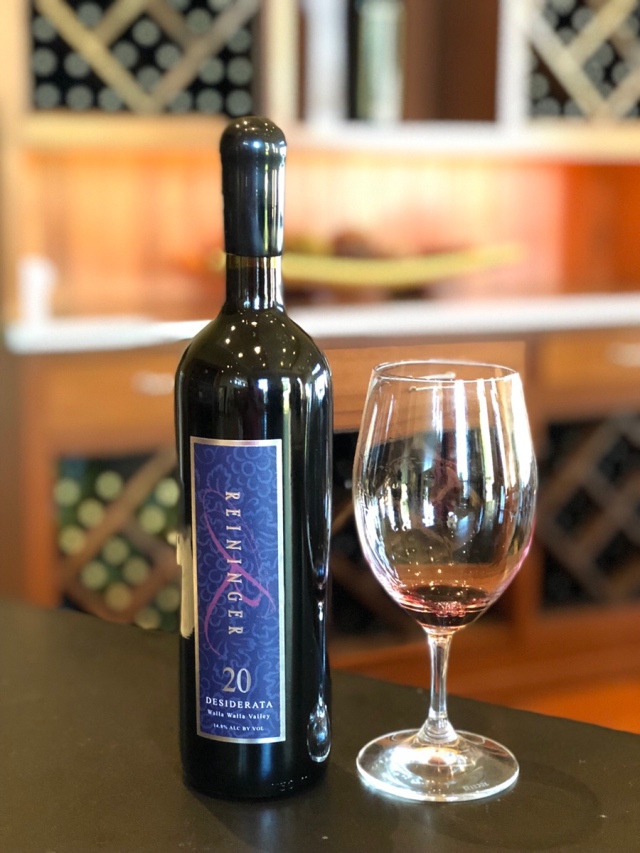 Pepper Ridge Winery, founded in 1998 and located on the Southside of the appellation, is one of the region’s largest growers, with about 600 planted acres, providing fruit for 85 wineries. As a winery, it is fairly small, with a total production of around 6,000 cases, headed by their longtime winemaker Jean-François (J-F) Pellet. The winemaking philosophy is to produce age-worthy wines that pair well with food, not patio pleasers. 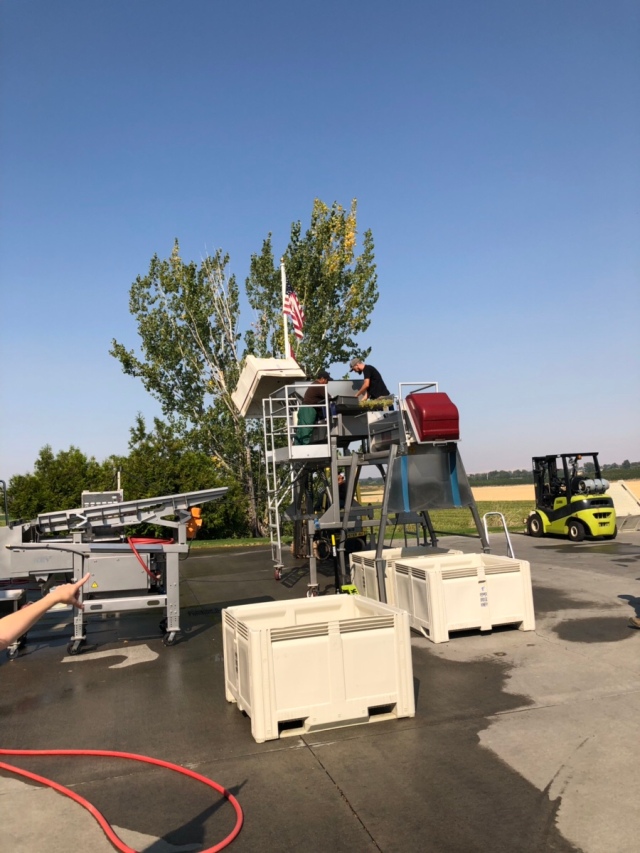 The first grapes of the harvest were coming in as I was there.

2015 Pepper Bridge Trine, Walla Walla: Retail $65. Bordeaux blend (40% Cabernet Franc, 28% Cabernet Sauvignon, 18% Merlot, 10% Malbec, 4% Petit Verdot) that changes with every vintage. The name means “a close-knit group of three” which represents the three families behind the winery. A bit muted but eventually wild cherry on the nose. Shy on the palate as well but this has great balance and a lengthy finish. Very nice. Outstanding. 91-93 Points.

More winery visits and travails with my bike to follow.

I have been an occasional cycling tour guide in Europe for the past 20 years, visiting most of the wine regions of France. Through this "job" I developed a love for wine and the stories that often accompany the pulling of a cork. I live in Houston with my lovely wife and two wonderful sons.
View all posts by the drunken cyclist →
This entry was posted in Cabernet Franc, Cabernet Sauvignon, Carménère, Chardonnay, Malbec, Merlot, Petit Verdot, Syrah, Wine. Bookmark the permalink.