Posted on December 11, 2018 by the drunken cyclist

This past year, I was invited to attend VinItaly, which is the largest convention for Italian wines in the world. It is held every Spring in Verona, Italy, which just might be my favorite Italian city that is not located on Sicily.

A couple of weeks ago, I enumerated my top six reasons to go (or not) to the convention, and I realized that there was another reason that I neglected to include:

When I arrived in Verona, I really did not expect much. I had been told by numerous people that VinItaly was a complete zoo, with people everywhere and barely enough room to breathe. While I would not say that I disdain large groups of people, I really try to avoid them. (It is not that I hate people, or even crowds, per se, but I am a statistician and I know that the odds are pretty good that the bigger the crowd, the better the odds that someone will do something stupid. And I have a real problem with stupidity.)

I’ll let you decide if caressing the right boob of Juliet’s statue for good luck falls under “stupid.”

What makes the occasional run-in with stupidity palatable is that there is an equal (perhaps greater?) chance that one will encounter brilliance. Such was the case on the next to the last day of the convention as I was trying to find a rather small producer that a friend had suggested that I check out.

As I was wandering through the appropriate pavilion (at least I am pretty sure I was in the relative “right” place), I came across a sign for Bruno Paillard. Since it was VinItaly, I assumed that there would only be Italian wines at the convention. Curious to see why there was a sign for one of my favorite champagne houses, I meandered through the crowd and to the bottom of the staircase where there was another sign for Bruno Paillard and an arrow pointing up.

As I started my way up the stairs, I was stopped by what I presume was an Italian, who said something to me in what I presume was Italian. After a perplexing moment, I realized that he was telling me that I needed to wait as it was already too crowded on the upper floor.

Being in the mood for some of the finest bubbles on the planet, I decided to wait while I contemplated the sudden interest in crowd safety being exhibited by this singular Italian (I presume).

Eventually, I was allowed to head up the stairs and to the Paillard table where there were no fewer than a dozen Italians (I presume) crowded around the table vying for a few drops of the golden sparkling elixir. As I tried to muscle my way through the horde (which I abhor), I noticed Alice Paillard in a back room giving a private tasting.

Since it had been the better part of two years since I saw her, I asked the rather imposing Italian (I presume) man behind the counter if he could pass along a word that I said hello (while handing him my card). He dutifully carried out my request and a moment later, the petite, yet lively Alice Paillard emerged from the back room to both greet me and ask if I could return later in the day when she would have a bit more time.

And I am glad I did, for in addition to catching up with Alice, we tasted through the current Bruno Paillard releases. Whoa. We started with the vintage champagnes and Alice noted that the most sought after vintages in champagne are those that are slightly out of balance either high acidity or more fruit or more power. That is perhaps because they are remarkable, out of the ordinary. Such was the case, she felt with the 2006 and 2008 vintages. 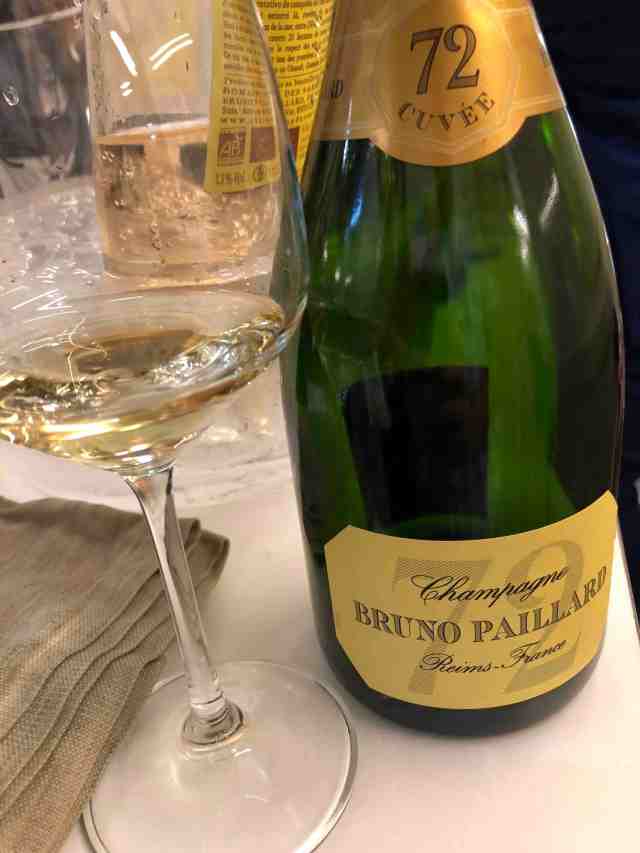 As I was waiting to meet with Alice, I was served some Cuvée 72, which spent 36 months on the lees and another 36 months in the bottle. Fabulous.

2006 Bruno Paillard Blanc de Blancs: Retail $95. 100% Chardonnay. Extra Brut in style (only 5g/l), made with only the first pressing of the grapes and with nine (!) years of aging. Creamy and nutty with a bit of the tropics. Full and rich with nuttiness and pale lemon flavors. Always between 20-22% fermented in oak barrels. Nutty (hazelnut) and brioche that is well done but not yet burnt–a deeper expression of yeastiness. This is perhaps my favorite Blanc de Blancs to date. Whoa. Outstanding. 92-94 Points.

2008 Bruno Paillard Assemblage: Retail $85. 42% Chardonnay, 42% Pinot Noir, 16% Pinot Meunier. Another Extra Brut (5g/l) with another extended aging (8 years sur lies). According to Alice, “when you chose you also renounce–by including the Pinot this year, which was fantastic in 2008, we also admitted that the Chardonnay was not quite as good as in 2006.” Sweet on the nose with touches of cream and baked bread. Tart and long this seems more Blanc de Blancs than an Assemblage, until the Pinots (Noir and Meunier) seem to awaken on the mid-palate, thrusting their heft and backbone into the, until then, delicate wine. Wow. It changes quickly and becomes less tart and more floral and even chocolate. Whoa. Outstanding. 93-95 Points.

2002 Bruno Paillard N.P.U. (Nec Plus Ultra): Retail $200. 50% Pinot Noir, 50% Chardonnay, 100% Grand Cru. Only made in the finest years, this is only the fifth N.P.U. made (the first was in 1990). Released after the 2003, this 2002 spent eleven years in contact with the lees and another three years in bottle after disgorgement (Alice says that disgorgement is akin to surgery, and the wine, like the body, needs to recover). Whoa. Salted Caramel and chocolate. Dried apricot and even fig. Big, and powerful but elegant. This is a fireplace wine. Good friends lots of time to reflect and enjoy. Like a thoroughbred beautiful, elegant, seemingly gentle but plenty of power. Whoa plus. A multi-minute finish. Whoa. Best champagne I have had in a while, and I drink a ton of champagne. Outstanding Plus. 97-99 Points. 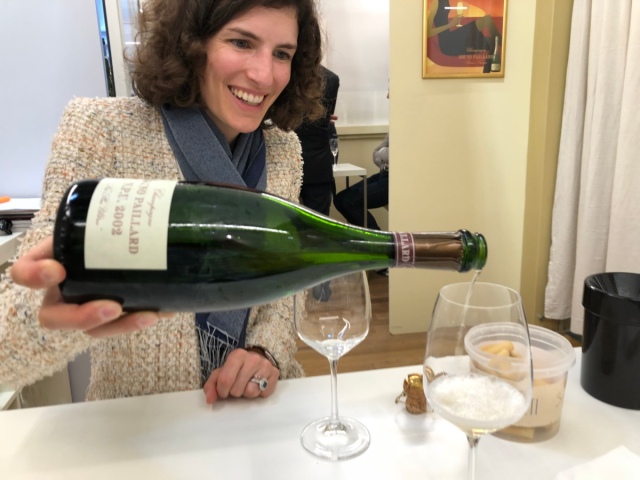 The last wine she poured, was one of those “under the table wines” that she said was only for the few (did I mention that Alice is quite the charmer?). While the Champagne region is justifiably known for its sparkling wines, there is also a bit of still wine produced. Until tasting the next wine, I had only ever seen red Coteaux Champenois wines. This would be my first white.

2013 Bruno Paillard Le Mesnil Coteaux Champenois Blanc: Retail $100. 100% Chardonnay. From perhaps the most famous of all Chardonnay vineyards in Champagne, Le Mesnil,  this was a complete and utter delight (and perhaps further proof that climate change is benefitting the kind people in Champagne, at least for now). What a nose: melon and peach but also with some marzipan. Tart and delightful. The oak is there but slight. Otherwise pure Chardonnay. Outstanding. 92-94 Points.

At the end of the tasting, I sadly bid Alice au revoir, but we vowed to meet up again soon, preferably in Champagne. As I made my way back down the stairs, and back out into the hordes of Italians (I presume), I reflected on the crazy world of wine and marveled how easy it is to come across familiar faces, even in the most unexpected places.

I have been an occasional cycling tour guide in Europe for the past 20 years, visiting most of the wine regions of France. Through this "job" I developed a love for wine and the stories that often accompany the pulling of a cork. I live in Houston with my lovely wife and two wonderful sons.
View all posts by the drunken cyclist →
This entry was posted in Champagne, Chardonnay, Pinot Meunier, Pinot Noir, Wine. Bookmark the permalink.

5 Responses to The Unexpected at VinItaly: Bruno Paillard Champagne?