Hitting the Ground Running with Donnafugata

Posted on December 19, 2018 by the drunken cyclist

Last week, I started chronicling a trip I took to Italy this past summer, which started with a couple of days on what I consider my Italian “home” Sicily.

After meeting Baldo Palermo, the Director of Public Relations at Donnafugata, perhaps the premier Sicilian winery, at the Palermo airport, we drove directly to Marsala on the western coast of Sicily. The town of just over 80, 000 residents is known for the eponymous fortified wine, the ancient salt farms, and as the home of Donnafugata. 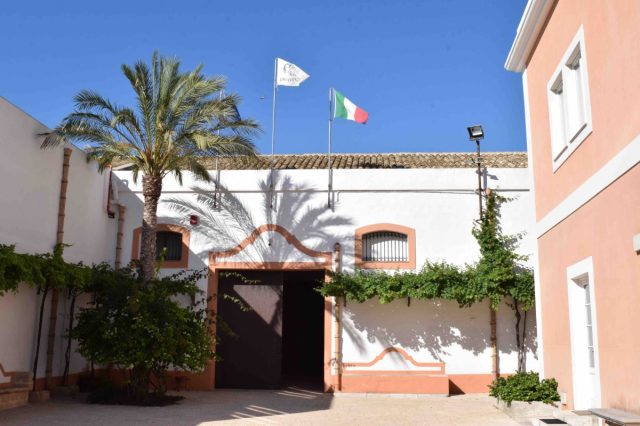 The inner courtyard at Donnafugata.

After a quick nap, Baldo and I headed over to Donnafugata for a rather thorough tasting of their wines. Giacomo Rallo and his winemaker wife, Gabriella Anca, who both come from Marsala producing families, founded Donnafugata in 1983. They realized that the future of winemaking in the region would need to turn away from the traditional fortified wines that had been produced in the region for centuries.

Giacomo and Gabriella were at the forefront of the Sicilian wine renaissance, which stressed the need to produce dry wines with an intense focus on quality. Sadly, Giacomo died suddenly and unexpectedly in 2016, but the company is now headed by Giacomo and Gabriella’s two children: Antonio and Josè.

Antonio and Baldo no doubt discussing my probing and in-depth questions.

The name Donnafugata, which means “woman in flight” (donna in fuga) is taken from the 1958 novel, Il Gattopardo (The Leopard) by Tomasi di Lampedusa, which chronicles life in Sicily during the Risorgimento (the unification of Italy in the 19th Century). The novel, which is the best-selling novel of all-time in Italy, recounts the story of a Sicilian queen who took refuge in the fields that are now Donnafugata’s vineyards. Today, Donnafugata produces  around 2.4 million bottles a year (200,000 cases), 30% of which is exported to mostly German, Switzerland, and the U.S.

Here are the white wines that we tasted that afternoon at the winery:

2017 Donnafugata Anthìlia, Sicilia DOC: Retail $15. A blend dominated by Cattarato, “the” Sicilian white variety. This is both the first wine produced by Donnafugata as well as currently the largest production wine for the winery (850 thousand bottles), which they call “The most enjoyed Donnafugata wine in the world.” Thus, for many this is Donnafugata. The name comes from the local name of the ancient Sicillian city of Entrella, which sat on the top of Rocca, a rock cliff not far from Palermo. Tropical and mineral and quite aromatic. Dry and clean on the palate with lemon and even pear. Very clean and bright. Delightful. Very Good to Outstanding. 88-90 Points.

2017 Donnafugata SurSur Grillo, Sicilia DOC: Retail $12. 100% Grillo, a Sicilian variety which is probably a cross between Zibibbo and Cattarato, it is also the word for “cricket” in Italian. “SurSur” is cricket in classic Arabic, a language that had been spoken on Sicily off and on for centuries. Tropical and exotic fruit with wild flowers and wet rock. Very nice. Very Good to Outstanding. 89-91 Points.

2015 Donnafugata Chiarandià, Contessa Entellina DOC Chardonnay: Retail $25. 100% Chardonnay. Contessa Entellina is one of several sub-DOC on Sicily, located to the southwest of Palermo. After a tank fermentation, about 2/3 is aged in barrique, and the other third in cement both sur lie with batonnage. Bright lemon with a clear oak presence. Oak not as present on the palate. Round but still quite focused with great citrus that is buoyed by the oak. Very nice. Outstanding. 90-92 Points.

At the end of the whites, the matriarch of the family and co-founder of Donnafugata, Gabriella stopped in to say hello. She was joyful and bubbly despite her years, and we briefly talked about families, Texas, and her husband—even though his death was two years prior, it was clear that she was still learning how to carry on without him.

She then mentioned over to Bardo and told me that was one of her students back when she was a teacher (in the early days of the winery she bought school during the week and would tend to the wines on the weekends), and he was always quite smart and talented. He politely, almost apologetically corrected her, saying that while he continually learns from her, she was never his teacher. A bit shocked she quickly added: “maybe it was your sister? I know it was one of you.“

She then asked Bardo if we were going to be heading to Pantelleria, which I learned is a small island off of Sicily (it is actually closer to Tunisia than it is to Sicily. He assured her that we were headed there the following day.

“Oh, you will love it there, it’s beautiful.”

Which turned out to be the understatement of the trip. 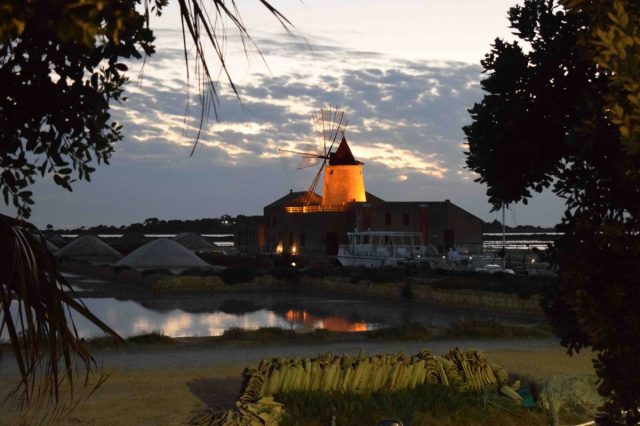 That evening, we dined al fresco adjacent to the ancient salt farm, not far from Marsalla.

6 Responses to Hitting the Ground Running with Donnafugata