Reviving the Allure of Brindisi with Tenute Rubino (Part One)

My flight to Brindisi, Italy this past summer on Ryan Air was memorable for a few reasons. The first was that this was my second flight on the airline and I had therefore become a bit accustomed to traveling in the middle seat—something I thought would never happen. I also was coming to grips that the flight was fairly likely to end in a ball of fire as we dropped out of the sky at some point during the flight.

Ryan Air does not evoke “confidence” to many as they cram 128 people into planes designed to carry 24. Yes, they offer extremely cheap fares, but in order to make up for the savings, they charge for everything else (including an aisle or window seat, which is why I was relegated to the middle), and are constantly on the intercom trying to sell an additional 43.2 items. Perfume, magazines, booze. You name it, it is for sale on the flight.

The only thing that is not for sale is any type of assurance that the pilots are being paid enough to attract people who actually know how to fly (and land) commercial airliners.

On this particular flight on Ryan Air, one of the flight attendants was on the intercom for a solid 73 minutes of the one hour flight babbling in Italian trying to sell some stupid lottery tickets. He had a voice that could shatter glass and he did not seem to care that half of the plane was ready to jump out of the emergency exit at 30,000 feet just to get away from his high-pitched harangue. I was trying to signal that I would buy every last one of the tickets if he would just shut the heck up.

I figured I could wrestle the money away from him during the chaos of the descent while all, including said flight attendant, would have head between knees, praying to a god they had not spoken to for decades.

(My Italian is not great, but I am pretty sure he claimed that there was a better chance of winning a few Euros by buying a ticket than there was of the pilot landing the plane safely, but I can’t be sure—but I figured it was worth a shot.)

Miraculously, to the shock of just about everyone on board, we landed safely in Brindisi, in the heart of the Puglia region, a town that for me has always had a bit of magic to it. I had never visited, but since it was the closest point on the Italian peninsula to many points east, I thought of it as a mystical port town. A window to the world in a way, from where I could reach Corfu, Patras, or the Greek mainland by boat, the way people had traveled between the two lands for millennia.

My trip to Brindisi was sponsored by Tenute Rubino, a leading producer in Puglia. They make a delightful Traditional Method Sparkling Rosé from Susumaniello, a local red grape variety. Fantastico!

In all my travels around Europe during my junior year abroad, I never did board a ferry to or from Brindisi, but it remained a focal point, a Valhalla of sorts, and I continued to hope to make it there one day, and board what I determined would be a magical ferry that would take me across the sea and back to antiquity.

On my many subsequent trips to the continent, the mystique slowly and unconsciously eroded. It descended on my mental list of “must-see” or at least “must-pass-through.” Eventually, as the allure of many hours on a ship in the Adriatic withered away, a trip to Brindisi was supplanted altogether on that wistful “must-see” lineup with the Azores, Cape Town, and the Dalmatian Coast.

We taxied along the runway, and as most on the plane were expressing their thanks to their higher being of choice for just being alive, I was rekindling my long-forgotten love for Brindisi, but I was a bit worried that the town would somehow fall short of the image I had conjured so many years ago.

Would I be ecstatic? Would I be crestfallen? Would I care? It had been so many years since I yearned to at least pass through Brindisi. I had evolved (at least I hope). My foci had shifted countless times. I am a parent. I am old(er). I was no longer that (somewhat) innocent student trying to see the world.

But as I climbed in the car at the airport, headed for the town, I once again I felt like my young adult self, eager to exit the plane and discover a world that I had envisioned so many times.

I was there to meet with Luigi Rubino and his lovely wife Romina Leopardi, owners of Tenute Rubino, one of the leading Apulian producers. 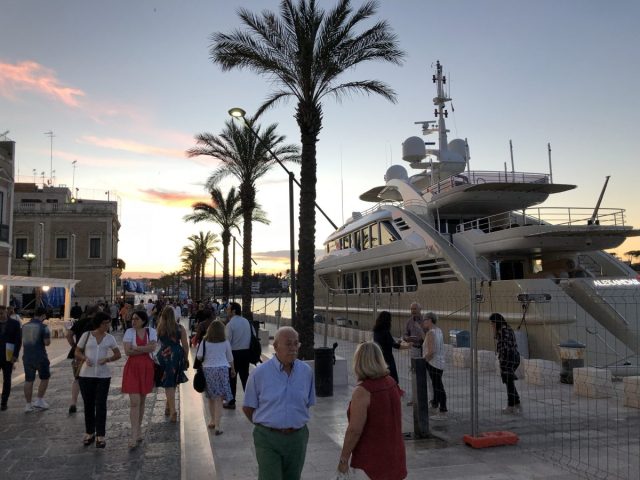 Along the water in Brindisi.

I met the couple at their Bistro, right along the waterfront of the port in Brindisi and quickly learned three things:

I have been an occasional cycling tour guide in Europe for the past 20 years, visiting most of the wine regions of France. Through this "job" I developed a love for wine and the stories that often accompany the pulling of a cork. I live in Houston with my lovely wife and two wonderful sons.
View all posts by the drunken cyclist →
This entry was posted in Susumaniello, Wine. Bookmark the permalink.