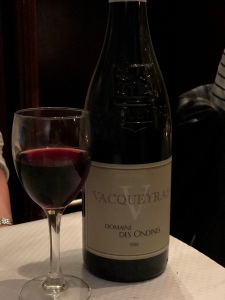 2016 Domaine des Ondines Vacqueyras: Restaurant Price: 35€. Mostly Grenache, likely with a healthy dose of Syrah. I spent a fair amount of time with my good buddy, Google, trying to locate this producer. While there is plenty (relatively) available for the “Domaine les Odines, this bottle is clearly marked “Domaine des Odines.” It does not seem like all that big of a deal, but the O.C.D. in me thought it was, and I was determined to find it. I didn’t. Oh well.

I have stayed in Paris countless times but this was my first time in the Marais. I was at a rather non-descript restaurant and had to choose a wine. Debating between red and white, beef or fish, I decided that I was missing Texas (did I just say that?) and settled on steak frites. So that meant red. The choices were, well, limited. I had no desire to fork out a bunch of Euro for a wine with which I was not familiar, so my eyes were fixated on the bottom half of the wine list. I have always had (OK, almost always) good luck with Vacqueryas, one of the satellite appellations of CdP. Not always as revered as Gigondas, but a good little southern Rhône blend. So I was confident. Well. This exceeded my expectations. By a lot. Dark in the (tiny little) glass with cassis and plum. The palate is spicy and fruity with impressive weight and a bit of grip on the finish. Yes. This a full-blown Whoa. A wine that I would actually search out, buy, and ditch a pair of jeans so I could fit it in my suitcase. I guess that will have to wait until my next trip to France since it is a ghost here in the US. Outstanding. 93-95 Points. 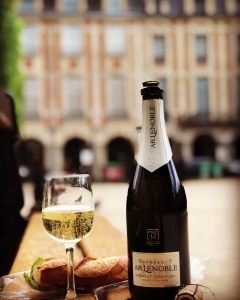 NV A. R. Lenoble Champagne Grand Cru Blanc de Blancs: Retail: 36€. 100% Chardonnay. This wine is first aged in magnums and then transferred by hand. 5 million bottles. That’s a lot of work. Normally, I shy away from Blanc de Blancs but I figured I was having a sandwich in the place des Vosges with a glass that I lifted from an unsuspecting bar just off the square. Nutty with a hint of citrus on the nose and quite yeasty and tart on the palate. Delicious. My only gripe? The sparkle fizzes out a bit too soon in the glass. Is that due to the transfer from magnum? Perhaps. But I don’t care. Excellent. 91-93 Points. 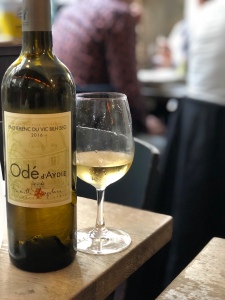 2016 Odé d’Aydie Pacherenc du Vic Bilh Sec: Restaurant Price: 28€. 60% Petit Manseng, 40% Gros Manseng. I have had a few dry Pacherencs in my day, but the list of secs is exceedingly short (I am pretty sure this is the first). From the southwest of France and far from the panoply of “usual” wine grapes, this is earthy for a white, with some tree fruit and minerals coming out of the golden liquid. It was my last moment in the Marais at a relatively tiny restaurant with an interesting menu and a limited, but creative wine list. I opted for this to pair with my salmon salad and it was glorious. The French have a word, “corsé” which describes this well as it has a bit of spirit, heft, and gravitas. Excellent. 90-92 Points.

NV Philipponnat Royal Réserve Non-Dosé Champagne: 65% Pinot Noir, 30% Chardonnay, 5% Pinot Meunier.  I had just arrived in Reims on a national holiday and the only place open was the Monoprix on the Place d’Erlon. I was excited to see this, from a reputable producer and Non-Dosé (no sugar added in the process). Green apple and citrus with just a hint of yeast on the nose. A fine sparkle and quite dry, allowing that green apple fruit to shine on the palate as well. Not the best Champers I’ve had, but it was quite nice. Very Good to Excellent, 88-90 Points.

WINE OF THE WEEK: Trying to chose a Wine of the Week while in France is akin to trying to select a favorite child: it’s a moving target and subject to all kinds of subjectivity. There is also the added difficulty of drinking wine in perhaps the most storied country for such an activity; everything French wine seems to taste better in France. At the end of the day (or at least at the end of two weeks), though, it is time to put on one’s big-boy pants and make a decision. As a bit of a surprise, I opted for the 2016 Domaine des Ondines Vacqueyras as this week’s Wine of the Week for no other reason than it was such a surprise. I spent most of my dinner trying to delegitimize my assertion, but it held. To the very last drop.

I have been an occasional cycling tour guide in Europe for the past 20 years, visiting most of the wine regions of France. Through this "job" I developed a love for wine and the stories that often accompany the pulling of a cork. I live in Houston with my lovely wife and two wonderful sons.
View all posts by the drunken cyclist →
This entry was posted in Chardonnay, Gros Manseng, Petit Manseng. Bookmark the permalink.