What We Have Been Drinking in Rome

I am currently on vacation with my family and we spent the better part of last week in Rome. Since it was the first time in the Eternal City for all of us, we took in a lot of the tourist attractions, but we still had a bit of time to do as the Romans do and drink a little bit of wine. Here were some of the wines we tried:

Ruinello Oltrepò Pavese Vino Spumante Brut Pinot Nero Rosé: 20€ (restaurant). 100% Pinot Nero. We arrived earlier that day in Rome after a rather trying two days of travel. It was only seven o’clock but we were dead tired and nowhere close to hungry, but we were determined to stay up at least a bit longer and power through something resembling dinner. Tired of walking in the 95-degree heat, we opted for an aperitivo before finding a restaurant. We walked for longer than any of us would have liked before seeing a cute place whose terrace was packed with Spritz-drinking, Marlboro-smoking Italians, gesticulating at full speed. It turned out to be the same place where we had lunch a scant five hours prior, a mere hundred meters from our appartment (I never said I was all that adept at navigation). Instead of ordering a half-dozen Spritzes (at 7€ a pop) to combat the heat, we settled on this Pinot Nero Spumante, made using the Charmat method (as used in Prosecco). Light, flavorful, and mineral with just a hint of color. It wasn’t the best bottle of bubbles I’ve had from Italy, but boy did it hit the spot. Very Good. 87-89 Points.

Rotari Brut, Trento DOC: Retail: 8€50 (grocery store). 100% Chardonnay. Rotari will always hold a special place for me among not just Italian bubbles, but all sparkling wines  (yes, including Champagne). Rotari is made by the Mezzacorona cooperative in Trento, who hosted my first European press trip. While that is certainly significant, what is more telling is that I have maintained a relationship with many of the people at the company and whenever our paths cross, laughs are shared and corks are popped. Thus, when I saw this in our local grocery store in Rome for under 10€ (I told them on my visit and at each subsequent encounter that they do not charge enough for their wines), it was the definition of a “no-brainer.” Citrusy and nutty with bright flavors, a vibrant (but short of intense) sparkle, and a lingering finish. 8€50? That’s a stupid price for this wine. Sell me a case. Or seven. Very Good to Excellent. 89-91 Points. 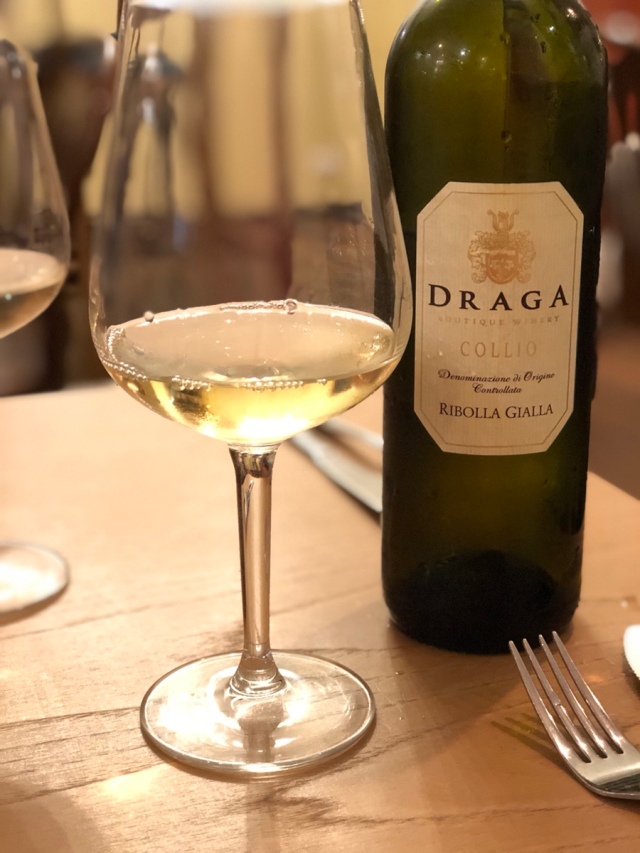 2018 Draga Ribolla Gialla Collio DOC: 20€ (restaurant). 100% Ribolla Gialla. I did a bit of research online and found the “perfect” wine bar/resto which was a brisk 20-minute walk away. Despite the exceedingly hot temperatures, I convinced the family to make the trek. Well, a funny thing happened on the way to the forum: the place was packed with at least three dozen folk, hanging outside the joint, many with glass in hand. While not promising, I felt the need to inquire. The maître d’ laughed. “At least an hour. All of these people are waiting for a table.” And it was already 9:00. Staring a hard fail in the face, I asked for a recommendation. He suggested a local place just down the street, which was perfect since my crew was fading fast. It was not crowded (never a good sign, but it meant we could be seated immediately), but the menu looked good and I was immediately impressed with the wine list. While not necessarily excessive, the list was broad with many regions represented. When my first choice was not available, I opted for this Ribolla Gialla from Collio. Tartly citric on the nose with a bit of nuttiness and wet rock. The palate is tart yet subtle, with impressive fruit and a lingering finish. Not bad for the second choice at a second choice. Very Good to Excellent. 88-90 Points.

2018 Santi Valdobbiadene Prosecco Superiore Dry DOCG: 20€ (restaurant). 100% Glera. After a rather arduous trip to even make it Rome, we were still a bit out of sorts for the first couple of days in the Italian capital. Exasperated, tired, and needing some peace and quiet, we sent the boys on their first solo quest: gelato (had we known that this story was about to play out less than a mile from where we stayed, we might not have been so liberal with their freedom). Since it was the time for aperitivo, we took the opportunity to head up the street a bit and ordered a bottle of Prosecco. As we waited for the bottle, we saw the boys strolling along with their fragola and amarena gelati, headed our way. They arrived in synch with the waiter and our moment of sanity was over. This bottle was the obvious choice since it was the only DOCG Prosecco on the list, and usually much higher in quality than DOC. Tart and lemon-limey on the nose with a touch of hazelnut and spry and lively on the palate with great acidity and hints of lemon. After a few sips, we realized that it would taste even better accompanied by serenity. We were right; this is lovely and even better once we sent the kids back to the apartment. Very Good to Excellent. 88-90 Points.

I have been an occasional cycling tour guide in Europe for the past 20 years, visiting most of the wine regions of France. Through this "job" I developed a love for wine and the stories that often accompany the pulling of a cork. I live in Houston with my lovely wife and two wonderful sons.
View all posts by the drunken cyclist →
This entry was posted in Chardonnay, Glera, Pinot Nero, Ribolla Gialla, Wine. Bookmark the permalink.

4 Responses to What We Have Been Drinking in Rome