Posted on November 11, 2019 by the drunken cyclist

2009 Argyle Pinot Noir Spirithouse, Dundee Hills, OR: Retail: $65. Nearly a year out from the last bottle of this wine whose top I have twisted off, and not much has changed–still dark-ish with a translucent backbone, and aromas of black cherry and just a touch of anise. I don’t know how many times I have stated in this spot that I am a big fan of Argyle. Sure, they are fairly big, and certainly there have been a few changes at the winery over the course of the last decade-ish, but I firmly believe this is a beautiful wine. Rich-ish, full-ish, and delish-ish, even a decade out, this is wonderful. Excellent to Outstanding. 92-94 Points.

2010 Benovia Pinot Noir Sonoma Coast, CA: Retail $50. As I normally do, when I sat at my computer, glass in hand, to write this note, I peeked at those notes already posted for this wine. I noticed immediately the last note that I typed out for this lovely Pinot. It was written not quite a year ago shortly after I had suffered my worst defeat as a high school basketball coach. I hate to admit it, but I have suffered quite a few losses over the years, but most of them were in my first year at the two schools where I was employed as the varsity coach. Subsequent years at those schools were considerably better, I must offer, as I like to think that I righted the ship, so to speak (after losing records in those first years, the second-year [and beyond] teams all won championships). My current position is different in many ways. First, I am not the “head guy” I am but the Junior Varsity coach. Second, I am at a school that does not really value basketball. At. All. And third, my son is involved in the program, which is at best “interesting.” I did not suffer a defeat tonight, but it is the eve of this season’s first game. And while I have hope that we will continue to improve (one win the first year, four wins last year), I know that we will get our lunch served to us in a rather ignominious fashion–if we lose by less than 50, I will be happy. I grabbed this wine randomly, not recalling its place in my coaching career and while tomorrow could be ugly, this wine is glorious: luscious dark berry fruit, great acidity, just the right amount of wood, and a lengthy, tasty finish. I will try to remember this moment as the opponent is running up the score mercilessly and my team is utterly oblivious to the humiliation. Excellent. 92-94 Points.

2007 Clos Pepe Estate Pinot Noir, Sta Rita Hills, CA: Retail $60. It has been a couple of years since I have tried this wine and I consider that a tragedy. Looking at my notes, I also realize that this wine has improved, by a lot. Whoa. Black cherry, earth, tartness, and a hint of creaminess, whoa. The palate is delightful: bright, dark cherry fruit, earthy forest floor, a touch spicy, and, frankly, delectable. Whoa. The finish lasts for minutes, and well, whoa. Excellent. 92-94 Points.

NV Antoine Derigny Champagne Grand Cru Brut, France: Retail $65. 100% Chardonnay. I bought four bottles of this wine from Last Bottle at the beginning of 2019 and the first bottle I tried was stellar. This is still Excellent, but it is not quite as good as I remember it. Mostly yeasty on the nose, with some citrus and salinity. Quite dry and even austere on the palate, this would no doubt benefit from some food: Epoisses cheese? Fettuccine Alfredo?  Very Good to Excellent. 89-91 Points.

2009 Littorai Chardonnay Charles Heintz Vineyard, Sonoma Coast, CA: Retail $75. Whoa. Fairly dark in the glass even for a wine that is a decade-old. That is the only aspect of the wine, though, that seems “old” in any way. the nose is a vanilla-laced, delicately oaky, baked lemon curd mélange of goodness, nay, greatness. Whoa. The nose, though, is only a precursor to the palate, which is amazing: balanced, rich, tart, intense. This is the best Chardonnay I have had in quite a while, maybe a decade? Whoa. Outstanding Plus. 96-98 Points. 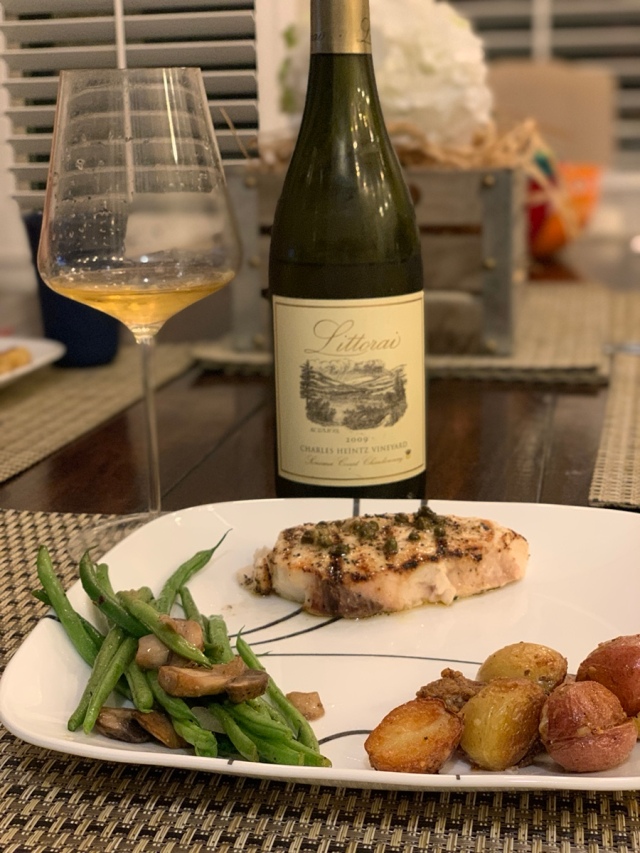 WINE OF THE WEEK: Looking back over the week, this was a particularly good week when it came to raiding the cellar. In my book, any week that you open a Grand Cru Champagne, you are already ahead of the curve. We also popped three stellar Pinots from three distinct appellations, and it would be difficult to choose a “favorite” among the three. Good thing I do not have to as the Wine of the Week was shockingly apparent. As a rule, I try not to hurl around too many superlatives since opinions are, well, relative. Thus, when I wrote that the 2009 Littorai Chardonnay Charles Heintz Vineyard was “the best Chardonnay I have had in … maybe a decade” I realized that I was violating one of my more strictly held tenets. The wine was no doubt fabulous, but the best Chardonnay I have had this decade? As my wife can attest, my memory is not stellar, so the claim is likely specious at best, but there is little doubt that it was the best wine we drank this week.

I have been an occasional cycling tour guide in Europe for the past 20 years, visiting most of the wine regions of France. Through this "job" I developed a love for wine and the stories that often accompany the pulling of a cork. I live in Houston with my lovely wife and two wonderful sons.
View all posts by the drunken cyclist →
This entry was posted in Champagne, Chardonnay, Pinot Noir. Bookmark the permalink.