Posted on January 6, 2020 by the drunken cyclist

2008 Amelle Zinfandel Buck Hill Sonoma County, CA: Retail $25. I have had more of this wine than perhaps any other (the NV Argyle Brut and NV Mailly Grand Cru come close) and now, after this bottle, we are down to the last four. It will be sad when we get there as this is still stellar. Dark and a bit stewed in the glass, this was really the first bottle of this wine I’ve had that is starting to show its age. The palate, though, is fruity, lively, and delectable–the nose might be a bit tired, but the palate is gangbusters. Really close to a Whoa (and it would be if not for the [slightly] stewed nose). Excellent. 91-93 Points.

2012 Clos Pepe Estate Pinot Noir, Sta Rita Hills, CA: Retail $50. Another Christmas and another Clos Pepe consumed. This might be turning into a tradition. Sadly, this winery closed its doors for good a few years ago, but happily, I bought a bunch of wine before it did. Thus, I have several more bottles of this beauty waiting patiently for me in the cellar. Great cherry fruit, eucalyptus, and that Sta Rita Hills gravitas which Wes Hagen (winemaker) was pivotal to bring into prominence. The palate is lovely: great fruit, earth, tartness. Yowza. And a Whoa. Excellent to Outstanding. 92-94 Points.

2009 Henri Bourgeois Sancerre La Bourgeoise, Loire Valley, France: Retail $30. 100% Sauvignon Blanc. I bought three of these wines back in 2012 at the winery as we were passing through the region on our way down to the Dordogne Valley for a week. Oh my goodness. Pineapple and peach with off the charts minerality, this is a wine that sings from the moment the cork pops out of the bottle. The palate is simply gorgeous: subtle fruit (that tropical, tree fruit goodness), still bracing acidity, and a finish that is fruity, lengthy, and has off the charts minerality. A bit smokier than the first two bottles, but this is amazing. Whoa.  Excellent. 92-94 Points.

2006 Louis Latour Chassagne-Montrachet 1er Cru Les Caillerets, France: Retail $100. 100% Chardonnay. I bought three bottles of this wine from WTSO six years ago and this is the second bottle we have tried. The first was clearly stellar, as was this (although an ever so slight step behind). The fruit is mostly gone, leaving mostly nutty aromas on the nose, but there are oodles of secondary flavors: a bit of vanilla, subtle oak, and just a hint of dried peach. Whoa. Excellent to Outstanding. 92-94 Points.

2011 Gary Farrell Zinfandel Bradford Mountain Vineyard, CA: Retail $45. I actually bought this wine on a visit to the winery back in 2014, at a time when my nascent wine blog was still not garnering much traction. I have always been impressed with Gary Farrell Zins as they seem to exhibit both power and finesse. That certainly is the case here as there are oodles of dark fruit (blackberry, cassis) on the nose and plenty of verve on the palate: tart, fruity, earthy. Close to a Whoa. Excellent. 91-93 Points.

2007 Domaines Schlumberger Riesling Kessler, Alsace, France: Retail $45. We had people visiting for the holidays and I was thus sleep-deprived and lacking quality alone time. When that happens, I like to return to a happy place. Usually, that is Champagne, but tonight I opted for my second home: Alsace. Dark, not gold but more orange with lanolin, petrol, and a touch of citrus. On the palate, there are certainly signs of oxidation, but plenty, plenty of acidity, lanolin, and so much verve. Whoa. Yes, this is a bit outside of the mainstream, but whoa. Excellent. 92-94 Points. 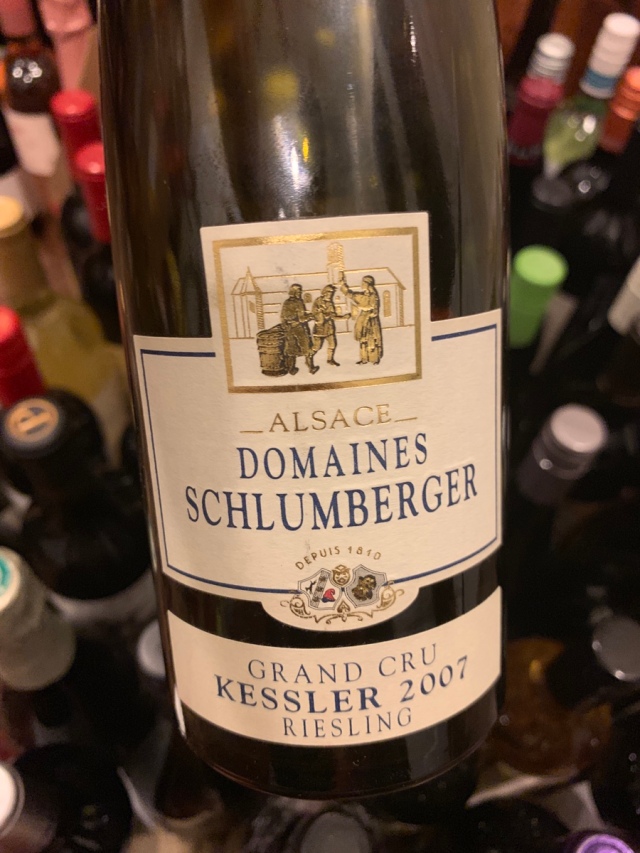 WINE OF THE WEEK: Five out of the six wines we consumed this week have already been Wine of the Week (WotW), so I did not have to worry all that much about getting a photo for today (which is not always the case). This week it really came down to one of three wines, all French and all at risk of being past their prime drinking window. The first was the 2009 Neri Bourgeois Sancerre, a lovely wine, which has already been the WotW twice, so I eliminated it. That left the 2006 Louis Latour Chassagne-Montrachet 1er Cru Les Caillerets and the 2007 Domaines Schlumberger Riesling Kessler. In the end, I opted for the latter for this week’s honors. Why? I guess since it reminded me of my “second home” (I studied for a time in Alsace) and the fact that my judgment of the Latour could have been affected by the overwhelming relief that this particular bottle had not gone bad like far too many before it.

I have been an occasional cycling tour guide in Europe for the past 20 years, visiting most of the wine regions of France. Through this "job" I developed a love for wine and the stories that often accompany the pulling of a cork. I live in Houston with my lovely wife and two wonderful sons.
View all posts by the drunken cyclist →
This entry was posted in Chardonnay, Pinot Noir, Riesling, Sauvignon Blanc, Zinfandel. Bookmark the permalink.