NV Bollinger Champagne Special Cuvée Brut, France: Retail $60. A while ago I swore my allegiance to Gosset Grande Reserve as my preferred non-vintage Brut (assuming that we leave Krug out of the equation). Shortly thereafter, I added Mailly Grand Cru Brut as my “house champagne (as it was more affordable than Gosset, and almost as tasty). Yet always in the back of my thoughts lingered Bollinger: ubiquitous, certainly, but also one of the top Bruts albeit from a larger, corporately owned entity. Bolly still uses some oak aging for most of their wines, and the commitment to excellence traces back to Lady Bollinger herself. At $50 retail here in Houston (and often up to 20% off), this might soon supplant one of my faves. When? That will require considerably more research. Yeasty pear and peach on the nose with brilliant tartness and sparkle on the palate. This is decadent yet refined, fruity yet yeasty. In short, it has all the contrasts that great champagne must. Bravo. Excellent. 91-93 Points.

2002 Collard-Chardelle Champagne Saveurs d’Antan, France: Retail $100. I bought these at the winery back in 2013 after a delightful visit with Daniel Collard. I have been jones-ing to open one ever since, but I have resisted. His wines are all aged in oak and, as such, can likely benefit from some additional aging. I was right: I rated this wine at the time of purchase at 94-96 Points, but it has become even more graceful and intense. Decidedly golden with a slight but fervent sparkle, there are luscious aromas of sherried apple and peach, well-done brioche, and subtle oak. Whoa. The palate is perhaps more intense; tart apple, fresh baguette, intense caramel, and a whole lot of Whoa. I am not sure how many champagnes I have tried are better than this one, but that list is quite short. And this will only get better. Two more bottles. Extraordinary. 96-98 Points.

1996 De Venoge Louis XV Champagne, France: From magnum. Retail $375 (magnum). 50% Pinot Noir, 50% Chardonnay. Dear friends were over and said they wanted to go buy some champagne. I nearly passed out from rolling my eyes: at last count I have 300 bottles of bubbles. They insisted and came home with this. They can insist all they like. A slight sigh upon opening led to a golden elixir with just a slight sparkle. Delicious freshly baked brioche, lemon curd, and just a hint of nuttiness. On the palate, the sparkle is certainly slight, but no matter, this is baller. Slightly sherried, but intense fruit and incredibly yeasty. Whoa. The finish lasts for minutes. Whoa. 95.  Outstanding. 94-96 Points.

2004 Domaine Bernard Morey et Fils Beaune 1er Cru Grèves, Burgundy, France: Retail $80. 100% Pinot Noir. I have had these bottles for a while (I bought them back in 2004) and the first four were rather tasty. This one? Not so much as it was badly corked. Flawed.

2016 Serge & Bruno Sourdais Chinon Domaine de la Haute Olive Vieilles Vignes, Loire Valley, France: Retail $20. 100% Cabernet Franc. Having led dozens of bike trips through the Loire Valley, I have an affinity for the region and for its wines. Above the rest, perhaps, are those from the medieval town of Chinon. So much history are associated with its cobble-stoned streets and it is home to one of my favorite restaurants in France where I have certainly done my part to support the local wine industry. I picked this up from Wines Til Sold Out and while not mind-blowing, it certainly helped me to recall the days spent in the fine town. Fairly dark in the glass with dark and red fruit, vanilla, earth, and is actually quite lovely. The palate follows a similar pattern: good fruit, high acidity, definitely old world in orientation, this is on the austere side of Chinon, but that is just fine by me. Very Good to Excellent. 88-90 Points. 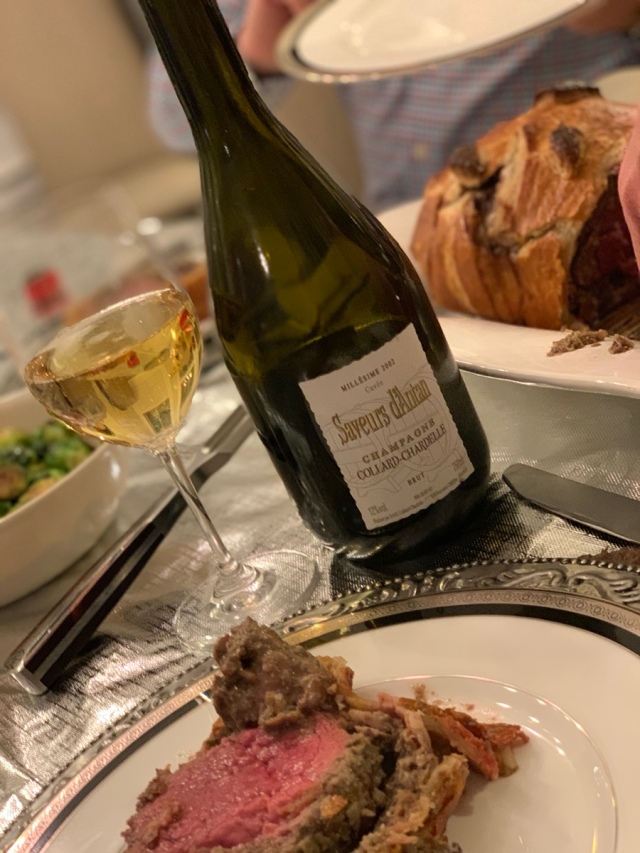 WINE OF THE WEEK: I am not much of a New Year’s Eve reveler, but as you may have surmised, I do like to partake in the tradition of downing rather copious amounts of champagne at the start of the year (I actually drink a ton of champagne all year-round, but that is irrelevant for the purpose of this discussion). And this year, we had a few doozies. The first was one of my favorite “standards” the Bollinger Special Cuvée, which is always stellar. The second was a complete surprise, a De Venoge Louis XV from 1996, no less. It was fantastic. The Wine of the Week, though, was the wine we popped immediately after that delightful magnum, a wine that I picked up at the winery a few years ago, the 2002 Collard-Chardelle Champagne Saveurs d’Antan.

I have been an occasional cycling tour guide in Europe for the past 20 years, visiting most of the wine regions of France. Through this "job" I developed a love for wine and the stories that often accompany the pulling of a cork. I live in Houston with my lovely wife and two wonderful sons.
View all posts by the drunken cyclist →
This entry was posted in Champagne, Chardonnay, Pinot Noir. Bookmark the permalink.