I CAN Do This

It would be difficult to enumerate all of the changes that my family has gone through over the last few weeks: the kids are at home but “at school” online, my wife is working crazy hours and even though she would never see a COVID patient, she is a physician at the largest pediatric hospital in the country and well…

As for me, there has probably been less change but change nonetheless: I still sit at the keyboard struggling to put together clever sentences that hopefully contain at least a modicum of meaning, but I no longer have the occasional three-course lunch or dinner with a visiting winemaker and all the travel I had planned has been either postponed or cancelled.

The other “big” change? I no longer go to the H.E.B. (our local grocery store) on a daily basis. Sure, I still go, but now it is once or twice a week, at the most. And when I do go, I am buying food for multiple days at a time, which is scary since thinking ahead has never been a strong suit of mine.

My happy place. From myspringbranch.com

What it also means is that space in the refrigerator is at a premium–there is just no room in the fridge. We are not hoarding, it is possible that we will eat 18 (and a half) dozen eggs and 13 gallons of milk over the next few weeks. It’s possible. In a desperate search for additional cubic inches, I decided to see what was actually in the energy-sucking beast.

Low and behold, I found these: 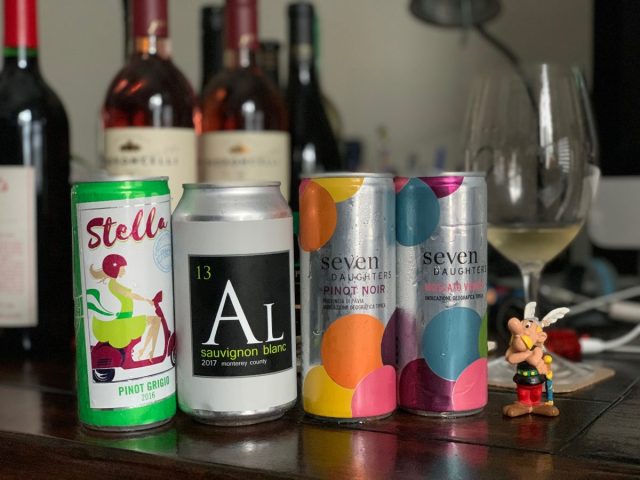 Four cans of wine that I was sent at least two years ago. In my defense, I was sent multiple cans of each wine, tasted one and, well, completely forgot about these.

So yesterday, I decided not only would I remove them from the fridge (thus clearing space for at least a half a gallon of milk), I would also open and taste these bad boys. Further, as a sort of penance, I vowed not to spit the wine out as I often do during tastings. No, I was going to swallow. I figured if I were going to die from the virus, the wine wouldn’t make that any worse (notice: I did not say I was going to drink the whole can, I was simply going to swallow what I put in my mouth–I might be stupid, but I am not crazy).

2016 Stella Pinot Grigio Terre Siciliane IGT, Italy: Retail $5/250ml can. This was the first one I was going to open, and it is also the one that has likely been in the fridge the longest. I’m guessing it has been in there for about as long as Trump has been president: too long (if you are not a Trump supporter, you’re welcome, if you do agree with the president, well, bless your heart!). I tried to find my original review of this wine (I am 99% sure I wrote one), but after twenty minutes of looking, I couldn’t find it. I’m pretty sure that is a fairly bad sign. Nonetheless, here goes. A bit funky on the nose (but who wouldn’t be after three (?) years in the fridge?) with maybe a bit of lemon and a touch of lime. (Who am I kidding? The nose is scaring the crap out of me.) The palate is, well, not bad. That does not mean it is that good, but there was a bit of fruit, some acidity, but not a whole lot of anything else. I would still serve this to my brother, but he’s kind of an idiot.

Next up was the can for which I had the highest hope: the 2017 Wrath Wines AL Sauvignon Blanc. Why? Well, I have tried many a wine from Wrath and they all have been at least fairly good. Also, I really liked this can the first go-around (but that was two years ago). Here is what I wrote then:

2017 Wrath Wines AL Sauvignon Blanc Monterey County: Retail $7.50 per 375ml can sold in four-packs. Intense tropical fruit (mango, guava, pineapple) rushes out of the can and onto the palate with fantastic acidity and a chalky, mineral finish. This is really a well-done wine, but I have a bit of a problem with it–I am not a huge Sauvignon Blanc fan. I guess I should not admit that since it reveals a clear bias of mine, but we all have biases. Having said that, I return to the fact that this really is a nice wine, and I would happily suggest this four-pack for your next trip to the pool. Or beach. Or a high school parking lot. OK, maybe not that last one. Very Good to Outstanding. 89-91 Points. 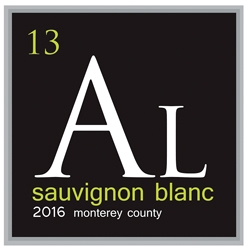 Here goes: Really light in the glass and a bit cloudy, but that dissipated fairly quickly. The nose? I have to say, pretty darned inviting. This time I am getting more stone fruit–mostly peach–but after a bit of swirling, those tropical notes come back as well. I might even call this “lovely.” The palate? Did not age quite so well: a bit disjointed and now flabby, gone is that acidity (for the most part) and minerality. Meh. Whom would I foist this upon? That’s a good question. An annoying neighbor who comes over to tell you you “really should mow your lawn more often.”

Moving right along, I have two cans from Seven Daughters, a Pinot Noir and a Moscato Veneto. Here are the respective notes from two years ago:

Seven Daughters Moscato Veneto IGT: Retail $14/4x250ml. Tropical fruit and honey accompany the bubbles to the top. Sweet and fruity on the palate but far short of cloying, this might be the choice for a backyard BBQ, particularly if there is a bit of spice involved. Very Good. 87-89 Points.

I must have already consumed the other can of rosé as it was nowhere in the fridge.

Seven Daughters Pinot Noir Provincia di Pavia IGT: Retail $14/4x250ml. Call me more of a traditionalist, but of the three Seven Daughters, this was the most difficult conceptually. Pinot from a can? I have said before that it is tough to make a solid Pinot under $30. While this is no blockbuster, it is surprisingly solid. With dark cherry fruit and acidity, this would do well with roast chicken or even pork. By the pool? A bit tougher sell. Very Good. 86-88 Points.

Here goes: The Moscato is still rather frothy on the pour, but fairly funky on the nose. Let me rephrase that: it is really funky, but that started to blow off a bit as it rested in the glass, and eventually, that sweetness started to come through. On the palate, this is still quite tasty (all that sugar sure can mask a few issues). My mother-in-law would absolutely murder a can of this in no time (it helps that it is a 250 ml and a mere 7.5% ABV). In fact, I might just have to finish this can myself. As for the Pinot? I braced myself as this was the can I feared the most. First, I didn’t love it two years ago–it was OK (which you should read with a general drop in tone as the second letter trails off), but that is never an endorsement for any product (or for a first date, for that matter). Also, it’s Pinot, my preferred red variety, and, well, it has been forgotten in a refrigerator for close to 800 freaking days. Yikes.

The nose? Actually quite agreeable with cranberry, dark cherry, and even some spice. OK (this time, the “K” rises a bit in tone and a brief smile tries to escape). The palate follows right along with the nose–this is actually pretty decent! Another sip. Yup, this is actually, dare I say, better this go around?

Lessons learned? While the only red seems to have gotten (at least) slightly better, all three whites were decidedly worse (the sole exception, perhaps, was the Moscato, but there is a ton of sugar there) so aging wines in cans is probably not a good idea. Although if you do happen to forget about a can or two in the back of the fridge, give your brother a call, even though he is a bit dim-witted.

I have been an occasional cycling tour guide in Europe for the past 20 years, visiting most of the wine regions of France. Through this "job" I developed a love for wine and the stories that often accompany the pulling of a cork. I live in Houston with my lovely wife and two wonderful sons.
View all posts by the drunken cyclist →
This entry was posted in Moscato, Pinot Grigio, Pinot Noir, Sauvignon Blanc, Wine. Bookmark the permalink.

5 Responses to I CAN Do This