For most of my youth, classmates would utter not-so-clever, and certainly not flattering, adaptations of my last name (Kralik is pronounced “KRAY-lick” I’ll let your imagination run wild, but don’t worry, I have heard them all). As a result, at least in part, I was eternally curious about my surname.

When asked, my father simply asserted that my last name (and therefore my ancestry) was “Yugoslavian” (my father reaffirmed this claim even after Yugoslavia, which only really existed for a handful of decades, dissolved into the disparate factions that had been ruled over by a variety of entities for centuries–my father is an engineer, not a historian).

After a weeklong visit to Yugoslavia in college, I first learned that the country consisted of several smaller “states” which each had its own history, people, religion, and, usually, language. Part of that Spring Break trip (I was studying in Strasbourg, France and had taken the Orient Express to Istanbul) included a stop in Dubrovnik, the “Jewel of the Adriatic” but due to a storm in the Adriatic, which delayed my ship from Greece, I had to cut Dubrovnik out of the itinerary.

At the time, I chose not to be disappointed, instead, I remember thinking “don’t worry, Dubrovnik will always be there.”

Eventually, after several conversations all over the region, I “determined” that I was, in fact, Serbian, one of the many distinct nationalities that were once incorporated under the Yugoslavian flag. Part of what convinced me to opt for Serbian was the fact that the Croatians had sided with the Nazis in WWII.

This just in: the Nazis were not all that great.

Soon after my trip there, war broke out in the region, which had nothing to do with my visit. No, it was largely a result of the Serbian leader, Slobodan Milošević, who was determined to keep Yugoslavia together and may or may not wanted to exterminate the Muslims as a means to that end.

This just in: Slobodan Milošević was probably not that great of a guy.

So, just as the Serbs were bombing the bejesus out of Croatia, I decided to switch nationalities. I guess one could argue that I was a bit of the equivalent of a “fair-weather fan” but, well, I can live with that.

At the time, I followed the war fairly closely, or as close as I could in those pre-Google days, and I was heartbroken when I learned that the Serbs had laid siege to the medieval town of Dubrovnik. The bombing continued over eight months, destroying large swaths of the city.

I eventually discovered that I was neither Croatian nor Serbian. No, it turns out that I am Slovenian (another of the former Yugoslavian states, capital Ljubljana).

If you are like me, all you came up with was Melania Trump.

Despite the revelation that I was no longer what I had believed I was for so many years (yes, I am ignoring the shared heritage I may have with anyone whose last name rhymes with “rump”), I still had an unquenchable desire to visit my (now former) “homeland” (a couple of generations on my father’s side were born in Cleveland–I have been there with little desire to return, so that is not what I mean).

I wanted to go back to Croatia, a country that I had visited briefly in college, but I had only been in Zagreb, the capital which is a couple hundred kilometers from the coast, for which the country is most known. Specifically, I wanted to see Dubrovnik, that “Jewel of the Adriatic” which despite the contemporary reports of the war, the city was not destroyed; in fact, due to the hardy construction of almost all of the centuries-old buildings, the bulk of the damage was limited to the roofs–many of those, though, were completely destroyed.

For the millions of Game of Thrones fans, this turned out to be incredibly good news since much of the insanely popular HBO series was filmed in the city. While I am far from a GoT junkie, I did watch the series, eventually. But my attraction to Dubrovnik had nothing to do with the Starks or the Lannisters, it was all about my heritage. Or at least the one I had created for myself.

Last summer, I finally made it, and I was not disappointed. 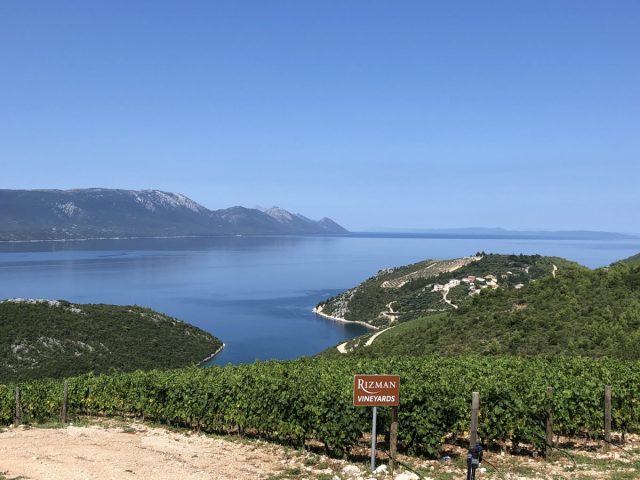 The drive down the coast was spectacular. We decided to hire a car service for the day as it made the most sense and we stopped a couple of times during the 4+hour drive, including at this vineyard. It was a spectacular spot, but I refused to partake in a tasting–I was keeping my eye on the prize.

Up until recently, the drive down the coast (which includes a brief 20 kilometers in Bosnia—don’t forget your passports!) was even longer. The addition of this suspension bridge shaved about an hour of the drive. 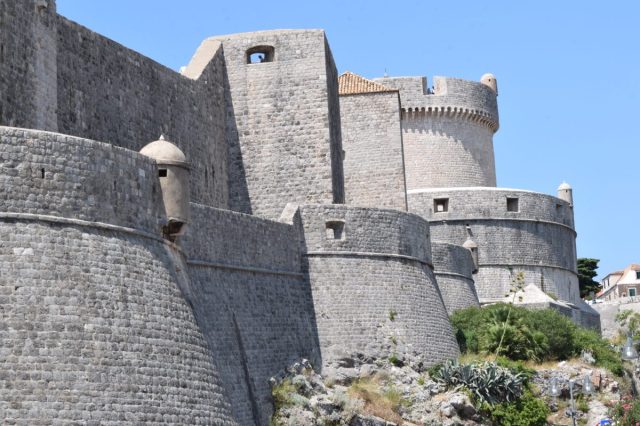 Pulling up to the old town of Dubrovnik, the defensive walls are impressive.

Once inside the walls, our tour guide gave us a bit of the history of the town.

Great views abound from the ramparts, and the tiles indicate which roofs were destroyed in the war (the bright orange tiles are the new roofs, the more earth tone roofs either survived the bombing or were rebuilt with intact tiles gathered from all over the city).

I have to admit that I like the orange tiles, but they are also a grim reminder of what happened to the city. 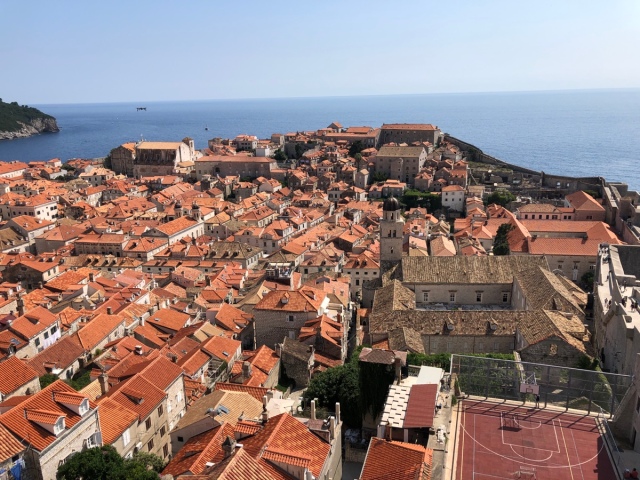 The view from the top is stunning, and that must be one really cool place to play basketball (lower right). 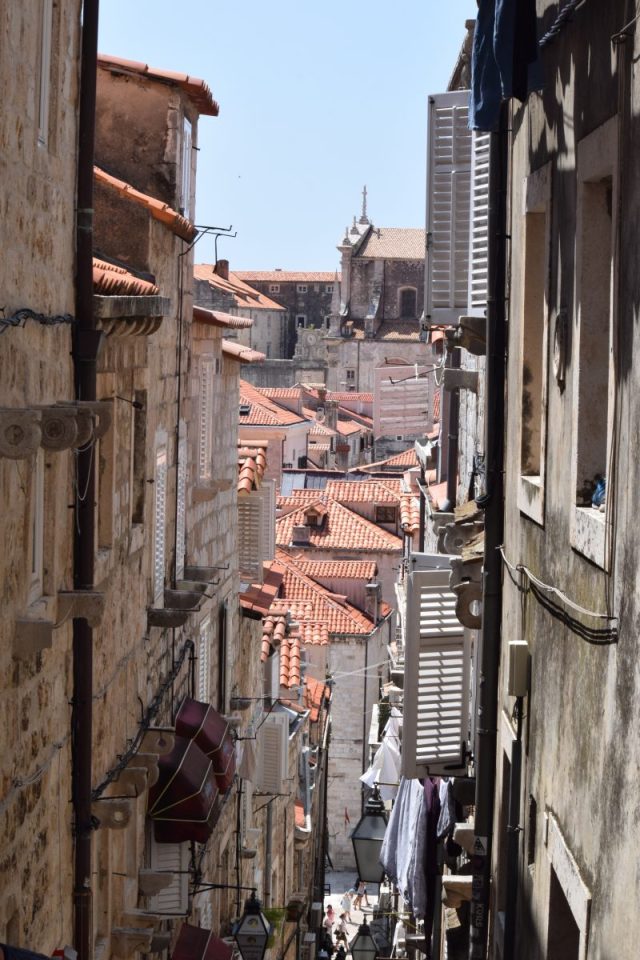 After a bit of time around the ramparts, we had a rather steep and narrow descent down to the base of the old town.

On the way down, the guide pointed out these curious holes that festoon most of the residences in the city. Since the dwellings are quite narrow inside, wooden rods are inserted in these holes to support the ropes that are used to hoist belongings up to the higher levels of the home–it is often impossible to get larger items up the narrow stairwells. This method, still used today, has been used for centuries.

Should you ever make it to Dubrovnik, be ready to battle the crowds.

I was fascinated by the roofs and tiles, in the foreground a new roof…

The old tiles are in high demand and can fetch a rather high price as people look to restore buildings to their pre-war state. Underneath, one can see that new tiles were used for the actual roof and the old tiles were placed on top for aesthetics.

There is no denying that the lack of uniformity in the old tiles is beautiful. 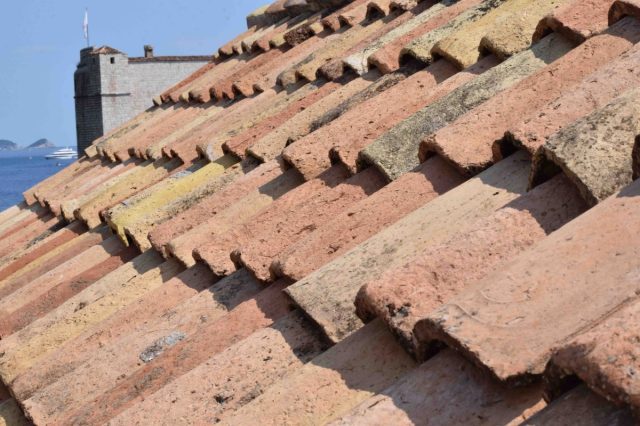 I took a lot of pictures of the roofs. 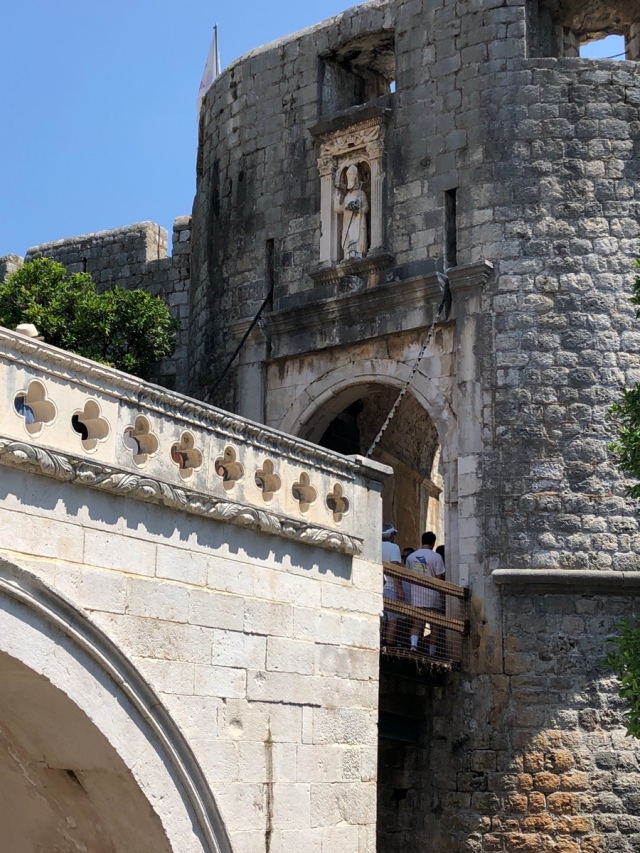 The town was fairly easily defended for most of its history. Until very recently, the drawbridges were raised at night and there was virtually no way to get into the old town. 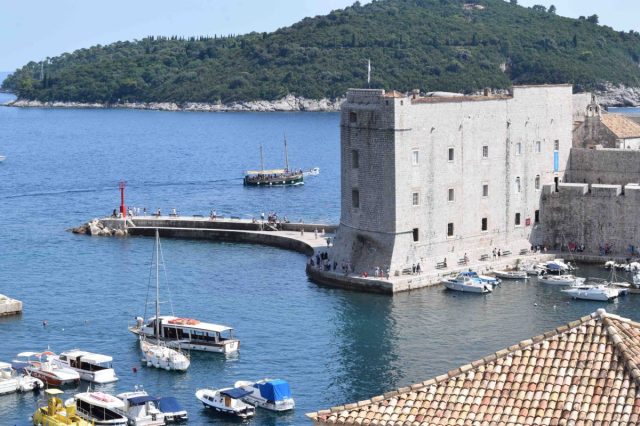 The only way to get in was through the port, which was fairly easily defended… 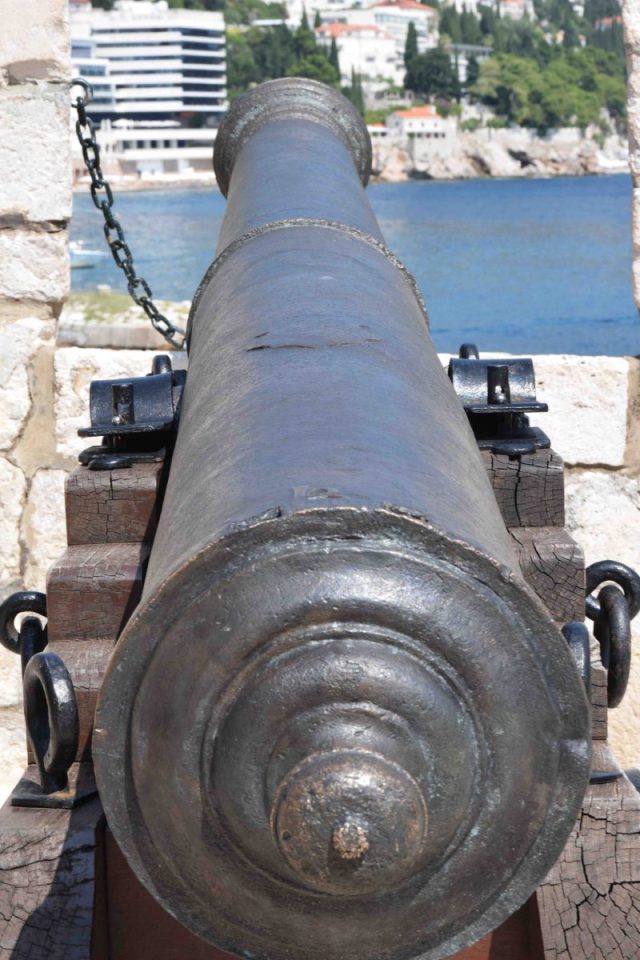 …with just a few of these bad boys.

The main “drag” if you will in the center of town.

The water is never far away in Dubrovnik…

…it’s always just on the other side of the imposing wall.

NOw for some red meat for those Game of Thrones junkies…

We had lunch overlooking Pile Harbour, which was the entrance to King’s Landing. Season 2 Episode 6 (S2E6) and S6E1.

As far as I know, this was not in the Game of Thrones, but I love this picture.

In the background is Fort Lovrijenac, which is just outside the walls of Dubrovnik. It was known as the Red Keep in the GoT in multiple episodes.

Fort Bokar, which is part of the city walls, was the backdrop of a conversation between Tyrion and Lord Varys (S2E8).

Not in GoT, but I say it should have been.

The city walls are in many episodes, but none had my lovely wife, who would have been a stellar addition, no?

The walls of the city are very, very cool, but you need to battle the crowds (and pay about $15) to get up to them.

Minčeta tower was the House of the Undying (S2E10). My wife makes it seems much less menacing, I think. Unless she were forced to face Cersei, of course. 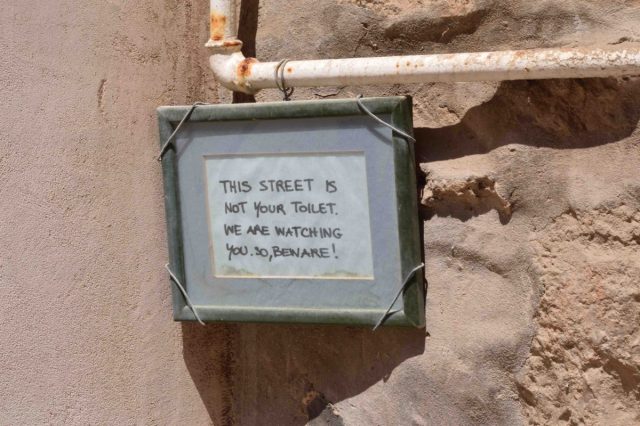 Also not in Game of Thrones, but, well, it’s written in English. I think I am ashamed.

It used to be a granary, but it served as the door to Little Finger’s brothel in the Game of Thrones.

No GoT connection, but cooooool.

The top of the Jesuit Steps which were better known as part of the Walk of Shame (S5E10). The awnings were removed for the scene.

I have been an occasional cycling tour guide in Europe for the past 20 years, visiting most of the wine regions of France. Through this "job" I developed a love for wine and the stories that often accompany the pulling of a cork. I live in Houston with my lovely wife and two wonderful sons.
View all posts by the drunken cyclist →
This entry was posted in Sicily, Wine. Bookmark the permalink.