Today, George Floyd will be laid to rest alongside his mother at Houston Memorial Gardens and thousands of people will brave the heat (the forecast calls for 97°) to pay their respects.

Like many, I have been amazed by the ongoing protests, now seemingly all peaceful, that have been occurring across the country and around the world. It is hard to believe that it was only a week ago that violence and conflict dominated the news cycle.

Some of those demonstrations have taken place in what I now consider my hometown: Philadelphia. While I did not go to high school in Philly, I have spent the most years of my life living in the 19130 zip code, which is close enough for me. Besides, I was married there, both of my children were born in the city, and I went to grad school there.

Surprisingly, we have yet to return to Philly since we left, nearly three years ago. Once it makes sense to travel again, the City of Brotherly Love is atop my list of places to visit.

Discussion of Philadelphia usually starts with the Liberty Bell and Independence Hall, part of the great history of the town that was the nation’s first capital.

There is much more to the city than it’s historical past. This is City Hall, the largest municipal building in the country (bigger than the U.S. Capitol) and the tallest masonry building in the world.

It is very much a city of statues including this one of Joan of Arc (I never quite figured out why she was in Philadelphia, but it was not far from where I met other cyclists for large group rides).

Philadelphia is very much a sports town and while the professional sports grab most of the headlines, there is no better place to watch a college game than in the venerable Palestra.

Philly is also a city of museums. While The Barnes is certainly a must-visit, don’t forget the Rodin Museum right next door, which has the largest collection of the artist’s sculptures outside of Paris.

Of course there is also the Philadelphia Museum of Art, made famous by Sylvester Stallone running up its steps as Rocky Balboa.

Which is where our boys first saw the film that Philadelphians love to this day.

There are plenty of outdoor spaces including Love Park…

…and the nation’s first Zoo.

We were also partial to Eastern State Penitentiary, the first “modern prison” which is today a museum. 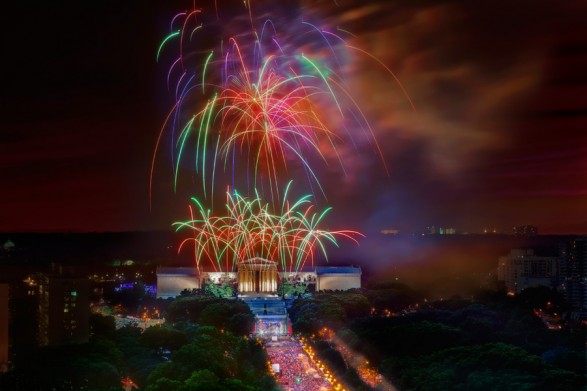 The Fourth of July is perhaps the best time to visit the city, but you will not be alone.

Spring is also a great time to go to Philly. Our street was often visited by tourists during the two weeks that the trees are in bloom.

It’s also a good time to visit Van Coln Field and watch a Little League game with the city’s skyline as a backdrop.

I would advise against going in the winter, however. I do not miss this aspect of Philadelphia whatsoever.

Although the kids certainly do.

I have been an occasional cycling tour guide in Europe for the past 20 years, visiting most of the wine regions of France. Through this "job" I developed a love for wine and the stories that often accompany the pulling of a cork. I live in Houston with my lovely wife and two wonderful sons.
View all posts by the drunken cyclist →
This entry was posted in Philadelphia, Travel, Wine. Bookmark the permalink.