This past July marked the fourth (!) anniversary of our great migration south; we had spent sixteen years in Philadelphia but packed it all up and moved to Beverly, er Houston. Prior to 2016, I can honestly say that I never once considered moving to the south, much less to Texas. Four years in? I have to say that I am legitimately disappointed: disappointed that I don’t hate it.

There are numerous reasons to like/love Houston, many of which I have iterated previously in this space. Namely, it is relatively inexpensive to live here, my wife job affords her a much nicer salary than she had in Philadelphia (although my meager “earnings” remain largely unchanged), the food scene is at least on a par with Philly, the wine scene is far superior to our previous situation, and the people here are really nice (yes, many of them have guns, but…).

There is one aspect about life in Houston that I do not like even remotely, however.

As hurricane Laura threatened the Gulf Coast these past few days, I started to think about the types of threats that are faced in different areas of the country. Growing up in the midwest, the real fear was tornadoes. While I never really experienced one, I certainly heard stories from my relatives about the devastation of tornadoes, particularly the twister that ripped through Xenia, Ohio in 1974.

I distinctly remember the drills that we went through in school, moving toward the center of the building and away from windows. While I used to think the reason that I hated the movie the Wizard of Oz was the scene with the creepy flying monkeys, but now I am pretty sure that it was due to the whole premise of the movie, centered around a Kansas tornado.

The three years I spent in Maine going to college was surprisingly not free of natural disasters as there were several serious snowstorms. (One such storm was on the way back from a basketball game in Worcester, MA when we were stranded on the MassPike for several hours after losing the game in overtime. Don’t worry, the loss was not my fault in any way as I was what I call a 20:20:2 player–I would only get in the game if we were either up 20 or down 20 points with less than 2 minutes to play.)

There was also a hurricane, surprisingly. Hurricane Gloria caused for the campus to be closed and boarded up. It also resulted in the near-constant playing of the late Laura Branigan’s hit Gloria, which to this day becomes an instant earworm for me at the mention of the name.

A few years after college, I moved out to California, living for four years in Marin County. While I lived, at least for a time, only a couple hundred yards from the actual San Andreas Fault, I did not experience an earthquake while living in the Bay Area (I was in Sonoma, however, during the Napa earthquake of 2014, which lasted for just a few seconds, but certainly freaked me out at 3:20 in the morning).

While most Californians seem to take the constant threat of an earthquake in stride, the far more terrifying prospect of a wildfire like they are experiencing now seems to be what keeps most awake at night with a bag packed by the front door.

My sixteen years in Philadelphia were fairly free of natural disaster-type scenarios. Sure, there was the occasional blizzard and the rarer still hurricane, but Philly is far enough south that the snow is never really that bad and far enough north that the hurricane is not that powerful. (I was going to make a remark about the state of Philadelphia sports teams being a disaster, but that does not seem appropriate).

Having lived in Texas for over four years now, that does not make me anything close to an expert, but the threat of hurricanes is pretty real. We survived Harvey in 2017 and fortunately, Laura decided to head just far enough to the east to leave us largely unscathed, but the threat alone was powerful. I made the mistake of venturing to Costco a couple of days before the storm. Yikes.

What kind of natural disaster freaks you out the most?

The best antidote for natural disasters (other than sensible and immediate legislation to address climate change)? A few bottles of local wine. (OK, that was a rather weak transition, I admit it, but I am already over 1300 words, so it is time to move on.)

Today’s wines come from Pedernales Cellars in Stonewall, just east of Fredericksburg, Texas. The first vineyards were planted in the early 1990s, and the winery opened in 2005. the winery produces close to a dozen wines, drawing fruit from both the home vineyard in the Texas Hill Country AVA and the Texas High Plains AVA.

2018 Pedernales Cellars Viognier Reserve, TX: Retail $40. 100% Viognier. This past month has been my first foray into Texas wine and in my limited experience, it seems as though Viognier has a case to be considered the “state white” wine. And this particular iteration from Pedernales is fantastic. White flower, pear, peach, and considerable minerality on the nose. In fact, I doubt I have tried many other wines with such a strong mineral aspect as this Vio. The palate is delightful–many Viogniers come off as too floral to the point of astringency. Not here. Yowza. Fruit, minerality (as one would assume from the nose), but also a zingy acidity that holds it together beautifully. Bravo (and almost a whoa). Excellent. 91-93 Points. 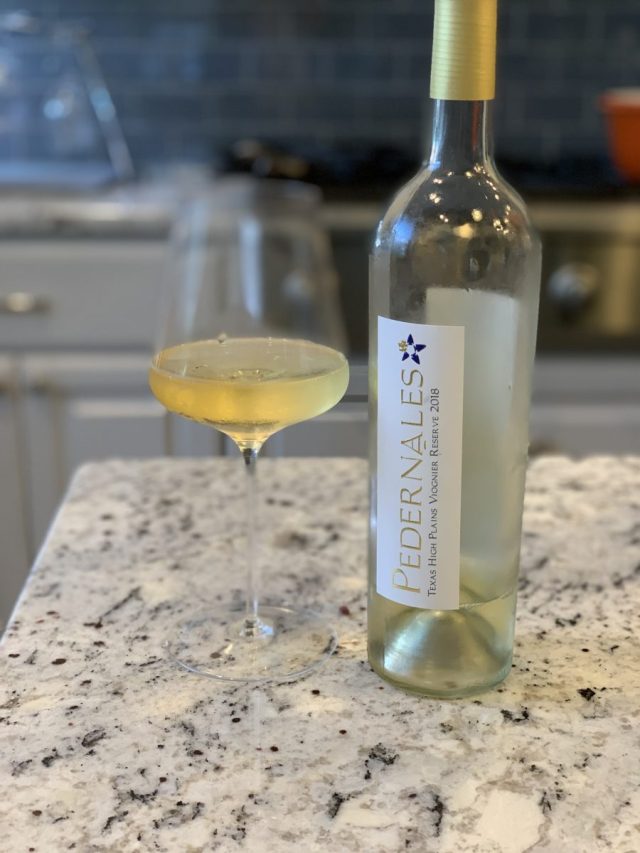 2017 Pedernales Cellars Texas GSM Melange, Texas Hill Country, TX: Retail $35. 43% Mourvèdre, 25% Grenache, 14% Cinsault, 10% Carignan, 4% Syrah, 4% Petite Sirah. Despite the name, the wine contains several additional Rhône varieties, which blend into a lovely wine with red berry fruit, cassis, and a bit of smoky oak on the nose. The palate is initially quite fruity immediately followed by a healthy dose of tartness and a few levels of depth. Quite subtle tannins on the above-average finish. This is a wine for Texas wine lovers who seem to want their wines red, fruity, on the big side, and able to hold up to a variety of cuisines. Excellent. 90-92 Points.

2017 Pedernales Cellars Malbec, TX: Retail $40. 95% Malbec, 5% Petite Sirah. Malbec can take on many forms. It originally hails from Bordeaux, where it was mostly used as a blending variety. In nearby Cahors, it is known as Côt and usually produces rather lean wines that are largely defined by the rather intense tannic structure. In Argentina, where it has no doubt achieved its greatest acclaim, Malbec tends to be rather fruity, boisterous, and bold. This wine? while the website states that it is closer to Cahors than Argentina, I would have to respectfully disagree and assert that this wine is more reminiscent of the South American version: dark in the glass (which is due in part to the 5% Petite), with bold fruit (plum), mocha, oak, and a splash of vanilla. The palate is a tad more reserved, but there is still plenty of fruit (aforementioned plum as well as cassis), a unifying tartness, and a longer than average finish. Tannins? Fairly subtle (which is how few would describe a young Cahors). Still? Very Good to Excellent. 89-91 Points.

While any of the four wines would have paired well with my homemade tagliatelle al ragù alla Bolognese, the Tempranillo was an excellent choice, if I do say so.

2016 Pedernales Cellars Tempranillo Texas High Plains, TX: Retail $40. 100% Tempranillo. Quite dark in the glass, with dark fruit (blackberry, cassis, blueberry), anise, and cedar–quite a lot going on in the glass. The palate? Yowza. Tons of fruit (tart black cherry) with a decided herbal note (sage?), plenty of acidity, and just a hint of tannin on the fairly lengthy finish. While I guess this is technically a “lighter-bodied” wine with an ABV under 13%, it still packs a pretty powerful punch when it comes to flavors and depth. Excellent. 91-93 Points.

I have been an occasional cycling tour guide in Europe for the past 20 years, visiting most of the wine regions of France. Through this "job" I developed a love for wine and the stories that often accompany the pulling of a cork. I live in Houston with my lovely wife and two wonderful sons.
View all posts by the drunken cyclist →
This entry was posted in Carignan, Cinsault/Cinsaut, Grenache, Malbec, Mourvèdre, Petite Sirah, Syrah, Tempranillo, Texas, Viognier, Wine and tagged Texas. Bookmark the permalink.