Almost three years ago now, Snooth.com published an article I wrote for them about Sweet Bordeaux, called “Experiments in Sweet Bordeaux.” While I will not go into depth about what I wrote in that article (if you have a minute or twelve, you should go check it out, I think it is fairly good, if I do say so myself), I was invited to the region by the Sweet Bordeaux Association, a subset of the CIVB (Conseil Interprofessionnel du Vin de Bordeaux or Bordeaux Wine Council).

In brief, the Sweet Bordeaux Association has a fairly straight-forward charge: to convince the wine-drinking public that the sweet wines from Bordeaux (made in ten communes which include Barsac, Loupiac, Cadillac, Sainte-Croix-du-Mont, and the most widely known, Sauternes) are not just for dessert. The aim of that trip (and the over-arching goal of the Sweet Bordeaux Association) was to show that sweet wines should be on the dinner table throughout the meal, not just at the end.

Despite what you may think, these botrytized Sémillon grapes are actually ready to pick (and I did).

Since that trip, the fine people at the Sweet Bordeaux Association have sent me a few more bottles of the delectable wines from the region to pair with meals of my own creation, which I have been joyfully preparing over the last few weeks. Here are a few of the meals paired with a “typical” wine choice and a Sweet Bordeaux. 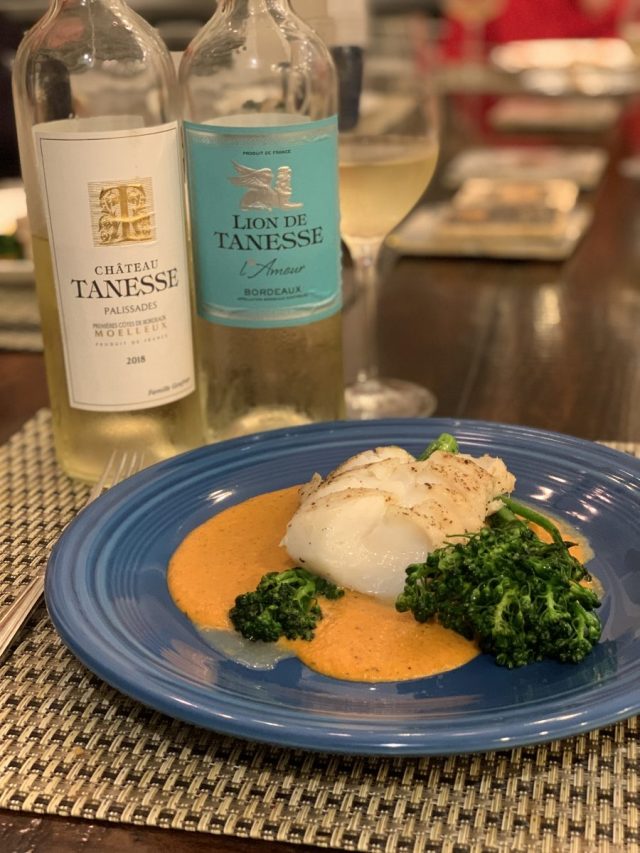 One of the staples in our house, I adapted a classic Thomas Keller recipe of monkfish with Romesco sauce for my family. My father-in-law prefers cod to monkfish and I add a bit of Gochujang (a Korean spicy red pepper paste) to the Romesco sauce since my wife’s parents are both from Korea. For this dish, I opted for two relatively new wines from Château Tanesse which are slightly less sweet than a “typical” Sweet Bordeaux.

2019 Château Tanesse Lion de Tanesse, Bordeaux, France: This is a relatively new wine (I think) from the Château and as such, information about the wine is scant. I know that it is a blend of Sémillon and Sauvignon Blanc but after that? Not much. I imagine it is in the $10-15 range. Delicate citrus notes (lemon and lime) and a bit of yellow apple on the nose, understated on the palate but the fruit is there as is a very nice tartness. Just a hint of sweetness, this is a pretty darned versatile wine: apéritif, light cheeses, charcuterie, and most fish dishes. Delightful. Very Good. 88 Points.

2018 Château Tanesse Moelleux, Premières Côtes de Bordeaux, France: Retail $20(?). 85% Muscadelle and 15% Sauvignon Blanc. Decidedly sweeter than the Lion de Tanesse and more aromatic as well (due, no doubt to the Muscadelle). I tasted this first as part of a webinar on Sweet Bordeaux and it is abundantly clear that this improved as it warmed–serve at around cellar temperature (55° or even slightly warmer). At that warmer temp, this is quite tropical on the nose along with some lemon peel and minerality. Pretty fruity on the palate as well and while sweet, I would say this is closer to “off-dry” than it is to “dessert.” Above-average acidity and a wide variety of pairing possibilities. Very Good. 89 Points.

While I would normally pair this dish with a Chardonnay or even a rosé, both of the Château Tanesse wines worked very well here. Of course, they are not nearly as sweet as the wines below, but the Sweet Bordeaux theory works well here.

After years of resistance, I finally succumbed to my basketball-obsessed boys’ request to rebrand the second night of the school week as “Taco Tuesday” (they claim the term was invented by LeBron James and I feel no need to argue this point). Thus, on any given Tuesday, we will invariably have some iteration of that theme including fajitas, enchiladas, even nachos. I typically slowly cook the shrimp (usually over about 30 minutes), which gives me time to make the Greek yogurt-based slaw (into which I sneak a few jalapeños) and my garlic-rich guacamole. Together, it seemed like a good pairing with two traditional wines from Loupiac.

2015 Château Dauphiné-Rondillon, Loupiac, Bordeaux, France: Retail $15 (375 ml). 80% Semillon, 20% Sauvignon Blanc. Getting a bottle of dessert wine this good (albeit a half-bottle) for under twenty bucks should be a crime. Tropical fruit along with tangerine and apricot (oh, the apricot!) are mere invitations into this wine. The palate is wonderfully rich and unctuous with intense fruit and sweetness which are quickly balanced by the lip-smacking acidity. Holy cow and giddy-up! Excellent. 92 Points. 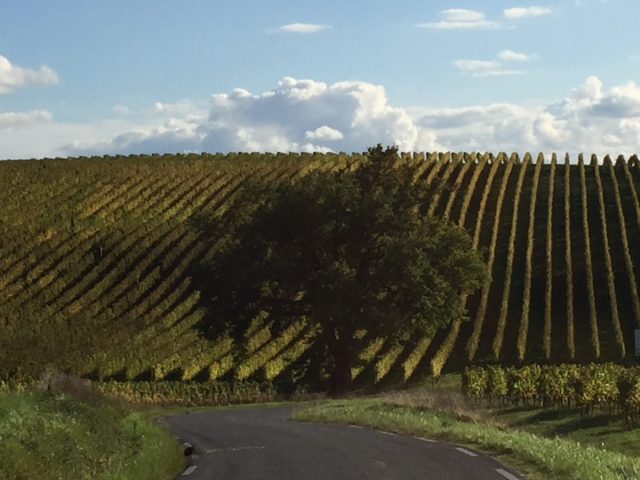 The vineyards in Bordeaux are stunning in the Fall.

2014 Château du Cros, Loupiac, Bordeaux, France: Retail $30 (500 ml). 90% Sauvignon Blanc, 6% Semillon, 4% Muscadelle from 40+-year-old vines. I visited #SweetBordeaux almost three years ago now and while much of the trip was impressive, near the top of the list was the time with Michel Boyer of Château du Cros. Monsieur Boyer was both a curmudgeon and charmer (if that is possible) and passionate about his estate. As he should be. Honeyed tree-fruit (peach and pear), incredible acidity, and a finish that lasts for days. This is a special wine, from an incredible place, for a stupid price. Enjoy. Excellent. 93 Points.

While not many would reach for a Sweet Bordeaux when serving up dinner on a Taco Tuesday, both wines were fabulous and paired quite well with the spice and salt. Definitely, a pairing to revisit.

I will be back next week with more Sweet Bordeaux pairings!

I have been an occasional cycling tour guide in Europe for the past 20 years, visiting most of the wine regions of France. Through this "job" I developed a love for wine and the stories that often accompany the pulling of a cork. I live in Houston with my lovely wife and two wonderful sons.
View all posts by the drunken cyclist →
This entry was posted in Bordeaux, Bordeaux Blend, Muscadelle, Sauvignon Blanc, Sémillon, Wine and tagged SweetBordeaux. Bookmark the permalink.