Westwood and Annadel Gap Vineyards: A Cool Passion (An Update)

Posted on February 11, 2021 by the drunken cyclist

I first wrote these words nearly eighteen months ago, after having met Carl Stanton, the managing and founding partner of Westwood Estate Wine, a few months prior in New York. It seems like forever ago. Nonetheless, I repost these words again updated with current vintages.

In many ways Carl Stanton is a typical winery head: he is an East Coast finance guy who has always loved wine. Just over twenty years ago, he and two friends decided that they wanted to own a vineyard and perhaps, eventually, make their own wine. And in 1998, that is what they did, purchasing a plot of land just south of Santa Rosa in Sonoma County.

In one significant way, though, Carl is not “typical” at all: while his vineyard is in Sonoma County, he still lives in the Upper West Side. Of New York City. When he took sole control of the vineyard and brand in 2014, he was considering finally moving to Sonoma, but as he put it when I met up with him a few months ago in New York, “I decided to get divorced instead.”

Since his now ex-wife, with whom he maintains a “great relationship,” was staying on the East Coast with their school-age children, he had no choice but to stay in New York to be close to his kids and manage the big changes occurring with Westwood from afar, racking up frequent flier miles in 6,000 mile chunks. 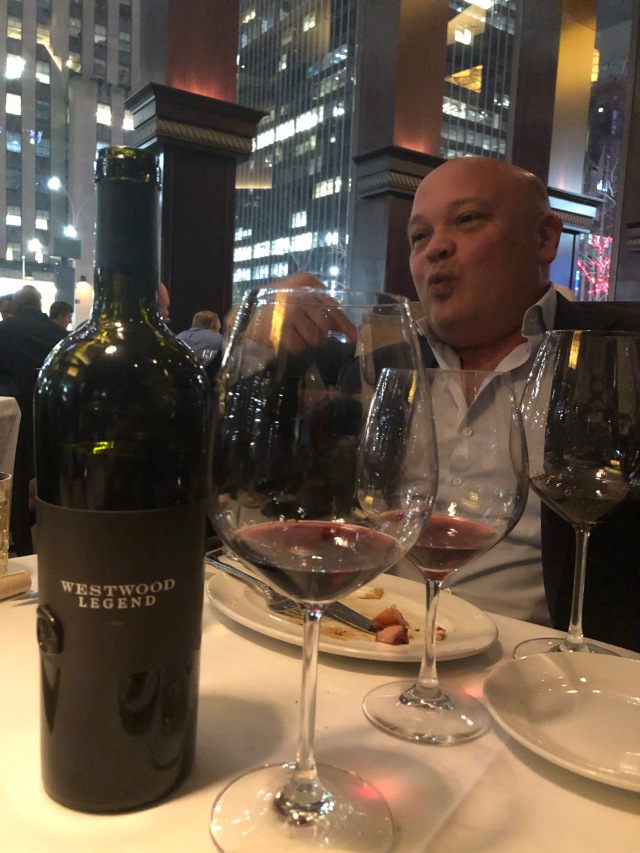 The best shot I got of Carl at our dimly-lit mid-town restaurant.

Making it a bit more difficult, around that same time, Carl decided to convert the vineyard to biodynamic farming and to take its distribution beyond California (Westwood is now in approximately 30 states). He also hired David Ramey as a consultant, completely changed the vineyard and winemaking teams (after a few changes, Philippe Melka is now head winemaker), and designed a new, more sophisticated label, all of which were necessary Carl said to “kick Westwood into overdrive.”

What has not changed since starting the project in 1998 is Carl’s intense focus on the land. The Annadel Gap Vineyards are in the northernmost section of Sonoma Valley where the climate is cool and quite windy, more similar to the Petaluma Gap than the Russian River Valley. Carl and his partners had to start from scratch with then fallow land, obtaining permits, installing irrigation and, in 2001, planting the first vines. Just to make it interesting, they planted nine clones of Pinot and four of Syrah along with Mourvèdre, Counoise, Grenache, Tannat, Rousanne, Viognier, “and a few others.”

The property is 33 total acres, of which 23 have been planted, and Westwood makes about 3,500 cases of wine annually, all at a custom crush facility in Sonoma. The wines are almost exclusively sold direct-to-consumer (through a healthy mailing list and their tasting room on Sonoma Square) and on-premise in restaurants across the country.

During my time with Carl, one element was abundantly clear: he is passionate about his vineyards and his wines. Now many can no doubt claim the same, but as I tasted the wines below at my desk in Houston, I could not help but hear Carl’s hearty laugh and see that twinkle he gets in his eyes when he talks about Annadel Gap.

2018 Westwood Chardonnay Sangiacomo Vineyard Roberts Road, Sonoma Coast, CA: Retail $55. Clones 17 and 95. The Sangiacomo Family considers the Roberts Road Vineyard as the most prestigious that the family farms and when paired with Philippe Melka’s guiding hand, well, one can pretty much guarantee a stellar wine. And it is. Pale straw in the glass with plenty of aromas to dissect: rich lemon curd, acacia blooms, a flinty minerality, and touches of white smoke, vanilla, and oak (but by no means “oaky”). The palate is fantastic with subtle citrus fruit, just the right amount of heft, wet crushed stone, and a unifying tartness that is always present but never dominant. I was first introduced to Westwood a few years ago and I mentioned to managing partner Carl Stanton at a dinner in Manhattan that he needed to produce more whites. So far he has not listened to me. After tasting this wine, I’m calling him tomorrow and I’m going to make him listen. Whoa. Outstanding. 94 Points.

2017 Westwood Pinot Noir Sonoma County, CA: Retail $52. Under cork. B.A.B. A blend of six different clones from two different vineyards, this Pinot is fairly dark in the glass and quite closed on the nose upon opening. After a bit of time open, aromas of dark cherry, black raspberry, cola nut, and a hint of anise. The palate is simply lovely, with incredible balance, driven by a unifying acidity which links the subtle fruit and earthy notes together in a seamless fashion. I first became aware of Westwood a couple of years ago and I am an unabashed fan. Excellent. 92 Points.

2017 Westwood Legend, Sonoma County, CA: Retail $65 (usually around $40 on the shelf). 46% Cabernet Sauvignon, 25% Syrah, 19% Mourvèdre, 10% Grenache. B.A.B. One of the heaviest bottles I have ever seen. I really like Carl Stanton, the managing partner at Westwood, and I really like the wines made in conjunction with Philippe Melka. I also appreciate their stated stance (as posted on their website): “Sustaining the land, animals, and the team that makes our wine possible is the foundation of our culture.” But. I have no idea how anyone can think that this bottle is nothing other than an environment destroying close to five pound bomb. The wine? As I thought, it’s fantastic. Dark in the glass with dark berry fruit (boysenberry, blackberry, cassis), plum, dark earth, spice, just a lovely nose. The palate is fantastic as well, with oodles of fruit, plenty of acidity, some soft tannins, and a lengthy finish. It is a very nice wine. But come on. Outstanding. 93 Points.

2017 Westwood “Twenty-One” Annadel Gap Vineyard, Sonoma Valley, CA: Retail $105. Under cork. B.A.B. This wine is a blend of Syrah, Mourvèdre, and Grenache, no indication of how much of each. The name of this wine, “21”, comes from the statement “It took us twenty-one years to learn to make this wine,” from founder Carl Stanton. Dark in the glass–a deep Ruby color with plenty of dark fruit aromas (black raspberry, cassis, plum), spice (clove, allspice, pepper), and subtle oak. The palate is both big and balanced with an initial wave of fruit followed by some bright acidity, earth, and a noticeable tannic grip on the lengthy finish. This wine is quite nice now, but it will improve over the next 5-10 years, for sure. Whoa. Outstanding. 94 Points.

I have been an occasional cycling tour guide in Europe for the past 20 years, visiting most of the wine regions of France. Through this "job" I developed a love for wine and the stories that often accompany the pulling of a cork. I live in Houston with my lovely wife and two wonderful sons.
View all posts by the drunken cyclist →
This entry was posted in Cabernet Sauvignon, Chardonnay, Grenache, Mourvèdre, Syrah, Wine. Bookmark the permalink.

2 Responses to Westwood and Annadel Gap Vineyards: A Cool Passion (An Update)