An Exclusive Tasting with Château La Nerthe (the Reds)

Posted on January 6, 2022 by the drunken cyclist

Over the course of the nearly ten years writing this blog (the 10-year anniversary is January 12, 2022), I have had the opportunity to visit some beautiful regions (although not that much in the last two years), eat incredible meals, and, of course, try some amazing wines. While all that is certainly true and surpassed even the craziest dreams I might have had a decade ago, by far the most impactful part of this rather amazing journey has been the people that I have met as a result of this little website.

Among the scores of winemakers, vintners, farmers, marketers, public relations professionals, cellar workers, retailers I have met, I consider a healthy number of them friends, several of whom have visited us in Houston. Again, I never envisioned such a scenario ten years ago, but today it seems, dare I say, “normal”?

One of those people that I have met and whom I now consider a friend is Christophe Bristiel, the export manager for Château la Nerthe, the oldest producer of record in Châteauneuf. He was in Texas for TEXSOM back in November and decided to stop by Houston for a couple of days afterward.

He sent a bunch of wine ahead of his visit, including all of the current releases from Château la Nerthe, which we tasted through one glorious afternoon, apparently, the first time anywhere that the 2019s were tasted together as a group. A couple of weeks ago, I published the notes for the whites, even though we tasted through the reds first. 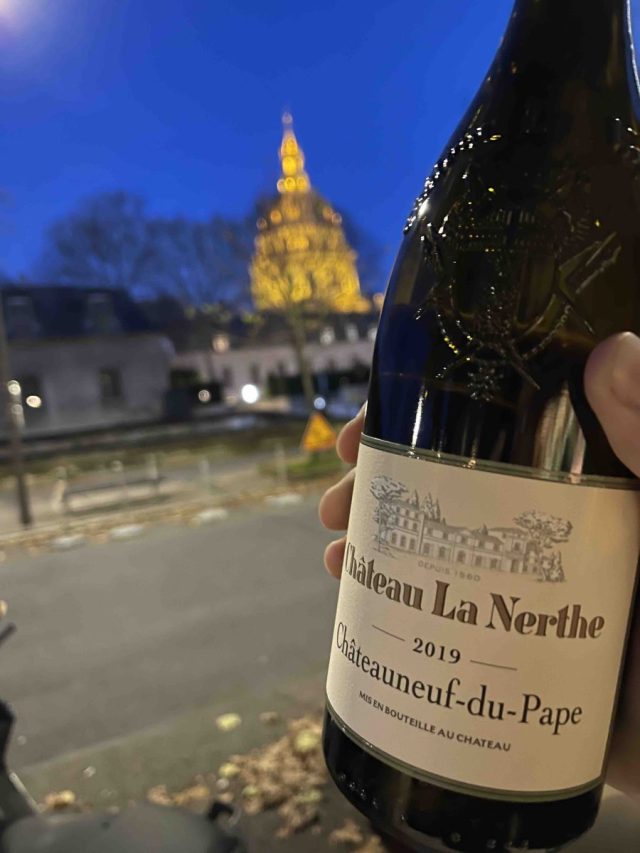 I had to trek across Paris to find a bottle of the 2019 La Nerthe Blanc. It was well-worth it. Paris at night is stunning and the wine divine.

2019 Château La Nerthe Côtes du Rhône Villages Les Cassagnes de la Nerthe, France: Retail $25. 50% Syrah, 30% Grenache, 15% Mourvèdre, 5% other indigenous varieties. This marks the first time ever that this wine is a majority Syrah due to the very low yields with Grenache (due to lack of water). Normally, the percentages are reversed, with 50% Grenache and Syrah around 30%. This is labeled as a Côtes du Rhône Villages but it could also add Massif du Chau, but the winery decided against the labeling. Very rich nose of ripe red fruit, garrigue, rosemary, thyme. Often referred to as a “baby CdP” which is evident: rich, luscious fruit, really opulent, but also quite earthy and mineral-driven. Truly a magnificent wine, and for the price? Holy cow. Sold mostly as a bistro, restaurant wine, with a large by the glass consumption, particularly in Paris. Outstanding. 93 Points.

2019 Château La Nerthe Châteauneuf-du-Pape Les Granières de la Nerthe, France: Retail ~$40. 55% Grenache Noir, 25% Cinsault, 10% Mourvèdre, 10% Syrah. Les Granières has been seen in print since the mid-1700s as a lieu-dit in the middle of the vineyard at Château la Nerthe. In Châteauneuf-du-Pape as a whole, the average in the vineyard is 75% Grenache, 15% Syrah, 5% Mourvèdre, and 5% other indigenous varieties. Château la Nerthe has a much higher percentage of Syrah both in the vineyard and in the wines. This is the first vintage of this wine, with a more classic CdP blend, no barrels just large foudres are used, and not aged nearly as long. This will be launched in the U.S. early this year (2022). The first cases left the winery on 11/16. Garrigue on the nose with plenty of sage and rosemary, red and dark berries, really lovely. Much more subtle on the palate initially with the intense tartness at the forefront. The fruit rushes in at the mid-palate and immediately competes with the acidity for attention. By the finish, some chalky tannins join in, but they are mostly integrated and subtle. Yowza. Another stunner. Outstanding. 94 Points.

2019 Château La Nerthe Châteauneuf-du-Pape, France: Retail $50. 35% Syrah, 33% Grenache, 31% Mourvèdre, 1% Others. The essence of everything they do at la Nerthe, the oldest producer of Châteauneuf-du-Pape on record. A lower proportion of Grenache than most of the producers in the region, with a much higher proportion of Mourvèdre in 2019 since it was a very good year for the variety. Whoa. This is one of those wines that I could smell all day long. Easily. A mixture of barrel and foudre with a small percentage of new oak. Starting to use some whole cluster, do not destem as 100% anymore. Both red and black raspberry, barrique, plum, slightly herbal. Yowza. Fruity and tart on the palate from the start with plenty of heft and oodles of intrigue. This is what I think of as the expression of CdP, but, of course, I am biased. Just a hint of tannin on the finish, but this should age a decade-plus, easily. Outstanding. 95 Points.

2019 Château La Nerthe Châteauneuf-du-Pape Cuvée des Cadettes, France: Retail $120. 55% Mourvèdre, 25% Syrah, 17% Grenache, 3% Others. This wine, one of the top cuvées produced at la Nerthe, is almost always co-fermented, but not this time due to the spread of maturity at harvest. Instead, the fruit was vinified separately but aged together. La Nerthe used to harvest the plots basically in the same order, but it is becoming much more unpredictable and “all over the place” due to the dramatic global heating. In the glass? Whoa^2. Holy crap. I said I could smell the flagship CdP for days, well this would be longer than that. Christophe says this is close to ’98 which he considers the benchmark for Cadettes. Rich, almost unctuous fruit, blackberry pie and cassis, woven in with hints of earth and other-worldliness. Black pepper and clove, whoa. Rich, and weighty, this is an amazing wine. Laden with those dark and some red fruit, an understated elegance underscores this wine—it has all the components in spades, but none outshines the others. Whoa. Extraordinary. 98 Points.

2019 Château La Nerthe Châteauneuf-du-Pape Les Clavelles, France: Retail $150? 100% Grenache. I was one of the first Americans to taste the first iteration back in 2015, and I get to have that honor for this 2019. Les Clavelles is the name of a 1.2 hectare (just under 3 acres) plot at the junction of la Nerthe and la Crau (one of the more famous plots in Chateauneuf). Quite light in color, so much so that one could be easily convinced that this were a Chambolle-Musigny, for example. The nose is a bit shy but more perfumed than the other 2019s from La Nerthe that I tasted, with red currant, raspberry, red plum. Yowza. The palate? Holy Mother of God. Rich, but elegant, powerful yet graceful. Concentrated fruit, plenty of la Nerthe earth, significant but silky tannins. How do you evaluate a wine that touches the taste buds in such a manner? Which do I prefer, les Clavelles or les Cadettes? That is truly a loaded question. Extraordinary. 97 Points.

I have been an occasional cycling tour guide in Europe for the past 20 years, visiting most of the wine regions of France. Through this "job" I developed a love for wine and the stories that often accompany the pulling of a cork. I live in Houston with my lovely wife and two wonderful sons.
View all posts by the drunken cyclist →
This entry was posted in Châteauneuf-du-Pape, Cinsault/Cinsaut, Grenache, Mourvèdre, Syrah, Wine. Bookmark the permalink.