Last week, I published a few photos from the first day of my brief trip to Lago di Garda, hosted by the wonderful people at GardaDOC, a relatively new appellation (established in 1996) in north-central Italy. Today, I am back with a few photos from Day Two.

As I mentioned last week, my flight to Verona was cancelled due to a strike by the Italian air traffic controllers, resulting in a ten-hour delay in the Frankfurt airport. I eventually made it to lovely Lake Garda shortly before midnight (I was supposed to arrive around 2 pm) a bit grumpy and tired, but ready for the experience (albeit brief) of the next two days.

The highlight of Day One was certainly the three-hour cruise on Lake Garda aboard the Siora Veronica, a 24 meter (79 feet) wooden schooner built in 1926. It was a memorable evening on the boat (or was it a ship?) and Day Two would have some work to do to catch up.

No need to worry, it did.

The second day with GardaDOC started at Cantina Ricchi and a tour of the vineyards and winery, culminating in one of the best Chardonnays I have ever had in Italy.

The vintage (2016) was no longer available, but the Ricchi Meridiano Chardonnay sold for a mere 9€ (about ten bucks) upon release. I would have bought a case and figured out a way to get it home.

Next, we headed to another family-owned and run estate, Pratello, which was founded in 1867. We visited a bit of the property, including the incredible 13th Century chapel. 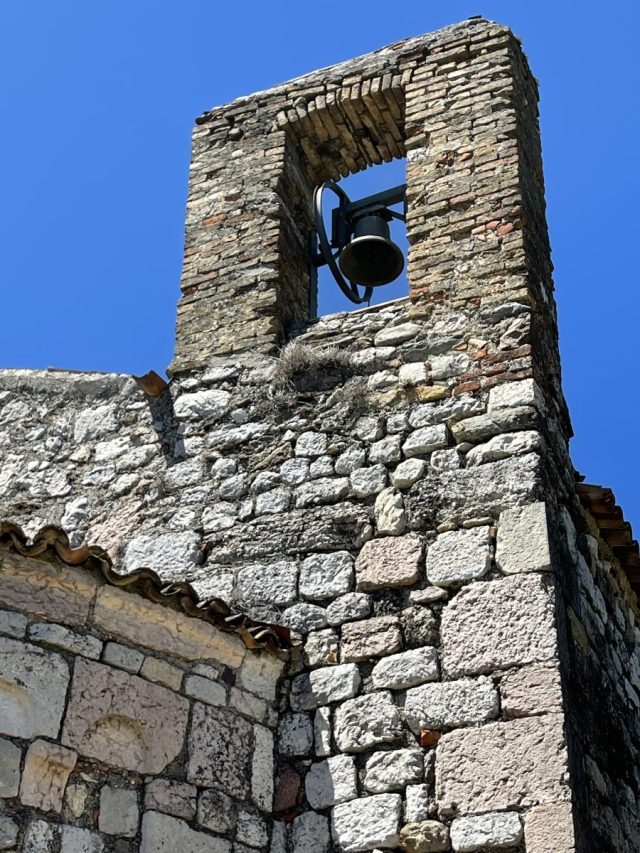 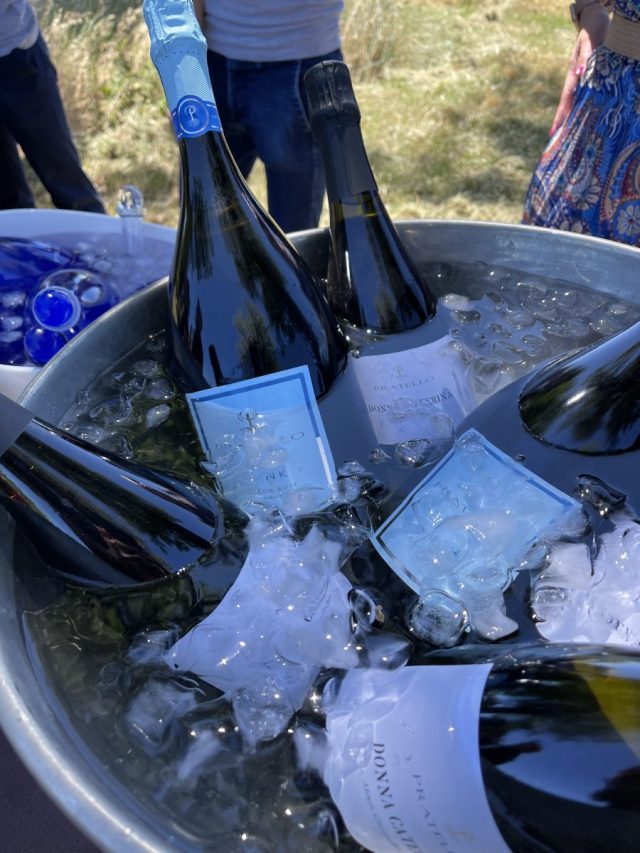 We stopped among the vines for an apperitivo before lunch. You know, as one does.

There may also have been a 1964 Volkswagen Beetle convertible that I tried to squeeze into. 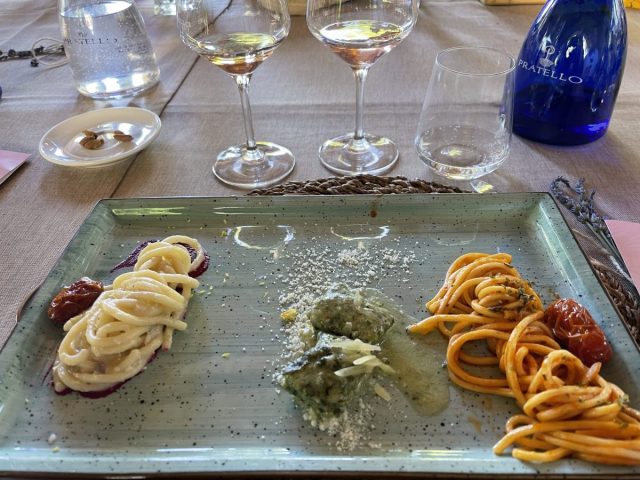 There is a restaurant at the winery and the four-course lunch was one of the best I have had.

We then raced back across the lake, this time in a motorboat, passing many historical sites along the shores, including the Scaliger Castle, which also dates from the 13th Century and is surrounded by Lake Garda on three sides.

After docking back in Bardolino, I had to race up a hill to get to a pharmacy before it closed. I was one of the last people required to have a negative COVID test in order to renter the US (my flight back was the following day).

After a brief stop back at the hotel, we were off again, this time to Borgo Rocca Sveva, perhaps the crown jewel of the Cantina di Soave, Italy’s largest wine cooperative. The stunning winery is adjacent to the Castello di Soave, the medieval castle that dominates the horizon for miles.

We started with a tour of Rocca Sveva. And while I have been through a ton of barrel rooms, this one might have been the most stunning.

We then hiked up to a garden above the winery for an aperitivo as the sunset. You know, as one does.

I don’t really need to say much here. 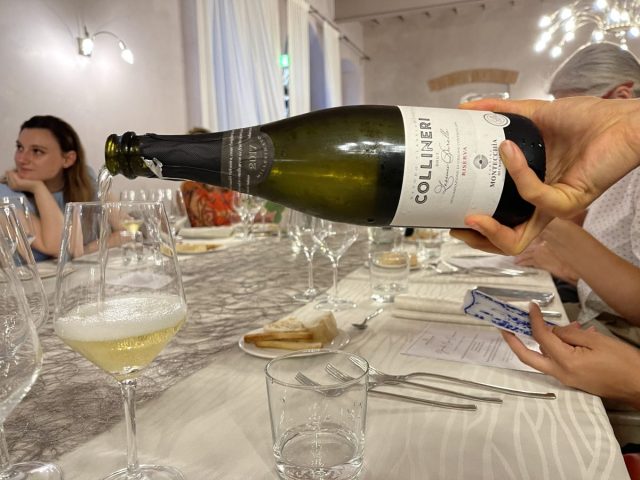 All that was left was a few more bubbles… 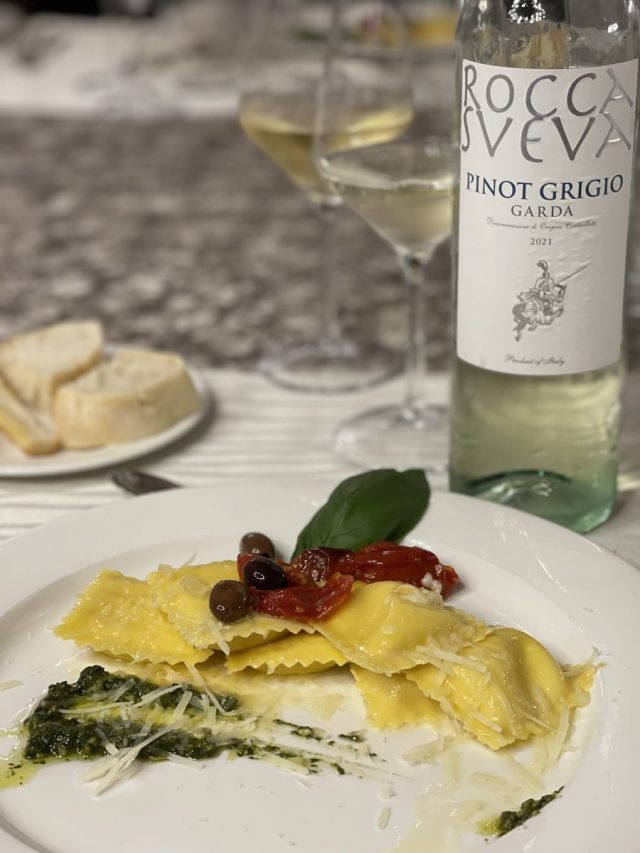 …and, of course, a bit more pasta.

I have been an occasional cycling tour guide in Europe for the past 20 years, visiting most of the wine regions of France. Through this "job" I developed a love for wine and the stories that often accompany the pulling of a cork. I live in Houston with my lovely wife and two wonderful sons.
View all posts by the drunken cyclist →
This entry was posted in Italian Wine, Lago di Garda, Wine and tagged #GardaDOC. Bookmark the permalink.