Posted on January 4, 2013 by the drunken cyclist

Yesterday, I posted the details of the Saturday trip up to the Woodinville area with my father-in-law. We hit five tasting rooms and I came back with four bottles. Given the brevity of the visit and the proximity of the area, I decided to give it another shot on Sunday. Surprisingly, my wife not only acquiesced, but she agreed to come along with me. At the last moment, my tasting buddy from the day before, my father-in-law, decided to join us, too. After lunch, we hit the road, meaning we would need to hustle a bit to cross the remaining tasting rooms off my list. Luckily, I convinced my wife’s father to at least consider spitting once in a while.

After the previous day of Bordeaux blends and Syrahs, I was looking forward to our first stop, Lachini Vineyards which is a winery in the Willamette Valley (OR) and produces mostly Pinot Noir. As with Gorman Winery the day before, I thought the wines were superb, the tasting room was tastefully done, but the staff seemed less than excited to engage us. After some debate about buying some wine, we decided to move on.

Next on the list was the Mark Ryan Winery just a few yards away. The tasting room was vibrant with patrons about three deep at the tasting bar all laughing and enjoying themselves–quite the contrast from our previous stop. I kept hearing that Mark Ryan was a bit of an up and coming rock star in Washington and the atmosphere in the room seemed to support that assertion. We tasted several wines, all of which (except one) were blends. Interestingly, the only wine that was not a blend, the 2010 Lost Soul ($48) really stood out for me. 100% Syrah, the wine is inky and smokey with great fruit and texture. The smokiness lingers on the finish–a really nice wine. 90-92 points.

The next stop was The Bunnell Family Cellar in the warehouse district of Woodinville. Within seconds of entering, we were greeted warmly and invited to take a seat at the tasting bar. We were then carried through countless wines while given the history of the winery–Ron Bunnell, the founder and owner, was the former winemaker at Beringer, Chateau Ste. Michelle, and Kendall-Jackson. The wines were either interesting or delightful and often both. The standouts? There were several, but for me the 2008 Bunnell Mourvèdre ($36), was fantastic. I wrote the word ‘Wow’ twice in my notes–I really did not know what to make of the big fruit wine with nice acidity–almost the antithesis of a young Bandol (the region in France perhaps the best known region for Mourvèdre). The others were the two Syrahs–the 2007 Bunnell Syrah Clifton Hill ($40) was fine, silky, and elegant with great fruit and an incredible finish. My wife’s favorite. 91-93 points. The other was the 2007 Bunnell Syrah Horse Heaven Hills ($38) which was much bigger, huge even. I was surprised how much I liked this given my proclivity for more subdued wines. 92-94 points. 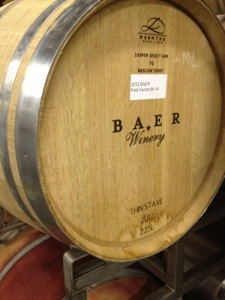 Just around the corner was a winery that was high on my list. Whenever anybody ever suggested wineries to visit in Woodinville, invariably, Baer Winery was included. We were greeted by none other than Les Baer, the owner and father of the deceased founder of the winery. He graciously showed us around the premises–through the barrels and production area, giving us the ‘lowdown’ of the process. We then tasted through just three wines, only two of which were available for purchase. We bought both. The first was the 2011 Baer Winery Shard ($19). Bright and clean, with nice fruit. They were offering a three pack for $49, so we bought three to drink while in Seattle (but we were leaving the next day….). 87-89 points. The other was the 2009 Baer Winery Callisto ($46) a new bottling of mostly Cabernet (75%) and Merlot (15%) with splashes of Cabernet Franc and Malbec, the wine was shy to show its fruit at first, but clearly well made and built to both last and be served with food. My wife fell in love with it, and I did too. 91-93 points. 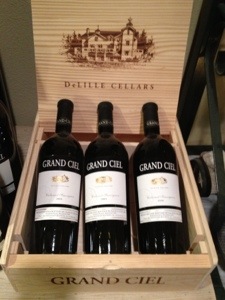 Sadly, they were not pouring any of this….

It was getting late, but there was one more winery on the list and one of the two (along with Baer) that I had contacted before the trip: DeLille Cellars–the other winery that was unfailingly included on the ‘must visit’ lists. We arrived shortly before closing, but the staff could not have been more welcoming, particularly Deb Stadelman, the tasting room manager. All the wines were outstanding, specifically the 2011 DeLille Chaleur Estate Blanc ($35). With 62% Sauvignon Blanc and 38% Semillion, this is a classic Bordeaux blend, and the wine is equally as expressive (if not more) than almost all of the white Bordeaux I have tried. Tart, yet balanced with great citrus fruit and honeysuckle flowers The finish would not stop. Fabulous. 91-93 points. The other standout, the 2010 DeLille Cabernet Sauvignon Lot One ($62), was a wine that was only available for the wine club, but Deb let us sneak a taste. And what a taste it was. Huge fruit and huge tannin but yet still in balance. This is a big wine that needs a bit of time (10-15 years?) to calm down, but when it does–watch out. 92-94 points. We were able to convince Deb to let us buy a bottle of this one–don’t tell anyone….

We then jumped in the car and made our way back to my wife’s sister’s house, with a case (plus) of wine and hungry bellies. My father-in-law did spit a few times over the course of the afternoon, so he was able to fulfill his navigator duties on the way back which was a blessing since I have absolutely no sense of direction and my wife might be worse.

I have been an occasional cycling tour guide in Europe for the past 20 years, visiting most of the wine regions of France. Through this "job" I developed a love for wine and the stories that often accompany the pulling of a cork. I live in Houston with my lovely wife and two wonderful sons.
View all posts by the drunken cyclist →
This entry was posted in Tasting, Travel, Wine and tagged Baer Winery, Bunnell Family Cellar, DeLille Cellars, Father-in-law, Mark Ryan Winery, Woodinville. Bookmark the permalink.