I had a couple of friends coming over for dinner and as I went through my cellar, I came across this bottle of old white Burgundy. There are only a few people on the planet that I thought might enjoy trying this wine, and a couple of them were coming over. I had been saving it for good friends who live in Paris—but who knows when we will see them in Philly again? Besides, I have more than a few bottles saved up.

After some brief contemplation (maybe a whole 37 seconds), I pulled this bottle and plopped it into the freezer for a quick chill (the freezer discussion will be saved for another time). As I am wont to do, I like to think a bit about the year of the wine and what was going on in the world and in my life, so I started thinking about the year 1980.

Around the time that this wine was being made, there were 52 American hostages in Iran; the U.S. had boycotted the Summer Olympics in Moscow; and Elton John performed a concert dressed like this: 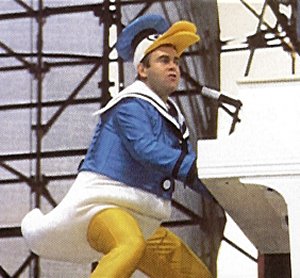 And I was starting high school in suburban Detroit. I hated high school. Or maybe high school just hated me. I was tall (6’1″) and thin (125 pounds). OK, I was emaciated. I also had the quintessential ’70’s haircut: The “butt cut”.

Not a good look.

Why did I buy this wine again?

Why? Well, even though I did not know anything about the producer and it was not a great year (and the year was not a good one for me), it came from one of the storied vineyards for White Burgundy. If it was good, it should be memorable. If not, well, my haircut at the time would be the best part about my little trip down memory lane. 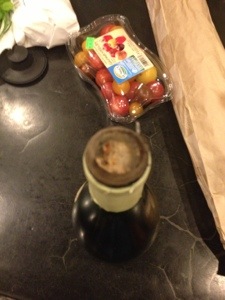 That is a view of the cork from the top.

The cork had me worried: I was concerned that I would not be able to extract it since my luck with older corks is not all that good. For once, I actually had the forethought to use the Ah-So, but that was a bit of a fiasco—it took me almost five minutes to get the cork out. For every centimeter that it advanced out, I seemed to push it back in another centimeter and a half. Finally, after coxing it out, I realized that the cork was in very good shape, a good sign for the condition of the wine. It was also an indication that I could have used a more traditional corkscrew. Proof again that I just can’t win.

I broke out the Bordeaux stems for the wine, in part because I thought it might improve the aromatics. We were also going to be drinking some Napa Meritages later and I had little to no desire to clean all of those stems afterward.

1980 Lequin Roussot Bâtard-Montrachet: Retail ??? I paid $15 (Yes, I know….). Pouring the wine into the stem, it was slightly golden, but certainly no cause for concern. Then there was the nose. Wow. I could have sniffed that sucker all night long. Great tropical fruit with bits of honey and caramel. On the palate, almost all the fruit had faded, but there were hints of apple and pear. Despite the lack of fruit, the wine was oddly, incredibly balanced. My only regret was that I was not able to taste this wine, say, ten years ago, but I am not complaining in the slightest. Outstanding. Very difficult to score since it was really outside of “normal” wines, but I would opt for this over many of the 90+ Chards out there any day of the week.

I have been an occasional cycling tour guide in Europe for the past 20 years, visiting most of the wine regions of France. Through this "job" I developed a love for wine and the stories that often accompany the pulling of a cork. I live in Houston with my lovely wife and two wonderful sons.
View all posts by the drunken cyclist →
This entry was posted in Chardonnay, Wine. Bookmark the permalink.