Posted on August 14, 2014 by the drunken cyclist
Last month, as most of you now know, I attended the Wine Bloggers Conference in Buellton, California. On Saturday afternoon, a bunch of my fellow bloggers and I decided to skip out of the second installment of Live Wine Blogging as well as the awards ceremony (since none of us were finalists this year–yeah, bitter grapes–pun intended) and head into town for dinner. After nearly a solid week of tasting over a hundred wines a day, we decided it might be a good idea to go grab a beer before dinner. I am by no means a beer drinker, but it does serve to wipe the wine-soaked palate clean.
The ringleader of our little troupe was Chris Taranto, the Communications Director of the Paso Robles Wine Country Alliance. We met Chris a few days earlier on the pre-conference excursion to Paso Robles, and he came over to Buellton for a few days of the Conference. For the beer, Chris took us to the Figueroa Mountain Brewing Company, where we were to meet Chris’ friend, Kyle Knapp, the assistant winemaker at Beckmen Cellars, who was bringing some bottles from his own label, Press Gang Cellars.
As we sat down with our beers, Chris told us that he had not seen Kyle for a while–not since they used to surf together “back in the day”. Growing up, I often fantasized about becoming a surfer myself, but since the closest body of water was Lake Erie, that was simply not going to happen. By the time I actually made it out to California, I was far too “wise” to take up the sport (of course, one could insert the word “chicken” for “wise” and probably arrive closer to the truth).
So given my never realized childhood dreams, and about to be confronted by a real live surfer, who was also a winemaker, I did what I thought was natural: I decided I would not like Kyle.
A few minutes later, Kyle walked up and he definitely had a “surfer dude” look to him (not liking him was going to be easier than I thought).

He also had really great hair–all the more reason to resent the hell out of him.

From the Press Gang Cellars website: Kyle and his wife Savanna.

After some brief introductions, we all started chatting a bit. Kyle grew up in nearby Lompoc, but did not start working in the wine industry until his mid-twenties, when he worked the 2005 vintage at Beckmen. He started his own label a couple of years later, and today he produces 300 cases of mostly Rhône varietal wines that he sources from Ballard Canyon, the Santa Ynez Valley, and Paso Robles.
Conversation then switched over to more personal topics and when Kyle started talking about his infant son, Milo, his face really lit up. At that precise moment, something rather unfortunate happened:
I realized that Kyle was a really nice guy, and despite my determination, I was not going to be able to dislike him.

We finished our beers, and piled back into Chris’ car to drive to the restaurant. We were headed to the Hitching Post II—yes, the Sideways restaurant— where I had dined several times before, and I always liked even though it is a bit dark, a bit dingy, and a bit overpriced ($42 for a sirloin steak?). But we could bring our own wine if we paid the $25 corkage fee, so off we went.
Soon after being seated, Kyle started unpacking his wine box. Soon after pulling out his wines, we all realized they were really fantastic. Soon after realizing they were really fantastic wines, we started drinking a lot.
We eventually became “that table”–the one that is so loud that all the other diners then become part of that table–whether they want to or not.

2012 Press Gang Cellars Santa Ynez Valley Roussanne: Retail $26. A bit of a muted nose with some floral notes sneaking through. On the palate I was really surprised. Perhaps the best 100% Rousanne I have ever had. Restrained, elegant, and beautiful. Outstanding. 91-93 Points.
2013 Press Gang Cellars Savanna Rhea Grenache Rosé: Retail $20. Dedicated rosé (and named after his wife). There are few things I love more in my life than a dedicated rosé–a wine made from grapes that were grown to be a rosé (as opposed to a saignée). This wine is a rock star–a bit of a muted nose, but bright fruit, perfect acidity. Outstanding and at $20? Wow. 92-94 Points. 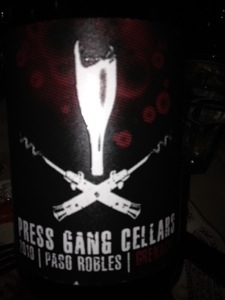 2010 Press Gang Cellars Paso Robles Grenache: Retail $32. Big. Really big. Balanced but big. Did I mention big? Not my style and a bit of a derivation from the more delicate whites, but big red lovers will eat this up. Outstanding. 89-91 Points.
2010 Press Gang Cellars Paradise Road Syrah: Retail $32. Not as big as the Grenache. Great balance and wonderful fruit–this was much more up my alley and fantastic with the steak. Outstanding. 91-93 Points.
Many thanks to Chris and particularly Kyle for such a fantastic evening.

I have been an occasional cycling tour guide in Europe for the past 20 years, visiting most of the wine regions of France. Through this "job" I developed a love for wine and the stories that often accompany the pulling of a cork. I live in Houston with my lovely wife and two wonderful sons.
View all posts by the drunken cyclist →
This entry was posted in Grenache, Roussanne, Syrah, Wine and tagged Chris Taranto, Kyle Knapp, Paso Robles, Paso Robles Wine Country Alliance, Press Gang Cellars. Bookmark the permalink.