Opening up the Wallet a Bit at Il Desco in Verona

Posted on September 22, 2016 by the drunken cyclist

As many of you know by now, I was in Italy for a couple of weeks and I eagerly tried to expand my horizons when it came to Italian wine appreciation. I tried wines that I never heard of, wines suggested by servers and sommeliers, wines that I had always wanted to try, and a few wines that I knew rather well.

Despite this seeming disparity, there was a common thread—they were all fairly inexpensive, which I see as wines that cost less than 50€ in a restaurant. Since I realize that any such self-imposed limit is arbitrary, I would occasionally violate it, depending on the wine and meal in question. for the most part, though, we did not go all that crazy while in Italy when choosing wine in a restaurant.

Well, all that discipline was thrown out the window when we agreed to go with my wife’s former co-worker to Elia Rizzo’s Il Desco, a Michelin starred restaurant in the heart of Verona.

I love going to restaurants and I really love going to really good restaurants, but I have only been to a few “great” restaurants (at least according to the fine folks at Michelin). For the most part, I really don’t care about the differences between a restaurant where my wife and I will drop about $200 for the two of us and a spot where the bill approaches $500 and beyond. Why? Well, I guess I prefer the act of dining much more than the art of dining. Give me a well made pasta or a finely grilled salmon over an Earl Grey Salted Caramel foam or an edible balloon.

Well, I was out voted.

So off to Il Desco we went. We all opted for the 125€ tasting menu (which was not as bad as I had feared) and while our dining companions were going to choose the majority of the wines, they did allow my to select a bottle of white for the earlier courses.

2013 Elena Walch Beyond the Clouds Chardonnay Alto Adige: Restaurant 76€. I have tried a few wines from this producer (although never a Chardonnay), and they were superb, so I was confident with this choice. Served just slightly chilled–in fact, the sommelier refused to serve it more than a few degrees cooler than room temperature. Whoa what a nose: lemon drop accentuated with vanilla, I could smell this for a long while. On the palate it was oddly warm but oh so tasty. Liquid velvet with a big mouthfeel yet plenty of acidity. The finish lasted for minutes. At one point the wine got slightly too cold. The Somm was right–not as good. Once it warmed again? Whoa. Maybe the best Italian Chard I have tried. Outstanding. 93-95 Points.

The salmon tartare was nothing short of mazing (and a wonderful pairing with the Walch Chardonnay).

Even before the Walch Chard was even half empty, we moved onto the heavier reds (even though the menu was much more slanted to a series of white wines).

2007 Giuseppe Quintarelli Valpolicella Classico Superiore: Restaurant 102€.  Corvina, Corvinone, Rondinella. We drove by the winery earlier in the day, but for some reason, “we” decided not to stop. I argued to drive up, park the car, and ask for a tasting…

…but I was out voted.

Why? I am not sure. After all, the worst they could say is “no!” (and maybe punch one of us in the head, but since I am fairly tall, I figured I was in the clear on that one). Quintarelli is known as “the Master of the Veneto” and while I have not had any of his wines that were going for 500-800€ on the menu, this was sublime. Stewed raspberry and a touch of botrytis but the Somm assured me that there was none. Anise and chicory in the background. On the palate spectacular with some coffee notes. Really wonderful. 92-94 Points initially. After an hour open this really began to sing, which is amazing since it was already phenomenal. Outstanding. 94-96 Points. 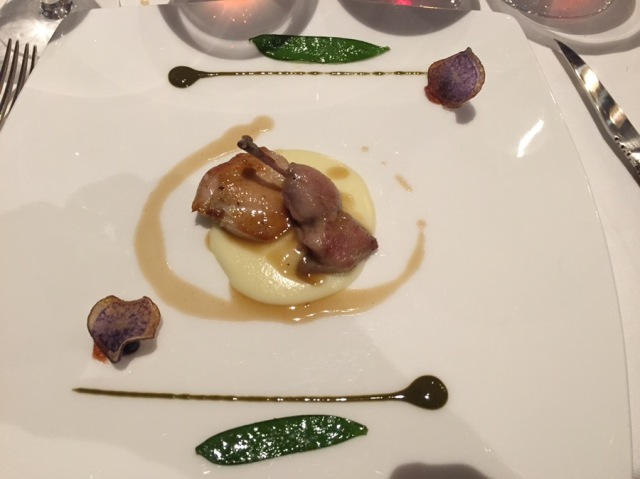 The quail was tiny, but sublime (and paired really well with the Walch Chard that I had left in my glass, but the others had moved on long before).

There was a brief interlude in the meal (I am only showing a few of the dishes), and I was able to wrestle the wine list away. I immediately noticed a wine a bit hidden, near the back of the list. It was just sitting there like that student who rarely says anything in class, but when he does, the comment is always spot on. Earlier that day, we visited Masi and tried the current release of this wine (2009). To my knowledge, I had never had a wine that was 100% Oselata, an ancient variety that Sandro Boscaini, the head of Masi Agricola, rediscovered when walking the vineyards several decades ago.

The wine was intense, juicy, and above all, meaty. We all purchased a few bottles of the wine partly due to its unavailability in the States, but also since it was pretty damned good. I wondered during the tasting how the wine would age, and here I saw a bottle with a bit of age that would show us. As such, I asked the sommelier to serve it blind—so as not to influence its reception. Not only did no one guess the wine, no one came close to the age as all guessed it was a much younger wine.

2001 Masi Osar Veronese IGT: Restaurant 80€. 100% Oseleta. A grape that is indigenous to Valpolicella and was all but forgotten. Masi resurrected the grape when Sandro was walking the vineyard one day and he came across this vine with peculiarly small berries. He sent it off to be analyzed and it turned out to be Oseleta. Masi now uses it in many of its blends but this is 100% Oseleta. Even at 15 years out this is incredibly youthful, yet dark and brooding. Great fruit. Just short of a whoa. Outstanding. 91-93 Points.

2007 Masi Amarone della Valpolicella Classico Campolongo di Torbe: Restaurant 194€. 70% Corvina, 25% Rondinella, 5% Molinara. Whoa. Where to begin? While I have always appreciated a fine Amarone, I always wondered about its appropriate place. For me, most Amarones are far too big to handle anything but the boldest, brashest beef brisket. I have also had my fair share of Amarone on its own, a meal in a bottle basically. I guess they are pleasant enough in such settings, but the sensory overload is so great, that I usually search for a bottle of San Pellegrino as an accompaniment. Before anyone goes ballistic and proclaims that I am the newly anointed heathen of the wine tasting world, relax. I really do like Amarone, it is just difficult for me to provide it a comfortable landing.  This wine is a perfect example—it is explosively expressive with intense aromas of plum, raisin, mocha, cinnamon, and pine needles. On the palate, another Whoa, as it overwhelms the senses with dark berries, intense mocha, vanilla, and, yes, some heat (16% ABV). There is not a lot of tannin on the backend, but the finish pleasantly lingers for quite a while. This smacked the quail about the head and face repeatedly, letting it know who was boss in the pairing (if one could even call it that). Still, an incredible wine. Outstanding. 92-94 Points.

2011 Anselmi I Capetelli Bianco Dolce IGT: Restaurant 70€. 100% Garganega. I have a soft spot for Anselmi that is well documented. This is honeyed tangerine and bright. Youthful but sophisticated. This is a wine that starts out great and only improves as you go along. I can’t remember an I Capetelli that did not get a Whoa. This is no exception. Holy Whoa-ness. Outstanding. 93-95 Points.

In the end, I believe we blew through over 500€ on the meal. Was it worth it? Well, I guess that is open to interpretation and in need to define “worth it.” I do know that I had a far better time than I had anticipated and the wines (particularly the Elena Walch Chard and the Anselmi I Capitelli) were firmly in my wheelhouse. So, would I do it again?

I have been an occasional cycling tour guide in Europe for the past 20 years, visiting most of the wine regions of France. Through this "job" I developed a love for wine and the stories that often accompany the pulling of a cork. I live in Houston with my lovely wife and two wonderful sons.
View all posts by the drunken cyclist →
This entry was posted in Chardonnay, Corvina, Corvinone, Garganega, Molinara, Oseleta, Rondinella, Wine. Bookmark the permalink.