Dreaming with a few Samples

Posted on February 10, 2017 by the drunken cyclist

Over the last few years, I have been fortunate enough to be sent some really nice wines to try, but they usually land on my doorstep in a random fashion. This week, as I was preparing another installment of my “Random Samples” I noticed that although not intended, the wines this go around did have a common theme that tied them together (at least superficially).

I noticed that all of the wines came from regions that I had never visited and all were near the top of my “bucket list” of regions that I need to visit at some point before my time on this planet is up.

The first two come from South America, a continent that I have yet to visit, but I am determined to get there sooner rather than later….

2014 Concha y Toro Marques de Casa Concha Chardonnay, Limari Valley Chile: Retail $20. Rich yellow, but clearly short of golden with noticeable oak on the nose, vanilla and lemon rind also playing large roles. On the palate there is surprising acidity, given the nose, and, coupled with the fruit, this is really a solid quaff. Silky but tart, this might even be gangbusters. Nice. Very Good to Outstanding. 88-90 Points.

2014 Trivento Amado Sur Malbec, Mendoza, Argentina: Retail $14. 79% Malbec, 11% Bonarda, 10% Syrah. Trivento has to be near the top of high-value producers, and their Amado Sur might likely lead the pack. Excellent fruit combined with a racy attitude and a touch of backbone. One certainly could do a lot worse for $14. Very Good. 87-89 Points.

These next three come from Portugal–while I have spent considerable time in Europe, very little of it has been on the Iberian Peninsula and none of it in Portugal. Everyone I know that has visited this tiny sliver of a country has raved about it and insisted that it is a must.

2015 Esporão Assobio Branco Douro Portugal: Retail $15. 35% Viosinho, 25% Rabigato, 20% Verdehlo, 10% Gouveio, 10% Arinto. My first reaction? There are a bunch of varieties in this wine that I am fairly certain have never crossed my lips. After getting over that wine-geek giddiness, this wine has very nice tropical aromas and flavors, with ample acidity and a flinty aspect that renders it even more refreshing. Not an overly complex wine, but there are moments in your life when less complexity is exactly what you need. Very Good. 87-89 Points.

2015 Esporão Assobio Tinto Douro Portugal: Retail $15. 40% Tinta Roriz, 40% Touriga Franca, 20% Touriga Nacional. Like most people in the U.S., I guess, my exposure to Portuguese wines has largely been limited to Port (although I did serve a Portuguese red at my wedding). Thus, when I was offered to sample these wines from Esporão, I jumped at the chance. Like the white, this is much more restrained than wines from U.S. shores, and that is perfectly fine with me: Darker red berries (blue and black) seem to prevail on the nose with a smattering of black pepper and licorice (again, black). On the palate those dark berries transform into redder, less ominous fruit, which dances well with the acidity. This wine will not “knock one’s socks off” with its power, but it is a perfectly delightful wine that would work well with a multitude of meals. Very Good to Outstanding. 88-90 Points.

I spend a bit of time daydreaming every day. Not your stereotypical “what would I do if I won the lottery?” kind of daydreaming (I don’t play the lottery—it is a tax on people who can’t do math), but more of a “If I could only visit one more wine region—one that I have not visited before—which would it be?” Well, I have to say that Sicily is right up near the top. Donnafugata has long been a leading producer from the island, and I was happy to sample a few of their wines. 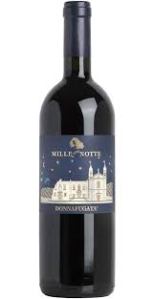 2011 Donnafugata Mille e una Notte Rosso Sicily: Retail $55. Nero d’Avola, Petit Verdot, Syrah, e altre uve (and other grapes). I am not sure if anyone else blends together these three varieties, but if others do, it has to be a fairly short list. Nero d’Avola, Sicily’s signature black grape, can be rather coarse with firm tannins and require extensive oak exposure. Similarly, Petit Verdot (despite its name) can produce big and bold wines that can often be difficult to tame, which is why it is mostly used as a blending variety, as it is here. As a result, it is quite surprising how mellowly delightful this wine is: brilliant nose of dark fruit, rich mocha, and a dash of smoke. On the palate, this is completely approachable—no doubt the six plus years of aging have been beneficial. In fact, this is more than approachable, this is lovely. Alone or paired with just about any protein, this wine continues to evolve, causing more than its fair share of introspection. Outstanding. 92-94 Points.

2011 Donnafugata Tancredi Rosso Sicily: Retail $40. Cabernet Sauvignon, Nero d’Avola, Tannat, e altre uve (and other varieties). I did not try the two of these side by side (unlike other wine writers, I tend to drink wines one at a time, with a meal—you know, like “real people”), so I was surprised that I initially liked this wine a bit more than its more expensive brethren. Great fruit (fleshy red and dark berry), secondary aromas (tobacco and black licorice), and a full, luscious mouth-feel. As the bottle lay open for a while, the fruit subsided a bit, diminishing ever-so-slightly the over all impression (compared to the Mille e tuna Notte which gained steam with time). Still this is a fabulous wine particularly for near-term consumption. Outstanding. 91-93 Points.

I have been an occasional cycling tour guide in Europe for the past 20 years, visiting most of the wine regions of France. Through this "job" I developed a love for wine and the stories that often accompany the pulling of a cork. I live in Houston with my lovely wife and two wonderful sons.
View all posts by the drunken cyclist →
This entry was posted in Arinto, Bonarda, Cabernet Sauvignon, Chardonnay, Gouveio, Malbec, Nero d'Avola, Petit Verdot, Rabigato, Syrah, Tannat, Tinta Amarela, Tinta Barroca, Tinta Roriz, Tinto Cão, Touriga Franca, Touriga Nacional, Viosinho. Bookmark the permalink.

6 Responses to Dreaming with a few Samples