Riding the Vines with Ken Freeman

Posted on September 21, 2017 by the drunken cyclist

This past Spring, on my most recent trip to the Bay Area, I did what I normally do: I dropped the wife and kids off at my in-laws’ house in the East Bay and quickly jumped in a car and headed west, toward wine country. This time, it was slightly different as I spent most of the time away from my family in Napa Valley, a region that I had long since abandoned for what I felt was the more interesting and compelling Sonoma County, directly to the west.

Even though I am working on a new-found appreciation for Napa and visited several wineries on this trip (Ehlers Estate, Crocker & Starr, Hourglass, and Onward—coming soon, I promise!), I still carved out some time to traverse the Mayacamas Mountains and return to Sonoma.

I had a few appointments on the ledger, but I was particularly interested in one: Freeman Vineyard and Winery. I had been a big fan of Freeman long before I started this blog (which is quickly approaching its sixth anniversary), having discovered them over a decade ago through my still extant obsession with American Pinot Noir.

Although my aging memory is foggy, I believe I first visited Freeman back in 2006, when I met then Assistant winemaker Eric Buffington, who showed me around the idyllic property just outside of Sebastopol. We then headed into the man-made cave to taste the winery’s Chardonnay and three Pinot Noirs, which Eric had crafted under the purview of Ed Kurtzman, consulting winemaker to many successful Pinot Noir and Chardonnay labels throughout the North Coast.

The winery has gone through a few changes since then: Eric left the winery to be closer to his burgeoning family and focus on his own brand, Amelle. While Ed remains a consultant, Akiko Freeman, wife and co-owner (along with husband Ken Freeman) assumed the role of head winemaker, after years of tutelage under Monsieur Kurtzman. And the winery has added two estate vineyards and wines.

Until running into Ken Freeman at the International Pinot Noir Celebration last Summer, I had no idea that Ken was and avid cyclist. Thus, when he proposed that we get together at some point for a ride, I filed it in the “Don’t be a moron and forget this invite” folder.

So, this past spring, while on yet another visit to the in-laws, I decided to take Ken up on his offer, and he accepted. I loaded up my California bike (the trusty steed that I kept at my in-laws’ house—my in-laws have since moved to Houston, about 100 feet from our own house) and drove west one Wednesday morning to meet up with Mr. Freeman for a bit of pedaling and Pinot.

I just love where Ken stores his bike.

Ken took me on a glorious route, mostly in the Russian River Valley appellation: we went up Vine Hill Road to Eastside Road into Healdsburg, and back to Vine Hill via Westside Road. In all 40 miles of not-too-hilly terrain, which was perfect for me since I have not had many rides with any significant elevation since moving to Houston (the city is completely flat).

After the ride and a quick shower, we headed into the cellar to taste through the latest Freeman releases:

2015 Freeman Ryo-fu Chardonnay Russian River Valley: Retail $55. A blend of several different vineyards (Keefer, Heitz, Black Emerald, Searby). The name of the wine comes from Kiko’s native Japanese, meaning “cool wind”—akin to the cool, foggy breeze that comes in off the Pacific Ocean, cooling down the Russian River Valley every summer night. Ryo-fu is the only Chardonnay produced by Freeman (which is too bad) and accounts for just under 700 cases of the total production of 5,000 (almost) cases. Rich and textured with great acidity and varied tropical flavors, but this is far from being too bold. Lovers of great Chardonnay should put Freeman at the top of the list. Outstanding. 91-93 Points.

2014 Freeman Sonoma Coast Pinot Noir: Retail $40. 46% Rayhill Vineyard, 29% Campbell  Vineyard, 25% Yu-ki Estate Vineyard. The third straight vintage under the extreme drought, the yield was about half of “normal” but the quality was once again stellar. Great dark cherry and blackberry, bookended by spice and silky tannins. This “entry level” Freeman still has considerable life ahead of it, but it is far too tempting to wait. Outstanding. 90-92 Points.

2015 Freeman Keefer Ranch Pinot Noir, Russian River Valley: Retail $65. One of three vineyard designates in the Freeman line-up, this wine comes from the well-known vineyard in the center of the Green Valley sub-appellation. A blend of the Mariafeld (Clone 23) and 777 clones, this wine spent 11 months in mostly 1-3 use barrels (26% new oak). The dark color exposes the concentrated nature of the vintage. A bit tight initially but deep cherry fruit and a profound floral aspect (rose?). On the palate, this is far more delicate than expected with intense fruit and vibrant acidity, and built for the long-haul. Sure, it is great now, but I want to taste this every year for a decade. Outstanding. 91-93 Points.

2014 Freeman Gloria Vineyard Estate Pinot Noir, Russian River Valley: Retail $70. The third vintage of Freeman’s first estate vineyard, is named after the ’85 hurricane that forced Ken, who was sailing down the coast, into an Atlantic port where he met Akiko. A blend of five clones that spends 11 months in 38% new French oak, this wine has an even deeper and darker crimson color and is even more floral than the Keefer. On the palate, quite rich but tempered by a lingering spiciness that coats the mouth. More opulent than the Keefer, and should require attention sooner, which is fine by me. Outstanding (and just short of a Whoa). 92-94 Points. 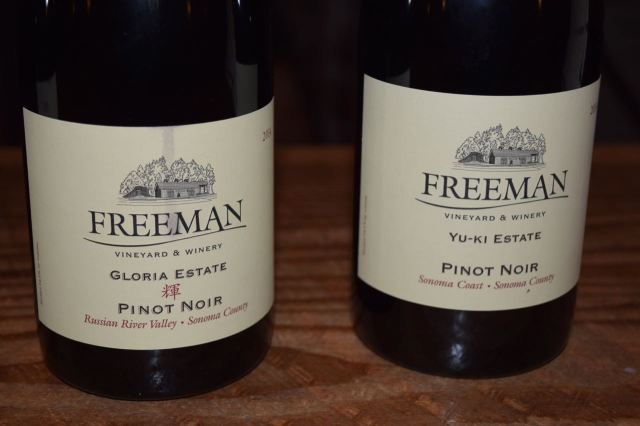 2014 Freeman Yu-ki Vineyard Estate Pinot Noir, Sonoma Coast: Retail $70. The Freemans bought a 50 acre sheep ranch in ’05 and planted 14 acres to several different Pinot Noir clones. The vineyard is named after Akiko’s nephew, which means “courage” or “big tree” (the vineyard is surrounded by old growth redwoods and the Freemans donated nearly half of the property to the Bodega Land Trust). A bit lighter in color than the previous wines, but Whoa. Intense fruit and plenty of earth on the nose, with bright cherry fruit initially on the palate followed by the aforementioned earth and then plenty of spice on the finish. This could use a little time but why wait? Whoa. Outstanding. 93-95 Points.

I have been an occasional cycling tour guide in Europe for the past 20 years, visiting most of the wine regions of France. Through this "job" I developed a love for wine and the stories that often accompany the pulling of a cork. I live in Houston with my lovely wife and two wonderful sons.
View all posts by the drunken cyclist →
This entry was posted in Chardonnay, Pinot Noir, Wine. Bookmark the permalink.