Last week, I published an article about my trip to Château d’Yquem. While the visit to Yquem was certainly slightly disappointing (understatement of the year?), the rest of the trip, organized by the wonderful people at Sweet Bordeaux (a division of Vins de Bordeaux) was remarkable.

On the same day as that fateful visit to Yquem, I visited two other producers in Sauternes, which not only served to lay a firm foundation in my appreciation of sweet Bordeaux, but also were memorable in their own right.

The sweet wines of Bordeaux are only made with grapes affected by Botrytis cinerea, a desiccating fungus that concentrates the flavors and sugars in the shrunken grapes. The Garronne River meets its tributary, the spring-fed Ciron River, near the town of Sauternes. In late summer, the Garonne is quite warm, but the Ciron remains quite cool, when they come together, the resulting mist coats the grapes, which leads to Botrytis.

We were met in the vineyard by the Château’s winemaker, Margaux Mavabiau Valeze, who looks barely old enough to drive one of the estate’s tractors much less to direct be the head of winemaking. In perfect American English (her father is American and she has spent a considerable amount of time in the U.S.) she quickly gave us a tutorial on which grapes were “properly rotten” as there are at least three types of mold that can attack the grapes—we were to select only the “good” or “green” mold and discard the bunches that were affected with white or black mold.

There was apparently much more of the bad mold in 2017, which made the harvest much longer, more difficult, more costly, and much smaller than normal. Harvesting grapes in general is not easy work, and harvesting in Sauternes is even more so due to the added selection process—it often requires cutting the bunches in half to verify that there were indeed “properly rotten.”

Look at me work!

Harvesting grapes must be somewhat easier when you are not 6’4”.

According to Margaux, we were performing the third (and hopefully final) pass of the vines  and after about 30 minutes, I had made my way to the end of my row with my bin only about a third full. Hearing that my labor was sufficient to make roughly two glasses of Sauternes was not exactly inflating, but it did serve as verification of why Sauternes is relatively expensive. 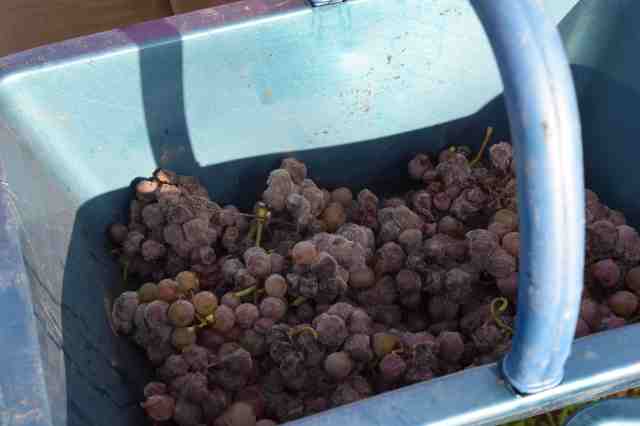 Probably the best grapes picked that day. I am pretty sure these were not mine. 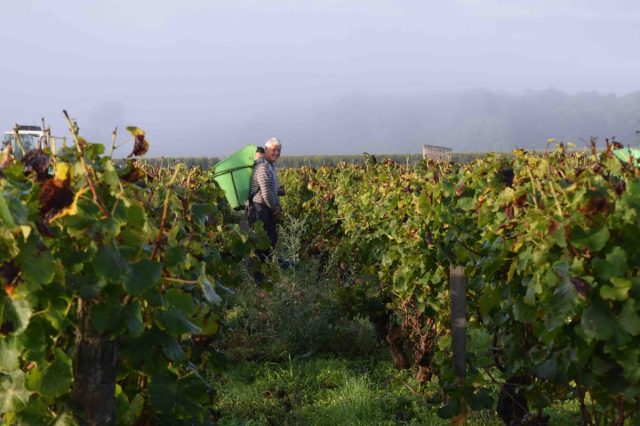 I felt guilty dumping my grapes into this guy’s bin, but he seemed nice enough about it.

Our hard work done (I am fairly certain that Margaux did not want us to ruin her harvest any further), we walked back to the winery to taste a few wines. Along the way, Margaux filled us in about the estate.

Bastor-Lamontagne has 52 hectares (130 acres) under vine, with 80% planted to Sémillon, 17% to Sauvignon Blanc, and 3% Muscadelle. In 2012, the then owners (the bank Crédit Foncier acquired Bastor-Lamontagne in 1936) started converting to organic, and the process was completed after the Château was sold in 2014 (Credit Foncier sold the Château to Florence and Daniel Cathiard who also own Château Smith Haut-Lafitte).

Harvest in Sauternes can take up to a month, at least twice as long as the red harvest in Bordeaux, once the fruit is all in the winery, the vinification process is twice as long as a dry white. Pressing starts at very low pressure, increasing gradually over several hours.

Then, after settling over night, the juice is taken of the solids that have settled out and fermentation starts in either tank or barrel depending on the wine. The grapes are brought in with 24-26% potential alcohol, but the fermentation is stopped by bringing down the temperature and adding sulfur, and then the wine is filtered to remove the yeast cells (and thus prevent any further fermentation).

We got to sample some of the juice that had just been pressed. Sweet!

The new owners have decided to take the winery in a bit of a new direction, wanting a fresher, leaner style of Sauternes. To that end, when the they brought in Margaux, who is young and female since the owners see Sauternes as a feminine wine. Despite her youthful appearance, Margaux did not start with Sauternes since, as she put it “if you start with Sauternes, you stay there since it is so specific.”

We then tasted the three current releases with Margaux.

2016 So de Bastor-Lamontagne, Sauternes: Retail 10€ (around $20 in U.S.). According to Margaux, Sauternes is typically a Christmas wine, so young people don’t really know how to drink it. This “So” is lighter, less sweet and even closed with a screw cap. Light and fruity, very nice. Comes from young wines and fruit from the last pass of the vineyards where the Botrytis has not had time to concentrate wine. Very Good. 87-89 Points.

2015 Château Bordenave: Retail 12€ ($20). The second wine of the estate, this comes from the original organic plot and is more labor intensive as it comes from older vines. Named after the name of the plot. Fermented and aged in barrel. Bright stone and apricot. Rich but still light. Fantastic. Outstanding. 90-92 Points.

2015 Bastor Lamontagne, Sauternes: Retail $30. 90% Sémillon, 10% Sauvignon Blanc. Oak noticeable (had historically used some American oak for aging but Jack Daniels has eaten up all the available oak so it is becoming harder to find) and plenty of pineapple upside down cake. Rich and unctuous but loads of acidity. Without a doubt, one of the better values in Sauternes. Might be close to a Whoa. Outstanding. 92-94 Points.

The visit to Château Bastor-Lamontagne served several purposes, while I had “harvested” grapes before, learning about the nuances of centuries-old techniques in Sauternes fostered an even greater appreciation for the wine. It also squelched any vestige of the notion that harvesting grapes was romantic and fun.

I have been an occasional cycling tour guide in Europe for the past 20 years, visiting most of the wine regions of France. Through this "job" I developed a love for wine and the stories that often accompany the pulling of a cork. I live in Houston with my lovely wife and two wonderful sons.
View all posts by the drunken cyclist →
This entry was posted in Sauternes, Wine. Bookmark the permalink.