Posted on January 3, 2019 by the drunken cyclist

A couple of weeks ago, I started recounting the two brief days I spent in Sicily with Donnafugata. After tasting through the white wines offered by the winery, we started on the many red wines produced by the leading Sicilian producer:

2016 Donnafugata Sur Vulcano Etna Rosso DOC: Retail $30. 100% Nerello Mascalese. While Nero d’Avola gets most of the attention as “the” Sicilian red variety, for me, Nerello Mascalese is much more appealing and exciting. From the slopes of Mount Etna, this evokes perhaps a juicier version of Pinot Noir: transparent, light cherry color with cherry, black raspberry. Light initially, but full of elegance and rich in character. It really starts to sing, albeit softly on the midpalate. Lengthy and lovely finish. Close to a Whoa. Outstanding. 91-93 Points.

2017 Donnafugata Bell’Assi Frappato. Dark cherry but still translucent. Bright, fresh, luscious red berry fruit on the nose with that same fruitiness on the palate. This is such a fun wine with oodles of flavor. This is a joy to drink and so much fun to say. 90.

2016 Donnafugata Floramundi, Cerasuolo di Vittoria DOCG: Retail $25. From the southern side of the island and the only DOCG in Sicily, which has to be a blend of at least 50% Nero d’Avola and a minimum of 30% Frappato. A bit darken the glass and much darker on the nose with black raspberry and plum. Really intense fruit with a jolt of tartness. This is big and full. With a smattering of tannins. Good now and up to five years. Outstanding. 91-93 Points.

2014 Donnafugata Tancredi Terre Siciliane IGT: Retail $42. A blend of primarily Cabernet Sauvignon and Nero d’Avola with Cabernet Franc, Tannat, and others used to finish the blend. This is categorized as an IGT since some of the fruit come from just outside the DOC. Really dark crimson on the verge of a blackish violet. Fantastic nose of blackberry jam, black pepper, plum. The palate is a gorgeous amalgam of red and black fruit, depth on the midpalate, and soft tannins on the finish. Very nice. Outstanding. 90-92 Points.

2014 Donnafugata Mille e una Notte Terre Siciliane IGT: Retail $85. Nero d’Avola, Petit Verdot, Syrah and other grapes. This is Donnafugata’s flagship red, in collaboration with famed Piedmontese winemaker Giacomo Tachis, father of the Super Tuscan, who died in 2016. Dark, but just short of translucent yet surprisingly not brooding. Whoa. Rich, but focused with impeccable balance. This has some tannins on the back-end, but the are soft and close to integrated. Nonetheless, this still could use a bit of time. But this should be on every winelover’s bucket list. Outstanding. 93-95 Points.

After tasting through most of the current releases available in the U.S., Baldo pulled out a few older wines before we moved on to the late harvest wines.

2006 Donnafugata Tancredi Contessa Entellina DOC: Retail $42. Nero d’Avola and Cabernet Sauvignon. Some bricking (orange-red color) on the rim gives away its age, but still great color. An older Cab feel to the nose but still that great red berry fruit. Certainly close to a Whoa if not decidedly there. Still plenty of tannin left too. One could argue that this could go another decade. At least. Outstanding. 92-94 Points.

2007 Donnafugata Mille e una Notte Contessa Entellina DOC: Retail $85. Almost all Nero d’Avola with small percentages of other varieties. A bit fresher with really dark fruit but also leather and tobacco. On the palate. Whoa. A bit astringent initially, but the fruit wakes from its decade long slumber and rolls in just before the midpalate. Restrained yet good power, this is a star. Outstanding. 92-94 Points.

Following the reds, Baldo brought out a couple of the winery’s most famous wine, the Ben Ryè, a dessert-style wine made from Zibibbo grapes, grown on Pantelleria, a Sicilian island off the coast of Tunisia (the variety is known elsewhere as Muscat of Alexandria, but let’s face it: Zibibbo [zeh-BEE-bo] is a lot more fun to say).

2015 Donnafugata Ben Ryé Passito di Pantelleria DOC: Retail $45 (375 ml). 100% Zibibbo. Deep golden color with hints of amber. The orange peel really comes through with loads of apricot, fig, even tobacco. Whoa. Just a baby though. Loads of acidity with a honeyed apricot. Holy cow. If you don’t love this wine we can’t be friends. Outstanding. 92-94 Points.

As amazing as the Marsala winery is, and as wonderful the wines were, I was really not prepared for the following morning. Baldo came and picked me up at my Marsala hotel at 7:00 a.m. so that we could get to the airport and catch our flight to Pantelleria, a tiny island which is technically part of Sicily (and therefore Italy), but is much closer to the Tunisian coast. 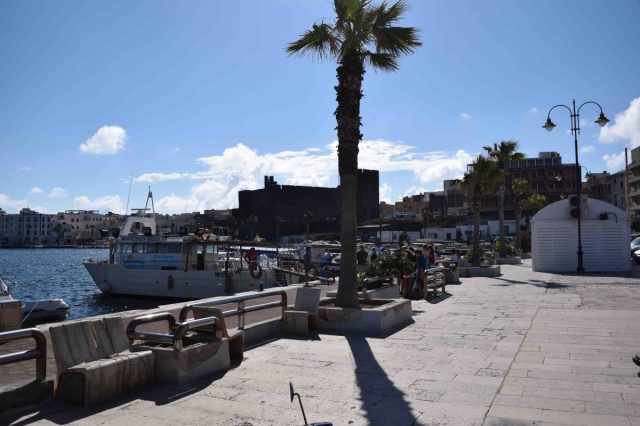 After landing, we jumped into a rental car and headed to Pantelleria, the eponymous capital of the island. Baldo asked if I minded strolling around a bit as he had a brief errand to run. “Not at all.” The Allies had flattened the town during World War II, leaving only the 16th Century Spanish Fortress (which was sadly poorly lit for this photo). 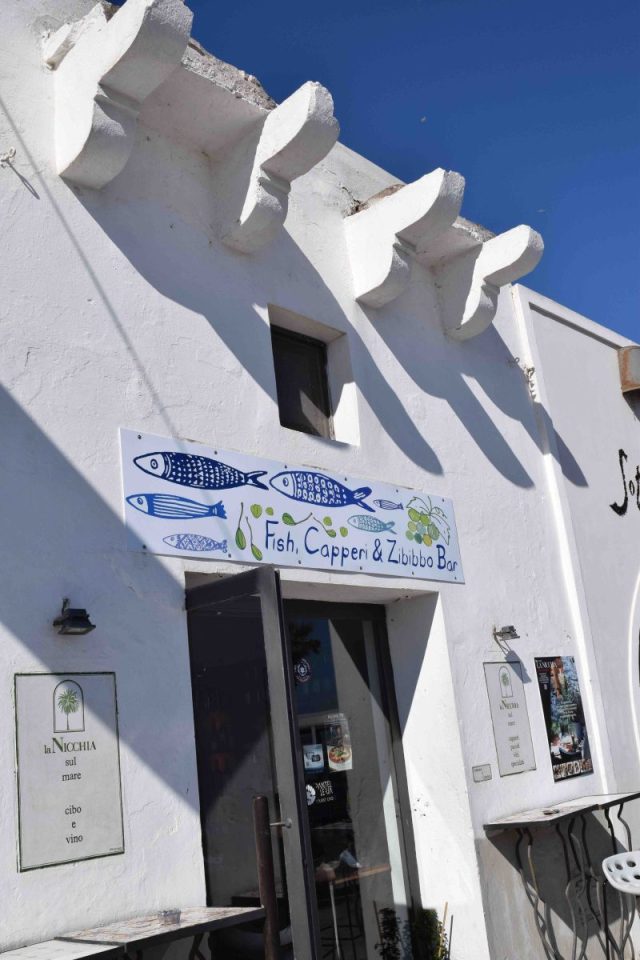 The town is tiny, but chockfull of little restaurants and even smaller shops.

The Specchio di Venere (Venus’s Mirror) is a volcanic lake surrounded by a caldera. Incredible. 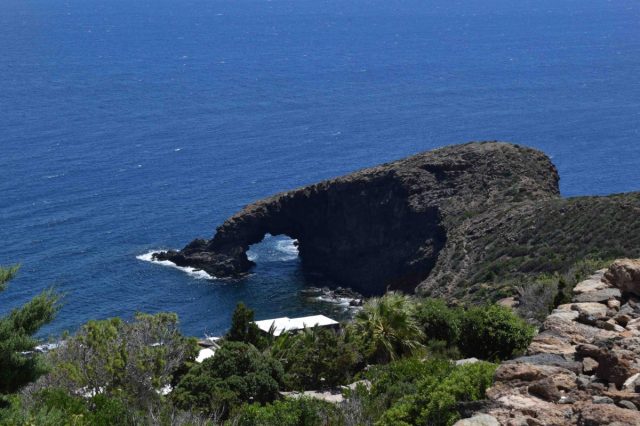 We eventually made it to Donnafugata’s winery on Pantelleria, which is almost too idyllic.

The ancient dwellings on the island were designed to capture as much rain water as possible as fresh water is scarce. 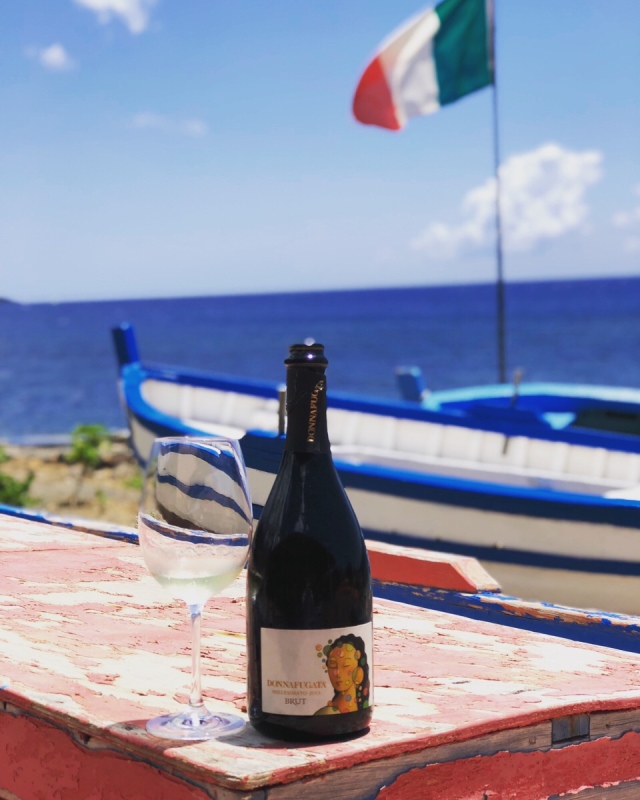 Our three-hour (of course) lunch was on the water, of course, with many wines from Donnafugata, of course.

I sadly had to leave Pantelleria, Sicily, and Baldo, for I was off to the north of Italy the following day, but I vowed to be back soon.

I have been an occasional cycling tour guide in Europe for the past 20 years, visiting most of the wine regions of France. Through this "job" I developed a love for wine and the stories that often accompany the pulling of a cork. I live in Houston with my lovely wife and two wonderful sons.
View all posts by the drunken cyclist →
This entry was posted in Cabernet Franc, Cabernet Sauvignon, Frappato, Nerello Mascalese, Nero d'Avola, Petit Verdot, Sicily, Syrah, Wine, Zibibbo. Bookmark the permalink.

2 Responses to Tasting More Donnafugata and Paradise Found on Pantelleria