A Conversation with WTSO: Closure

Posted on February 6, 2019 by the drunken cyclist

A little shy of three years ago now, I published what has turned out to be the most visited post on this blog (A Lawsuit Against Wines ‘Til Sold Out (WTSO)). That original post described, as the title suggests, a lawsuit against the online wine retailer, Wines Til Sold Out (WTSO), brought by a few customers who claimed that they were misled by the flash seller on the retail price of some of the wines sold on the site.

Close to a year and a half later, in January of 2018, I published an update to the original article (A Lawsuit Against Wines ’Til Sold Out (WTSO), an Update), which outlined the proposed settlement of the case, how it would potentially benefit WTSO customers, and how it would really benefit the lawyers who brought the class action suit against the company.

Last, this past November, I published the results of the actual settlement (A Lawsuit Against Wines ’Til Sold Out (WTSO), the Settlement), which was essentially the same as the proposed settlement. I also published a few of my thoughts on the whole issue, which varied from the mundane (I was not really going to benefit all that much), to the obvious (many [most?] lawyers are crooks). 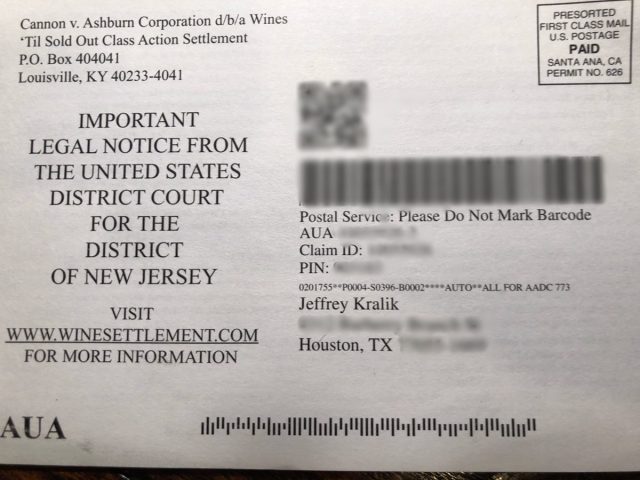 The postcard I received for the suit.

Just a day or two following the publication of what I thought would be my final article on the lawsuit, I received an email from Joe Arking, the President and CEO of WTSO. In a very cordial letter, he wanted to know if I would be willing to chat “about how WTSO sources and sells its wines, as there are some inaccuracies on this in your post.”

Never one who wants to be inaccurate, I responded almost immediately, affirming that I would be happy to speak with him. Due to busy schedules and then the holidays, we were not able to connect until a few weeks ago, when he called me from the WTSO office in South Jersey.

We had a very pleasant conversation and before I go any further, when I told him I was thinking of writing this article to clear up any inaccuracies, he said that while I could obviously publish as I wished, he just wanted to have the whole episode behind him and expressed that he would prefer that I just let it end with our conversation.

For a long while, I considered his request, but a recent purchase from WTSO made me change my mind.

Before I get to that purchase and what swayed my decision to publish what follows, here is a synopsis of what Joe and I discussed during our roughly thirty minute conversation.

Wines Til Sold Out started in 2006 when Joe and his older brother Elliott decided that they needed to get into the online wine business (they owned Roger Wilco, a series of wine shops in South Jersey). From the start, and Joe emphasized this several times, the company focused on the customer with every bottle; since the beginning and to this day, WTSO will offer a full refund for any purchase for any reason, not even requiring the return of the unopened bottles, a practice that costs the company $750,000 a year in lost revenue.

While Joe was loathe to talk about the suit, he did want to get the facts straight, even though it seemed pretty clear that the suit was personally very damaging to Joe. Sure, the company has taken a financial hit, but it seemed to me that he was equally (more?) damaged by the fact that he was sued by his customers, whom had always been his focus and concern.

WTSO and the plaintiffs negotiated a settlement (which I outlined in the posts mentioned above) to which the judge agreed, but on the last day to file an objection to the settlement, the federal government stepped in. The government felt that a) the attorneys were being compensated too richly (they received nearly $2 million as well as fees) and b) customers should not be paid in the form of a “coupon” to be applied to future purchases.

Facing another round of litigation and uncertainty over the outcome, the two sides agreed to settle out of court for the already negotiated settlement, and the case was dismissed with prejudice (meaning the plaintiffs could not sue again).

The main issue in the case were the wines that WTSO sold, essentially, under private labels. Basically, just about every large, well-known winery will, at some point, have excess wine on hand. It is either not quite up to the standards of their brand, or was left over after the blending had been completed. Often, this wine is sold on the “bulk” market where other wineries can use it how they wish as long as the original winery is not named. Other times, the original winery might bottle the wine under a different label and sell it at a lower price. They might acknowledge the relationship between the two brands, or not.

WTSO would often sell the wines in that last case: wine that had been bottled by a large winery under a different label, but were barred from using the name of the original winery.  Before the lawsuit, they would include a “retail price” for said wine on their site even though it was never actually sold at retail. That is where the lawyers saw (in my opinion) the chance to make a buck (or 1.8 million of them), and pounced.

As a result, WTSO agreed to give $2.00 for every such bottle purchased in the form of a coupon to be used on future purchases. In order to avoid future litigation, the company also offered $0.20-0.50 on every other bottle sold over a certain period (even though these wines were not included in the original lawsuit).

Customers who responded to the lawsuit (like me) were then given a year to spend their credits, up to $2 per bottle (the reason for only $2/bottle—Joe stated that WTSO is prohibited by law from selling wine for under cost and if they allowed for more than $2 off per bottle, some would be then less than cost).

Also, as a result of the suit, Jonathan Newman, the former Chair of the Pennsylvania Liquor Control Board and agent for WTSO (I erroneously suggested that he had some direct financial ties to WTSO), will no longer rate any of the wines on the site.

So why did I decide to publish this after all?

Because I think WTSO is a good company that really does put the customer first. Since WTSO now ships to Texas, I placed an order for some sparkling wine. When I tasted the first bottle, it was pretty flat—there were not many bubbles to go around. The same story with the second. So I emailed the company, not looking for a refund, but to let them know (the wine was still “good” and drinkable, it was just not what it should be)—I figured they would want to know and possibly contact the producer.

Within 24 hours I had a full refund. Not for 2 bottles, but for all 6, 4 of which are still sitting in my cellar. I do not know of another company that would do that.

There is another reason: Joe Arking seems like a good guy, even though he’s South Jersey (as a long-time resident of Philadelphia, I am required to say that).

2 Responses to A Conversation with WTSO: Closure