Posted on February 11, 2019 by the drunken cyclist

2009 Babcock Pinot Noir Grand Cuvée, Sta Rita Hills, CA: Retail: $45. Fairly light in the glass, just a couple of shades darker than a rosé, in fact, with aromas of black cherry, with elements of black pepper and anise. The palate is even more enticing with great fruit even a decade out (almost): great tartness, brilliant fruit, and near impeccable balance. Wow. Lovely. Really lovely. Bryan Babcock and his family are an institution in the Sta Rita Hills and the Central Coast, and this is the reason. Excellent. 91-93 Points.

NV Jean-Noël Haton Champagne Brut Classic: Retail $45. 60% Pinot Meunier, 40% Pinot Noir. This is not a world-beater, this is not (at least for us) a special event kind of bottle. It is, however, a perfect wine for a Thursday night after our son’s basketball game resulted in yet another disheartening loss (they have yet to win this season) and we were seeking solace in a bottle of bubbles. OK, we do not need a reason to open some champagne, in fact we more often look for a reason that we should not pop a cork of sparkling wine (we usually fail at that task). This wine is bright with citrus notes on the palate. Plenty of baked goods also dance on the nose and the palate, likely enhanced by the extra two years of bottle age (I bought these in late 2016). It did not make me immediately forget the loss, but it did cause me to pause when I heard there were still four games left to the season. Very Good. 87-89 Points.

2010 Château de Chassagne-Montrachet Saint-Aubin 1er Cru En Remilly: Retail $75. 100% Chardonnay. I bought these a few years ago from Wines Til Sold Out strictly due to my affinity for the wines of St. Aubin. Since I first traveling to Burgundy over two decades ago, the appellation represented a “value” in an otherwise insanely over-priced region, particularly for Chardonnay. Now, even my beloved St.Aubin is beyond my budget, but I still have a few in my cellar. Dark and a bit brooding for a white with secondary characteristics of lanolin and dried apricot. The palate is simply magical: great citrus and tree fruit, acidity off the charts, and a finish that lasts for minutes. Ok. Whoa. Excellent. 91-93 Points.

2004 Domaine Bernard Morey et Fils Santenay 1er Cru Passetemps: Retail $50. 100% Chardonnay. After another game (and another loss) I came home looking for some solace. I started, as is my habit, with a sample, a nice Vermentino from Oregon, but by thirst was not sated, but I wanted to stay with white. After pondering a few, I opted for this White Burgundy even though I was worried that it would be oxidized like so many of its brethren with a decade or more age on it. Since I figured this was likely bad, I would pop this and then quickly move on to another. Not so fast. Just slightly golden straw color indicated that this wine was not, repeat, not, oxidized. And the nose confirmed it: lemon curd with touches of white pepper, this wine was gangbusters from the jump. Great acidity, slightly creamy, with just hints of oak, this is not a top-level white from the region, but it is damned good. The appellation is usually defined as a bit coarser, a little rougher around the edges than its more famous neighbors to the north, but this is fantastic and easily the best of the three. Excellent to Outstanding. 92-94 Points.

2005 Domaines Schlumberger Riesling Saering, Alsace Grand Cru: Retail $40. My wife saws hosting a party for her co-workers and asked me to conduct a tasting for 20+ people. Sure? No problem? Don’t get me wrong, I love that kind of thing, but it started at 22, then dipped to 16, 12, 10, and settled on 8. No problem. I more than muddled thru, and it seemed like all had fun and learned at least a thing or two. Once done, the participants wanted more. Since they had seen my cellar, I could not hide behind the “Yeah, I don’t have any Riesling, would you like a Merlot?” So I pulled this. Whoa. Petrol and citrus on the nose with subtle fruit and oodles of minerality on the palate. This is a “Whoa” on many fronts, but I am still disappointed. Why? Since I could have held onto this for another decade. Excellent to Outstanding. 92-94 Points. 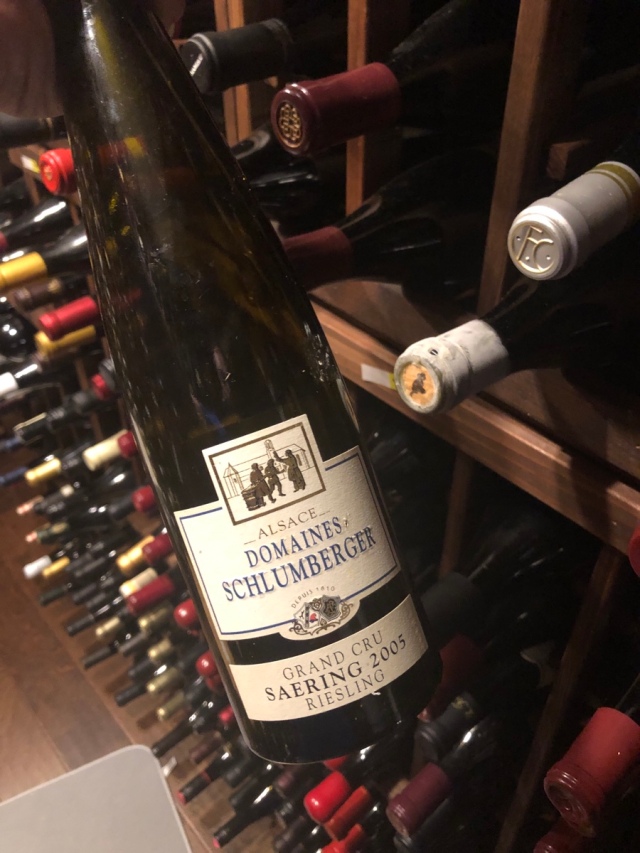 WINE OF THE WEEK: Oy veh, what a week. I guess I could say that on any given Sunday as I reflect on the previous seven days, so I am not sure why I feel the need now to exclaim thusly tonight. The week was packed as usual with basketball, dinner parties, and tasting wine. Lots of wine. So my “oy veh” was not a complaint but more of a realization that I am one particularly lucky bastard (in the figurative sense—I am pretty sure that my parents were married at the time of my birth, although my much shorter [and therefore slightly bitter] older brother claims to this day that my “real” father was the milkman despite the fact that milkmen had long-since ceased to exist at the time of my conception). Most weeks, I get to taste some fantastic wines, usually paired with exquisitely prepared food (unless I have made it, in which case it is “sufficiently edible”). This week was no exception, and although there were several contenders, as long as the 2005 Domaines Schlumberger Riesling Saering, Alsace Grand Cru, was not corked, it would have been the Wine of the Week. Why? Simple: I consider Alsace my second home, and no one there questions my parentage.

I have been an occasional cycling tour guide in Europe for the past 20 years, visiting most of the wine regions of France. Through this "job" I developed a love for wine and the stories that often accompany the pulling of a cork. I live in Houston with my lovely wife and two wonderful sons.
View all posts by the drunken cyclist →
This entry was posted in Champagne, Chardonnay, Pinot Noir, Riesling. Bookmark the permalink.