2008 Clos Pepe Estate Chardonnay, Sta Rita Hills, CA: Retail $35. I have lamented the demise of Clos Pepe innumerable times here on this blog, so pulling this cork was difficult. Since Clos Pepe has ceased to exist, this bottle of Chardonnay is an endangered species, and this is the last 2008 in my possession. A bit dark in color with lemon rind and celery root (?) lead to a surprisingly still fruity wine with lemon curd and citrus a-go-go. Even a slight bit of petrol, which surprised me for a Chardonnay. Close to a Whoa. Excellent. 91-93 Points.

2005 John Duval Wines Plexus, Barossa Valley, Australia: Retail $50. 50% Shiraz, 34% Grenache, 16% Mourvèdre. Wine is a funny thing. This is the last of four bottles that I had of this wine and based on my notes, no two bottles were the same, which lends credence to the adage that there are no good wines, only good bottles. Well, I should paraphrase since all bottles have been more than good, but two were clearly better, and this was one of those. Crazy fruit for a 14 year-old wine with boysenberry and plum predominate on the nose. There is a touch of the stewed aspect that I mentioned in my other notes, but it is minimal. The palate is rich and bold with oodles of fruit, a touch of spice, and a killer finish. Yeah, amazing. And a Whoa. Excellent to Outstanding. 92-94 Points.

NV Egly-Ouriet Champagne Grand Cru Tradition Brut: Retail $80. 75% Pinot Noir, 25% Chardonnay, 100% Grand Cru. I bought these from a guy in Philly, before we moved, who proved to be a complete jack-donkey (if you know what I mean). He proved it on several occasions, but I had already paid him for these wines (which were being shipped from France), so I had to put up with the clown for much longer than I would normally. Perhaps that is why I waited five and a half years before opening the first of the six bottles I bought. A bit dark in the glass with lemon and peach, honey, and freshly baked bread. Whoa. The palate has hints of fruit, but immediately gives way to yeastiness: brioche, bread, croissant. Whoa. Round and refined, yet tart and refreshing. Whoa. It almost makes me forget what I had to go through to… wait, what was I saying?  Outstanding to Outstanding Plus. 94-96 Points.

Sure, it has put on a little color—a deep yellow on the verge of gold—but I could just sniff this for hours: white peach, acacia flower, and a touch of petrol. While smelling it is wonderful, tasting is close to euphoric: brilliant acidity, still luscious fruit, and a minerality on the finish that lingers.

But, I think this bottle might be even better. I bought three bottles of this wine while I was visiting Alsace with my family October, 2009 when we toured the region by bike (it was really cold, so says my wife, but I was on a bike riding through vineyards, so as you might imagine, my worries were few). There were a few stops during the week where we loaded a few bottles into the trailer along with Sebastian, who was just a few months past one at the time. Since I was pulling our older son Nathan in a tag-a-long, my wife had Sebastian and the trailer, which she claimed was hard enough when only Seba was in the back. Luckily, Ernst Preiss is in Riquewihr, where we had rented an apartment for the week and thus I bought these while on foot. I think I was tasked to go out to buy milk, but two hours later I came back with these. Still fruity, refined, elegant. Whoa. And whoa again. Outstanding. 93-95 Points.

My wife walking a hill outside of Niedermorschwihr. She blamed the six bottles I bought on the need to dismount and push. Uh huh, sure. 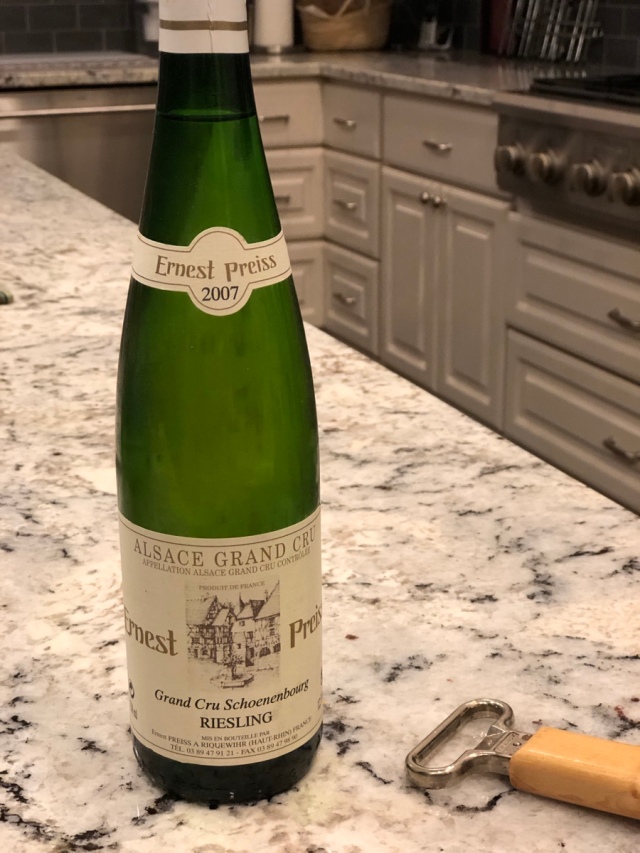 WINE OF THE WEEK: Choosing a Wine of the Week was no easy task this week as all four wines were clearly “Excellent” and three of the four inched their way into “Outstanding.” Wine, though, is not objective—context always plays a role (as much as professional tasters want one to believe otherwise). There are so many factors that go into how or why one appreciates a wine that it would be folly to attempt to list them here. For me, this week, the deciding factor was how I came to acquire each of the wines in contention. First, the Clos Pepe Chardonnay, which given that the winery no longer exists and this was my last bottle of this vintage, would normally be a strong contender, but I bought the wine as a “future” from the winery. Not exactly “sexy.” Second, the John Duvall Plexus, which boasts the name of the longtime winemaker at Penfolds, one of the top producers in Australia. A fantastic wine, also the last in my cellar, but one that I acquired through a now-defunct online wine auction site. Yawn. Third, the Egly-Ouriet Champagne was fantastic, even life-changing, but I bought it from a guy who turned out to be a complete “donkey-pit” and while time has healed that wound, still… So last, this week’s Wine of the Week, the 2007 Ernest Preiss Riesling Grand Cru Schoenenbourg, not only was an Outstanding wine, but it caused me to recall our family’s trip to Alsace and enabled me to print a somewhat incriminating picture of my wife, one that has never been seen before and may have to be taken down should my wife happen to read my blog today.

I have been an occasional cycling tour guide in Europe for the past 20 years, visiting most of the wine regions of France. Through this "job" I developed a love for wine and the stories that often accompany the pulling of a cork. I live in Houston with my lovely wife and two wonderful sons.
View all posts by the drunken cyclist →
This entry was posted in Champagne, Chardonnay, Grenache, Mourvèdre, Pinot Noir, Riesling, Shiraz. Bookmark the permalink.