Last Fall, I had the opportunity to ride my bike along the Southern portion of the Natchez Trace Parkway, a 444 mile long National Park that stretches from Nashville, Tennessee, across the northwest corner of Alabama, and down to Natchez, Mississippi.

While I learned to ride a bike when I was five or six, I did not really start riding until the summer after I graduated from college. Since then, I have gone through a dozen or so bikes, had a rather so-so racing “career” and have ridden probably around 100,000 miles  (which is a little more than four times around the earth at the equator, for those keeping score).

As far as I can recall, though, in all that time and with all that riding, I have only ridden 100 miles in a day once, and that was several years ago. Thus, when I received my itinerary from the kind people at VisitRidgeland.com the first line stood out a bit:

Complete 100 miles to Ridgeland- stops to include restrooms and water.

On a good day, I figure that would take at least five hours (but more like six), not including stops. Throw in a few stops, including an extended one for lunch, and we’re up to seven or even eight. Eight-hour ride? That’s beginning to sound a lot like work. A long ride for me is usually a third of that, as I rarely get much over forty miles on a given day, which takes two hours-ish.

But I had agreed to go and if I shied away from a long ride like that, there might be people who questioned if I could really refer to myself as a “cyclist.” Yes, that macho bullcrap was running through my thought process, but so was the thought that riding around 200 miles total in Mississippi would be good for me (yes, more macho bullcrap—despite popular opinion, cyclists can at least think in a macho way from time to time).

I figured I should probably train at least a little bit, which would also be good for me—getting out on the bike, getting some “base miles” in and getting used to having my butt in the saddle for multiple hours at a time. For those of you out there that do not do a lot of riding, that is the BIG concern. Sure, the legs are going to likely get tired, but the rear-end, sitting on a rather narrow, thinly padded piece of carbon fiber tightly covered with a thin slice of leather, is going to get sore, very, very sore.

The real problem? The week before the “big ride” I was scheduled to be out at the Wine Bloggers Conference in Walla Walla, Washington. It does not take much of an imagination to understand that there is quite a bit of drinking, er tasting, going on at that event. And not a whole lot of riding.

As I mentioned a couple of weeks ago, the night before the “big ride” I stayed at beautiful Brandon Hall Plantation, nine miles out of Natchez, right on the Natchez Trace Parkway.

After a restful night and a wonderful breakfast, I filled my water bottles, stuffed my pockets with various fruits and pre-packaged gooey substances and grabbed my trusted steed. 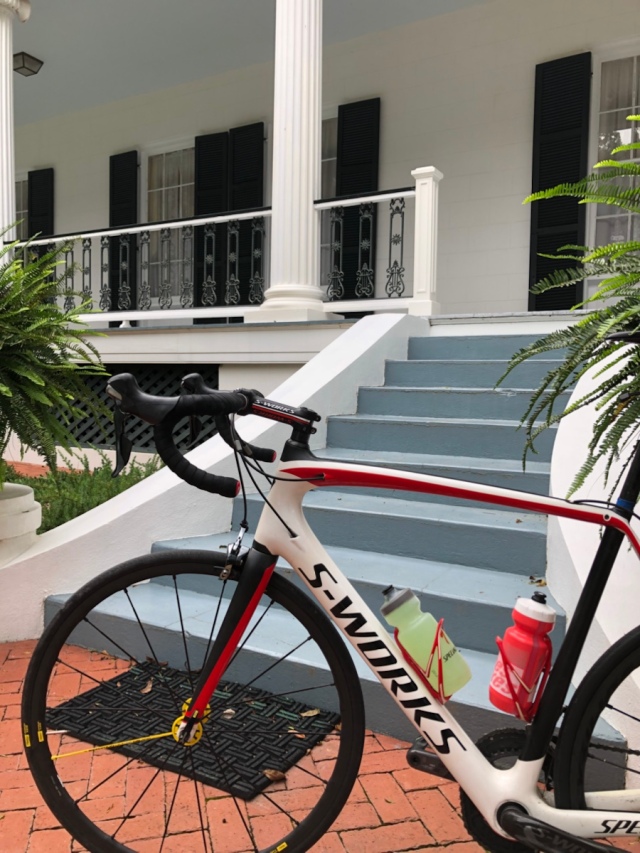 Since the Natchez Trace Parkway is part of the National Park System, there are no commercial enterprises along the route. At all. Thus, for large stretches of the parkway, there really is nothing but nature, which, as a bit of a city kid, I initially found rather boring. Since I was riding solo, my mind searched for activity and it settled where it often does: math. 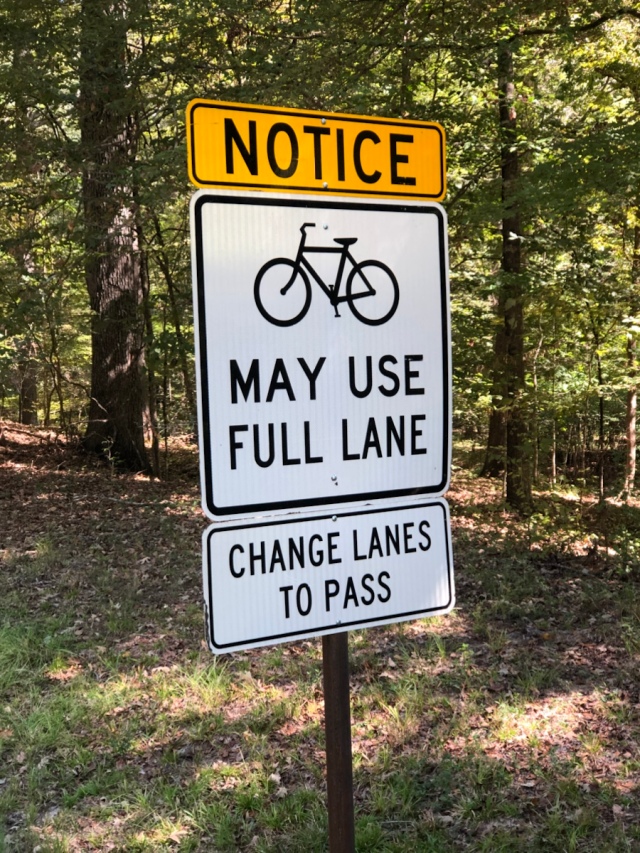 Yes, on long solo rides I usually do math in my head—and the most common sort of problem is performing square roots on random numbers. I wish my mind occupied itself with something a little sexier, perhaps memorizing vice-presidents or the periodic table of elements, you know useful information. But no, I usually work on squares and square roots while endlessly peddling circles.

I also like to reference the number of miles I have traveled and how long it should take to complete my journey. This is greatly facilitated by Strava, a GPS driven application on my phone that also gives a readout on my Apple Watch.

After only a few miles into the ride, though, I came across this sign:

I checked my watch. I had only ridden about ten miles. Crap.

After some quick math, I realized that by starting my ride at Brandon Hall, I was already ten miles up the Trace toward Ridgeland, meaning my ride would only be around 90 miles instead of the mythical century. I decided that I would find the hotel in Ridgeland and then ride another ten miles (about 30 minutes) to get me to triple digits.

That was my thought ten miles into the ride.

At some point fairly early into the ride, though, I realized that I was really missing a beautiful ride, while working on the square root of 2,650 (it’s about 51.48 in case you were wondering).

The Natchez Trace Parkway is simply gorgeous, as trees line either side of the Trace, forming pixilated patterns on the pavement as the sunlight filters through. From Natchez north to Ridgeland (a northern suburb of Jackson), the terrain is fairly flat, and relatively traffic free (although as I arrived in Jackson in the late afternoon, the number of cars increased significantly).

There are also historical markers every ten to fifteen miles, which really help to situate the significance of the region.

The first sixty miles or so were wonderful, near perfect pavement, stately trees, an occasional deer, birds of prey. Fantastic.

My butt started to hurt.

Thus, the last 20 miles or so were, well, agony. It had nothing to do with the Trace, it was as majestic as ever. No, my posterior was on fire and I needed it to end.

Finally it did, shortly after I saw this:

I had reached the end of my journey for the day, but I did not go 100 miles. But I didn’t go 91 miles either (Brandon Hall is technically at mile 9 of the Trace). No, I rode just over 82 miles (which included about three miles when I got a bit lost trying to find a 7-11 for some Gatorade—I have a terrible sense of direction, good thing there are no turns to be made once on the Natchez Trace Parkway).

Here is my Strava output from the ride: 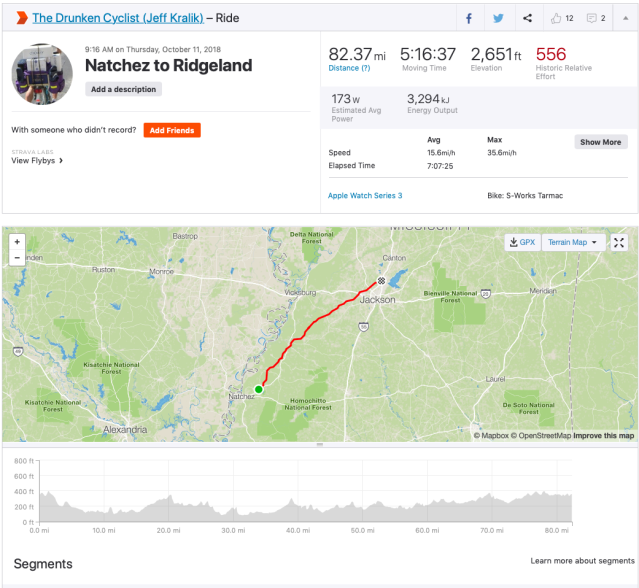 Still, not too shabby—18 miles short of a century. I considered for all of 12 seconds whether I should ride another nine miles, turn around, and complete the century. For the first second, I was ready to go. For the next eleven, my very sore buttocks screamed: “Oh, Hell no!”

More on Ridgeland and the rest of my ride next week.

I have been an occasional cycling tour guide in Europe for the past 20 years, visiting most of the wine regions of France. Through this "job" I developed a love for wine and the stories that often accompany the pulling of a cork. I live in Houston with my lovely wife and two wonderful sons.
View all posts by the drunken cyclist →
This entry was posted in Cycling. Bookmark the permalink.

2 Responses to Riding the Natchez Trace: 100 Miles* to Ridgeland