Posted on August 9, 2019 by the drunken cyclist

About a month ago, when I started tasting these wines, I had planned on talking about Jason and Janu Goelz, a ridiculously beautiful couple who make incredibly tasty wines. I had planned on focusing on Janu more than Jason (sorry Jason, but I am sure you get that a lot) since her story is fascinating: a Bollywood actress (despite not speaking a word of Hindi or Urdu), a fashion designer, a TV weatherperson (KRON 4 in the Bay Area, for those keeping score), and now winemaker and winery (Alara Cellars) owner, to name but a few.

Jason, for his part, has been making wine under the Jason Stephens Winery label for over a decade, but his greatest talent had to be convincing Janu to marry him (sorry Jason, but it’s true, and I think you know it).

I had also planned on talking about the town of Gilroy where they both make their wines. Until a couple of weeks ago, it is likely that few people outside of California had ever heard of Gilroy, California. I knew it well when I lived in the Bay Area, as Gilroy is home to one of the largest outlet malls in the country that I frequented quite often in my four years in California. (It turns out that Janu also worked at the Nike outlet there, and she no doubt sold me a dozen shoes or so–I am a bit of a shoe hound.)

Gilroy, which touts itself as the garlic capital of the world, became much better known, unfortunately, when a gunman opened fire at the Gilroy Garlic Festival on July 28th, killing four people (including himself) and injuring 13 others.

I had no intention of starting this post with the recounting (albeit brief) of another mass shooting. Since Gilroy, though, there have been another 18 mass shootings, so it is understandable, I guess, if you don’t remember what happened at the Gilroy Garlic Festival, but three innocent people were killed: Stephen Romero, age 6; Keyla Salazar, age 13; and Trevor Deon Irby, age 25.

I could not, in good conscience, publish the following notes without mentioning the tragedy (about which both Janu and Jason were interviewed by KRON 4: LINK). It is a shame that mass shootings have become politicized in this country and as a concerned father of two boys, I urge you to contact your state senators to pressure them to address the issue. Particularly if you live in Kentucky.

Oddly and uncomfortably, I now present my thoughts on Janu and Jason’s wonderful wines:

2016 Jason Stephens Winery Chardonnay Estate Reserve, Santa Clara Valley, CA: Retail: $30. I first met Jason Goelz in San Francisco at a steak house near my hotel. He is a charming fellow, with a beautiful winemaker of a wife (her brand is Alara Cellars). The fruit all comes from the Central Coast and the wines are magnificent. This Reserve Chardonnay is not an exception: fruity with just the right amount of oak, this is a middle of the road Chardonnay. It is not exceedingly fruity with no hints of wood, but neither is it an over-the-top buttery, oaky Chard that turns off so many these days. It is a Goldilocks wine, so to speak, that seems “just right.” Very Good to Excellent. 89-91 Points. 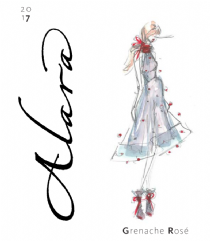 2017 Alara Cellars Grenache Rosé, San Benito County, CA: Retail $20. Pale pink with a decided orange tint in the glass with mostly strawberry, melon, and a bit of bubblegum. The palate is fruity and refreshing as it coats the mouth until the acidity kicks in about halfway through, which then becomes the story all the way to the finish. I often exalt the virtues of “True Rosé” on this site and this is precisely why: most saignées do not have the requisite acidity to balance out the wine. Initially, I thought this might be a saignée given its rather lush mouthfeel, but when the tartness comes in, it becomes clear that this is a True Rosé, made with a deft hand. Excellent. 90-92 Points. 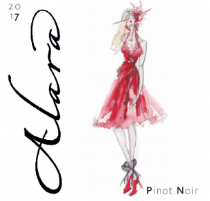 2017 Alara Cellars Pinot Noir San Benito County, CA: Retail $41. I guess I am like most people who have lived at least a bit in the Bay Area, when I hear “Gilroy” (where the winery is located) I don’t immediately think “Pinot Noir Country!” No, like almost all I think “garlic” as Gilroy touts itself as the “Garlic Capital of the World” and hosts a garlic festival every year to celebrate the region’s most planted crop, replete with all products garlic, including garlic ice cream. Yum? (There is also a rather large outlet mall, which I may have visited a few times when I lived out there.) This Pinot, should it prove to be representative, could change my opinion greatly. Quite fruity (cherry), floral (rose petals), and even spicy (cinnamon) on the nose, and very rich and fruity on the palate with plenty of cherry, said spice, and just a touch of earth. The tannins are silky and subtle, so I would drink this in the short term. Perhaps with some garlic fries? Very Good to Excellent. 89-91 Points.

2014 Jason Stephens Winery Merlot, Santa Clara Valley: Retail $24. 85% Merlot, 10% Cabernet Sauvignon, 5% Malbec. During a Twitter chat to taste several of these wines (which I participated in while at my son’s baseball game), many tweeters noted how “big” they found this Merlot. Well, it is dark in the glass, both in color and aromas–black tea, tobacco smoke, and ripe blackberry. The palate, while vibrant and rich, is not one that I would refer to as “big.” There is great fruit initially, with considerable depth on the mid-palate, and a lengthy finish, marked by impressive (yet soft) tannins. “Big?” Perhaps not. “Yummy?” Definitely. Excellent. 91-93 Points.

2016 Alara Cellars Tempranillo, Santa Clara Valley: Retail $39. Janu Goelz, the winemaker/owner at Alara, might only stand a shade over five feet tall, but she is not one to shy away from big wines. Rich and luscious red and dark fruit with hints of vanilla and oak, this Tempranillo only has a passing connection with its relatives from Spain. The palate is equally bold, with incredible fruit, but also intense acidity and a lengthy finish. Just a hint of tannin on the back-end, so I would drink this in the short-ish term (3-5 years). This will likely not remind anyone of a Rioja, but it is delicious. Excellent. 90-92 Points.

2014 Jason Stephens Winery Cabernet Sauvignon, Santa Clara Valley, CA: Retail $28. 77% Cabernet Sauvignon, 11% Merlot, 5% Malbec, 4% Petit Verdot, 3% Cabernet Franc. Fruity and funky on the nose (and I love the funk) with black pepper, blackberry, and a touch of bell pepper (likely from the Cab Franc). The palate is initially quite fruity and a tad hot (14.7%), but it calms down considerably on the mid-palate with more earthy flavors. The tannins are mostly held in check until the finish, where they assert themselves noticeably. Already five years old, this could easily go another 3-5 years with little worry. Very Good to Excellent. 88-90 Points.

I have been an occasional cycling tour guide in Europe for the past 20 years, visiting most of the wine regions of France. Through this "job" I developed a love for wine and the stories that often accompany the pulling of a cork. I live in Houston with my lovely wife and two wonderful sons.
View all posts by the drunken cyclist →
This entry was posted in Cabernet Franc, Cabernet Sauvignon, Chardonnay, Grenache, Malbec, Merlot, Petit Verdot, Pinot Noir, Tempranillo, Wine. Bookmark the permalink.