A Vis-à-Vis with Vis

Posted on September 18, 2019 by the drunken cyclist

As I mentioned a couple of weeks ago, after first thinking I was “Yugoslavian,” then Serbian, I decided to be Croatian for several reasons. As such, ever since the day when I “became” Croatian, I wanted to visit the country. Actually, I wanted to re-visit the country as I had been there briefly, visiting the capital Zagreb on my tour through many Eastern European capitals.

It was winter break during the year that I was studying abroad when I did the now-cliché “If it’s Saturday, I must be in Sarajevo” kind of trip, and aided by my Eurrail pass, I blazed through a couple of more “traditional” capitals for tourists (Vienna and Budapest) on my way to what I perceived at the time as my “motherland.” As a child, when I pressed my father for the origin of my last name–for which I was relentlessly teased–all he ever told me was we were from Yugoslavia, a country, which at the time, had maybe existed for fifty years and one that was destined to survive only a couple of decades more.

While my main goal of the trip was to visit the Balkans, hoping to find some answers regarding my ancestry, there was another aim. While I was in college, the Iron Curtain was very much still in place, and I wanted to take a peak behind it. I was studying Russian–both the language and history–in college and I wanted to see what “communism” was really like.

My Eurrail pass would not take me to Moscow, so I figured Budapest and the Balkans were the next best thing. (And honestly, I was relieved: Moscow in the winter? Ask Napoléon if that is a good idea.)

What I discovered on that initial trip to the Balkans was not the misery and dismay that we, as children, were taught represented communism, but rather the beauty of the region: Ljubljana  (now the capital of Slovenia), Zagreb (Croatia), and Sarajevo (Bosnia), all enticing and inviting cities. Only Belgrade (Serbia) was not all that compelling. In fact it was downright abyssmal, and it fell into that mold of “Big, Bad, Communism.”

On that first trip, I also gleaned from more than a single encounter, that I should visit the Dalmatian Coast, specifically Dubrovnik and Split, the two crown jewels of the region. I was further encouraged to make the trip to the coast in a warmer month, however, since it can be rather bleak there in December.

I heeded that advice and planned to return for Spring Break, to take a peek at the towns that were cited by many as the best that the country had to offer.

Unfortunately, on that subsequent trip (where the main destinations were Turkey and Greece), I ran out of both time (Greece involved a storm which delayed our ship, and a gun that was pointed in my face), and money (said gun was pointed by a cop–long story–and cash prevented the situation from becoming escalated).

Thus, I had to skip the coast entirely.

Since that spring, I have always wanted to return to the “motherland” (which after the breakup of Yugoslavia, shifted first to Serbia, then to Croatia, and now is Slovenia). Finally, some thirty years after that pesky police pistol helped derail my dream, this past summer I convinced the family to join me for close to a week on the Croatian (i.e., Dalmatian) Coast. I have already recounted our stays in Split and Dubrovnik, which were both marvelous, as was our day trip to the island of Vis, about a two-hour ferry from Split.

Compared to Split and Dubrovnik, Vis is much less assuming and far less touristy (although Mamma Mia 2 was filmed there, but I didn’t see it, and have no plans to do so–who needs an Abba earworm?), so it seemed perfect for a quick getaway. Vis is known for its beaches and caves, but we elected to rent scooters to police the towns and villages instead of spending the entire visit on another boat going around the island.

Here are a few pictures of our day there:

Coming into the port of Vis… 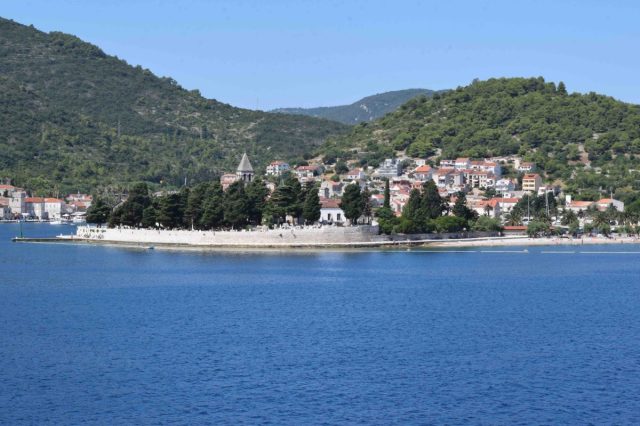 …I am always fascinated with where town meets sea.

I think this is the closest that my older son Nathan came to smiling all trip.

We rented scooters easily and we were on our way. Well, Sebastian and I were. Tammy decided that she did not want to drive the scooter (i.e., she wussed out), so she and Nathan took the bus.

We headed to Komiza, on the Western side of the island.

Seba, was a trooper, though I would not let him drive despite all of his pleas. 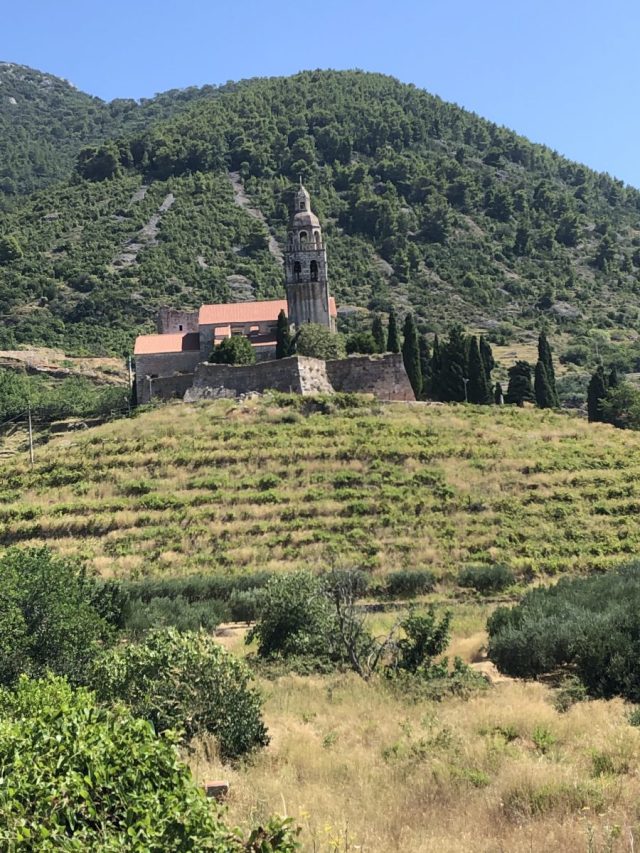 We managed to find vineyards… 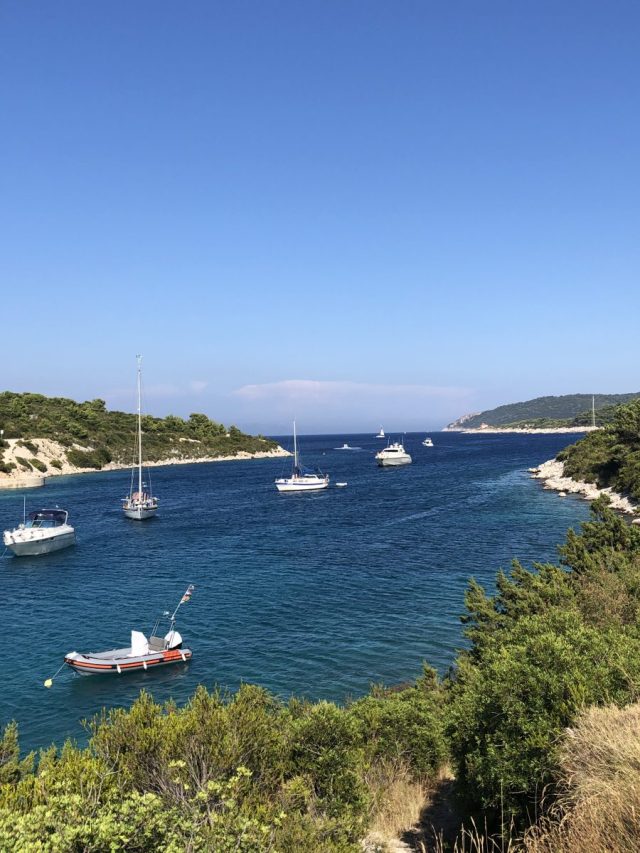 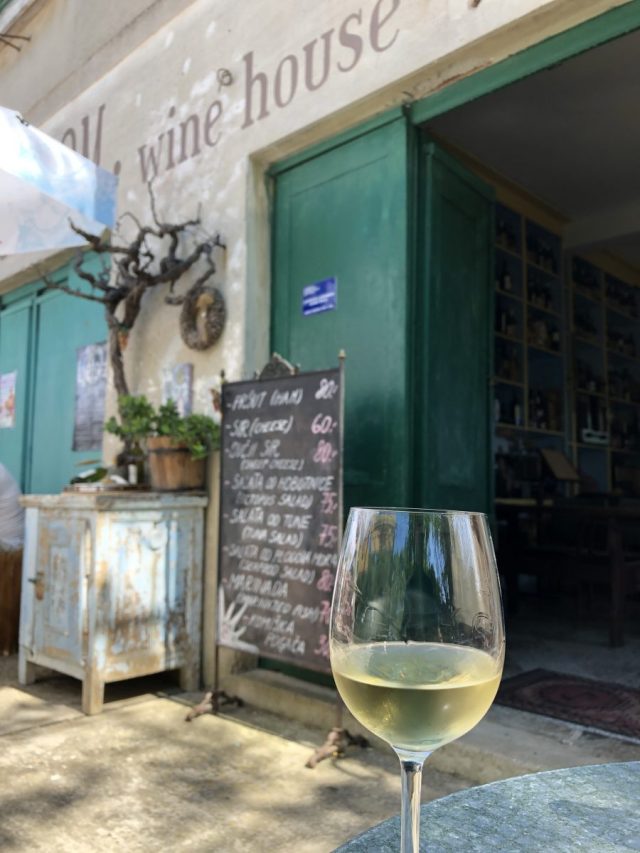 …and a wine bar for a glass of Vugava, a variety that is only grown on the island (or so the server said).

Plenty of photo ops, too.

We eventually made it back to Vis just in time to…

…catch our ferry back to Split.

On my next trip to my former homeland, I hope to get back to Vis to explore the coast and beaches, and maybe convince Tammy that she can actually handle a scooter.

I have been an occasional cycling tour guide in Europe for the past 20 years, visiting most of the wine regions of France. Through this "job" I developed a love for wine and the stories that often accompany the pulling of a cork. I live in Houston with my lovely wife and two wonderful sons.
View all posts by the drunken cyclist →
This entry was posted in Croatia, Vugova, Wine. Bookmark the permalink.

1 Response to A Vis-à-Vis with Vis